For Love Or For Memory? (Uncolored)

Home » Moon_Princess » Pictures » For Love Or For Memory? (Uncolored)

For Love Or For Memory? (Uncolored)

For Love Or For Memory? (Uncolored) by Moon_Princess 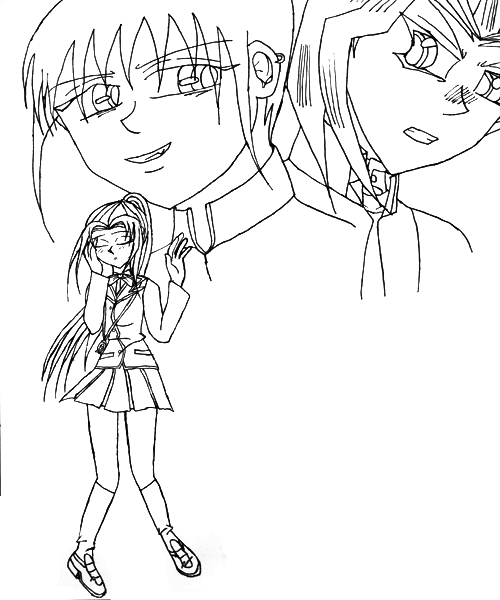 Yup, Yup! I'm going to start a small Doujinshi.
It's called, "For Love or for Memory?"
I know. Weird title. =_=;
I had Japanese on the picture, but I erased them. I'm gonna add them later.
Any the other guy on the pic, his name is Stev. It's a weird name...I made it up. :p
Anywho, he may not look like that in the comic.
I wasn't sure what his hairstyle was gonna be.
So just a heads up. lol
Anywho. Here's a small summery of the story:

Cat's having a normal day until she finds a girl getting attacked by a rare hunter. But when she rushed over to help, the rare hunter was already knocked out by a boy Cat's age.
She froze when she saw him. He explained that everything was fine now and turned to leave.
But Cat stopped him, asking for his name.
His name is Stev (I know it's kinda weird, but I thought it sounded cool at the time! x.x) and he leaves.
When Cat comes home, Yugi notices that there is something wrong with her, but Cat deny's it. She says she's just thinking.
Which is true.
The next day, Yugi is talking to his friends, telling them that Cat had no sleep last night and he's starting to wonder if there's something really wrong or not.

Cat is looking out over the city on the roof of Domino High.
She jumps when she heards the door shut, signaling someone came up. When she looked over...it was Stev!
They were both surprised to find each other at the school.
But no so long after the surprise...Stev gets an evil gleam in his eye...

Who is Stev and why does Cat seem to be shocked whenever she sees him?
I guess you'll have to read and see! ^-^

woooow...I'll bet he wa sher ex boyfriend or something

but it's really good

No, he's not her ex-boyfriend, cuz Cat never had a boyfriend. XD