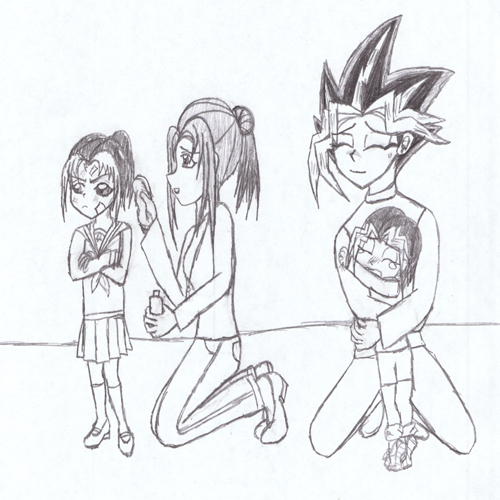 I sketched this when I was at school today. lol
Cuz I was bored...well, seriously, who ISN'T bored at school. x.x

But I also thought this would be a good pic to tell you a little bit more about Moe.
Well...she got into a fight.
She's supposed to be really strong for her age (she's 8 in this pic) and some kids were picking on her little brother
(the one crying in Atemu's arms (I'm using his old name for now), Taiyo. He's about...6 I guess in this pic.)
, so while she tried to defend him, she ended up losing her temper and getting into a fight with the kids that were picking on Taiyo.

Cat's telling Moe, while cleaning her wounds, that it's not good to pick fights with other kids, no matter what they're doing.

Yeah, Moe's got a hot temper. Lol
And Yeah...I know Cat and Atemu don't look too grown up, but they're in their 20's I think. (too lazy to calculate, but I'm pretty sure somewhere in their 20's.)
I tried making Cat look more grown up with different clothes, more mature eyes and lipstick. Plus her hair is in a weird bun...Yup.
I think it's hard for everyone to try and think what Atemu looks like all grown up. *sweatdrops*

aww...the kids are cute! X3 and the expressions are good...:D poor Taiyo, being bullied by those bad boys..*sigh* I should ask Amelynn and Reimond for help! XD

I already planned on making like 2 pics related to this!X3

One with yami x jini's family

LOL! cute ^^ I see no problem with having a hot temper *shifty eyes*

anyway ^^ great job for a sketch *thumbs up* They all look great, and Cat's a good mom.

That is just nice. What a nice family Cat and Atemu have.

They need ot be at least 28 or I'm gonna question when they had their kids ^^;

It's very cute. Moe has a temper...I wonder if Aelita helped to inspire that. She got my bed temper! ^^

LOL, mebbe she did inspire it. XD
But then again, I didn't know Aelita had a temper. ^^ lol