Main Characters for Under the Moon

Home » NereusXUnmi » Pictures » Main Characters for Under the Moon

Main Characters for Under the Moon

Main Characters for Under the Moon by NereusXUnmi 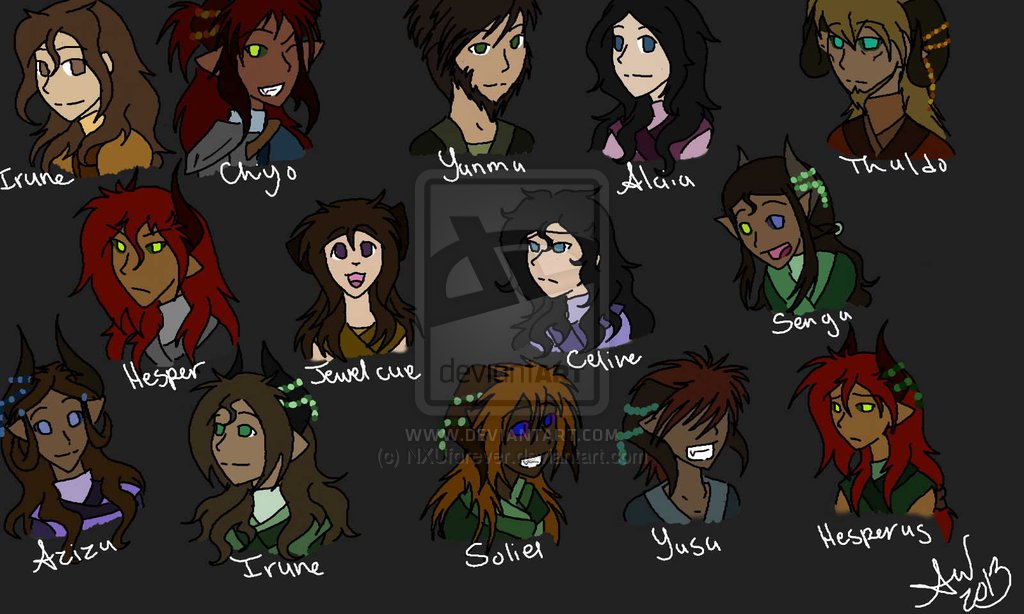 Okay this will be a rather long description since I will be explaining a simple of my characters, there are more but they either have one appearance in the story or a couple but they're not main characters. I'll do them one of these days. Anyway I'll be starting from top left to bottom right.

Story: She only appears in the beginning when she's saved by Chiyo but we get flashbacks and Chiyo and Hesper telling stories about her so she's technically a main character. Especially when Hesper names her daughter after her. She raises Hesper until she's four but is murdered by her village because of it.

She is the mate of Chiyo and mother of Hesper

Story: A good nature father but likes to prank and be annoying at times. She's one of my favorites cause I kinda see her like a father or a really loving kid stuck inside a adult. She's also competitive with Alaia and Yanma, since they're all parents they tend to be the only ones. She finds her mate murders four years later but she only finds her daughter six years later.

Chiyo is the Husband of Irune and father to Hesper

Story: Without him Hesper wouldn't even be alive to be with Celine. He is a kind man who rather spend his days with his fingers in the dirt then do anything else. Other then raise his daughter, and deal with Hesper.... and fight with Chiyo.

He is married to Alaia and is Celine's father

Story: Like Irune she's only mentioned in flashbacks and stories but halfway into the story she appears, she claims she had to run because her father planned to hurt both Yanma and Celine. She doesn't trust Chiyo and Hesper around her daughter.

She is married to Yanma and Celine's mother

Story: He appears as a distant main character but once we go into the second generation he's a close friend of Soliel's. He also suggests arranging a marriage for his daughter, Aziza to marry Hesperus. He is also a king to the Southern Lands.

He is the husband to Lalita and father to Aziza

Story: My first favorite and actually my first character I actually stuck with for almost six years. She's stubborn, protective, and rather hot-headed. After her mother died when she was four she spent most of her childhood surviving off the scraps the villagers tried to keep away from her. At age ten her father finds her and takes her in. I feel kinda sad that she had such a sad childhood and won't be able to see her daughter's first breath. But she and I hate fluff no matter who the person. She is murdered by Celine's ex-fiance, Yukio, who hired a demon slayer to kill her.

She is the Husband of Celine, father of Irune, and daughter of Chiyo and Irune

Story: A servant girl under the house of Chiyo Hilargi, she loves her master to death as if Chiyo was her father. She doesn't however like Hesper and joins in the pranking whenever she can. She's sweet, loud and has a mind for her own. She also has a big appetite for raw fish and unsweetened honey.

She is Hesper's arch rival at family reunions

Story: My second favorite and I kinda see her a supportive mother figure in my head. She's the second character I've stuck with for six years, I made her at the same time with Hesper. Odd I know. She has a thing for gardening and like her father, she would rather spend her time in the dirt then anything. Besides raising her family of course. At first she is against Yokai and would have never thought she would fall for one. She's sweet, caring and wise like her father however after Hesper is murdered she is quiet, timid and depressed.

She is the wife of Hesper, Mother of Irune and daughter of Yanma and Alaia

Story: I think the name is cursed, every time I name a little girl Senga they seem to die around four. She is sweet, naive and timid like her mother. She is also too curious for her own good, especially since her uncle is waging with her father. While she was playing outside her uncle's assassin got to her. The assassin was meant for her father but since she saw him he had to get rid of her.

She is the daughter of Aziza and Hesperus

Story: An adventurous woman who wants to see the world with her loved ones, luckily her husband will do anything for her. she is also timid, shy and mothering. Sadly the women of her family line have problems with their wombs and have problems carrying them to full term when they do carry to full term they're usually still births. Once her first daughter Senga passes away however she withdraws from her adventurous side and is more timid and quiet.

She is the wife of Hesperus, the mother of Senga and daughter of Thalbo and Lalita

Story: Named after her grandmother by Celine. Since she never knew her father she grew to hate Hesper, however when Celine spoke of the deceased Yokai Irune would grow attached to the stories. That attachment turned into a mental one-sided incest crush. When she gave birth to her daughter, Hesperus, that attraction turned to her daughter. Since the young girl looks like Hesper. Although the attraction did not happen quickly, at first she sought to alienate her daughter from the rest of the family. She felt no maternal love or any connection. However when her daughter starts to fill out, her mental attraction kicked in. She does not see her sickness and is stubborn when anyone points it out.

She is the wife of Soliel, daughter of Hesper and Celine and mother of Yasu and Hesperus

Story: A Prince in line for the thrown. She is the eldest daughter in a family of seven however her six other siblings decided to leave the palace and start on their own. She is a conflicted woman as well, she'll confuse the feeling of her heart with her mind and vise a verse. She is the loving father and somewhat naive to her wife's adultery with their daughter. Until she finds out however and thinks fast to save both her marriage and her relationship with her daughter.

Story: The eldest child of Soliel and Irune, he is a laid-back prince who rather not work for things in life, since he was spoiled by Soliel's father at an early age there is no way to get him to see the simple things in life. He gets the attention of many women and his parents then his younger sister. Once he finds out his childhood crush Aziza is arranged to marry Hesperus, he abandons his birthright to start his own kingdom. Since he wanted to hurt his younger sister he began to wage war with her as soon as she was crowned. He's devastated that his niece was killed in the process.

He is the Husband of Wilda, brother to Hesperus, and son to Soliel and Irune

Story: The lookalike of her grandfather Hesper, she is the youngest child of Irune and Soliel. Unlike her grandfather, she is shy and withdrawn, she rather be alone then have attention like her elder brother. Also unlike her grandfather, she is not fully female. She is a hermaphrodite. She has a good relationship with her great grandfather Chiyo and her grandmother Celine. Once Irune starts to show affection that a mother shouldn't, Hesperus is forced to keep it a secret yet tell anyone who would listen, no one ever knew. At age sixteen she meets her arranged wife Aziza and instantly fell in love. At the time of Senga's death, she becomes ruthless, cold and merciless.

She is the Husband of Aziza, father of Senga, sister to Yasu and daughter of Soliel and Irune

hey is your comic, just starting or is it complete or what, and also where could i read it for future reference?

It has been in my mind for at least six years but I am just now starting to draw it, there is more of this on my deviantart page but it is mostly one-shots. I'm currently writing it as a rough draft but once I get the right equipment I will be starting it in manga form. For now though it is mostly drawings with little parts of the story in the description. Maybe if I ever stop re-editing the first few chapters I will post them here but I am forever updating it. It is nice to know someone is interested in my work though, thanks for the comment!

your very welcome ^.^ i hope you cant "iron out all the wrinkles" in your story, for i love stories and i like it when people are able to finish good ideas :D