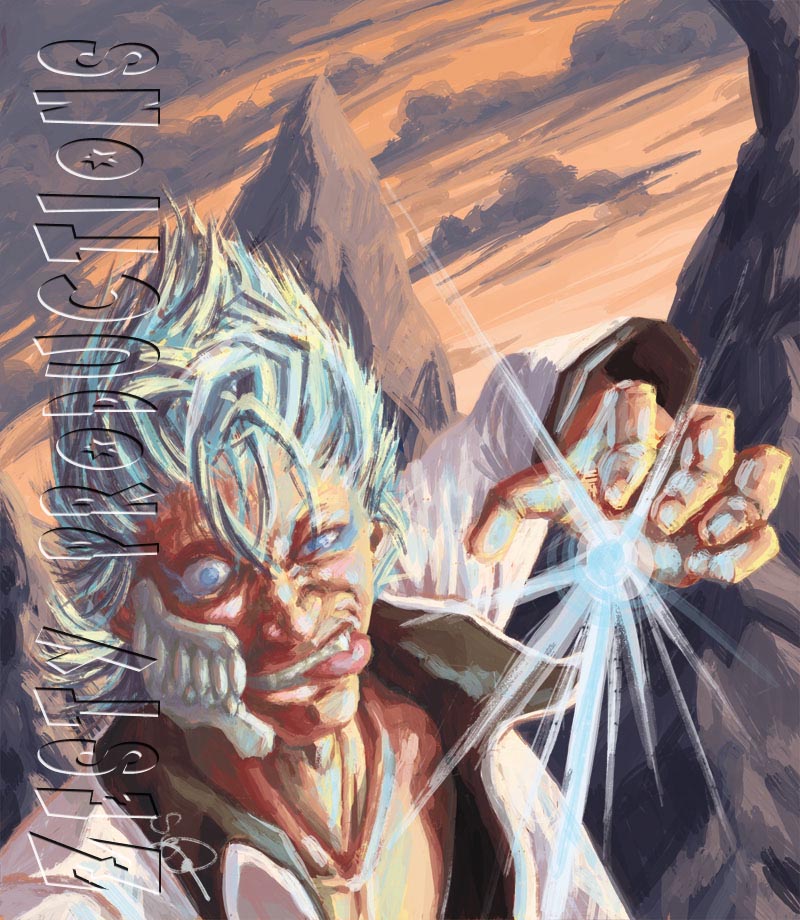 This started out as me wanting to draw some other Bleach character, and I thought, Grimmjow would be fun, so I doodled and used lots of warm colors and brush strokes for energy and then . . . my tablet died.

So I did some of this with a mouse, which wasn't working too well, so I borrowed a friend's tablet, but the pressure sensor wouldn't work, so I tried to reinstall the tablet driver, only I ended up deleting the one I had. So I reinstalled and uninstalled it about five times before I realized that when I rebooted the computer, the driver would . . . vanish. So I had to install the driver and then not restart the computer.

Which meant that every time I turned my computer on, I had to install the tablet before I worked on it.

And then I couldn't decide what I wanted to do for a background, which was originally just a flat color, but with the advice of my sister ("it sucks!") and my friend ("look through the manga"), I came up with what you see now.

But! But it's done, and I really like it, and now I can go do something else, yay!

Photoshop, too many hours

And, I used two different WACOM tablets, and Photoshop CS. But I got the brush from a friend who uses PS7, so it would probably look the same if I'd used an older Photoshop.

uu he looks so mad and into the fight..just like he real Grimjaw!!!i have to draw him as a request as well..good thing your pic reminded me that..:P

you are the 3rd case today that i hear someone having ps and co troubles..;p

Computers everywhere are freaking out. @_@

Glad you like the picture, and have fun drawing the request!

that is great and oh yeah first comment ^0^ WOOt