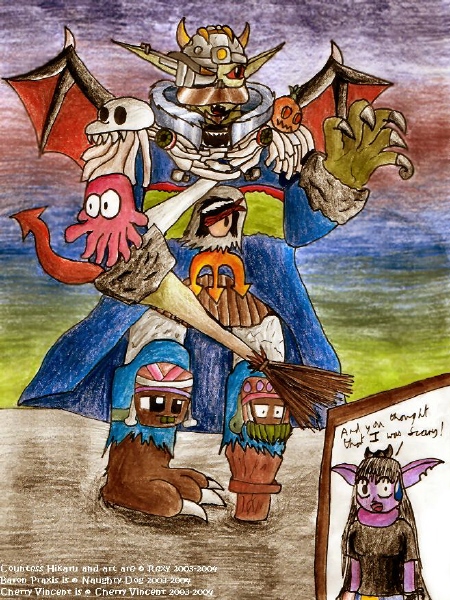 Let's be frank - even though I survived a week there, I'm still concerned about how my drawing time at University is going to stand. I have a comp in my room (WITH A SCANNER!) but I have a feeling that the timetable could push me at parts. o_O; Even though my friend Cherry Vincent's latest contest is going on until Hallowe'en, I really needed to get it done now so that I don't forget about it later. <br />
<br />
Either way, what she wanted us to do was to draw one of our fave game/anime/film/original etc. characters, and turn it into a demented monster, just in time for the Hallowe'en holiday. I've had previous spooky encounters by doing eight scribbles of various characters dressing up for the occasion last year (god's sake, I won't put them here though 0.o), and so I had enough inspiration to transfer - don't be surprised XD - Baron Praxis into a demon overlord of sorts. ^^<br />
<br />
Trying to deviate upon his regular appearance was a tough task to figure out, but I was glad to put in all the right touches to make this work out. Green zombie-like skin (and a bit of misshaping on the right ear), red devilish eyes, a pair of horns, vampire fangs and a snake tongue (sorry if that couldn't be defined much) do well to show a demonish showcase on the head, but I can admit I had more fun dealing with the rest of his body. XD<br />
His main thick coat was replaced by a thinner trenchcoat of sorts, with sharp aluminium cut for a new - and more dangerous - neckbrace to match. (take note of the bat icon locking it into place ) Replacing his shoulder pads are a dog skull and a pumpkin, and his main armor plates on his arms and legs are replaced by two voodoo masks and a live squid. I also gave him a couple of bolts on his chest, a slime-and-blood band holding a Vincent emblem onto it, and two very deformed hands - one of them's extended to form a pernamently-wedged broomstick, while the other's got a regular bunch of claws to deal with. Then there's his feet, where one of them's a furry werewolf-ish variation, and the other is a piratey wooden leg.<br />
And let's not forget those WINGS, ladies and gents!<br />
<br />
Odd combination, yes? But I think it's enough to freak people out, especially Hikaru on the bottom left corner :P<br />
<br />
[DISCLAIMER: This is my pic - Hikaru's also mine too, but the Baron belongs to the brains at Naughty Dog, and Cherry Vincent's "demonsona" (wtf?) belongs to Cherry Vincent. Nyah!]

why do people not comment on pics like this one?
I want to say that I have never played jak and daxter but I have heard alot about it, and this pic rocks!!!I see alot of work put in this pic, and I love every single detail, specially the right arm it´s so awesome!!X3
keep it up!