Peige ~ The Littlest Wastelander by Rexy 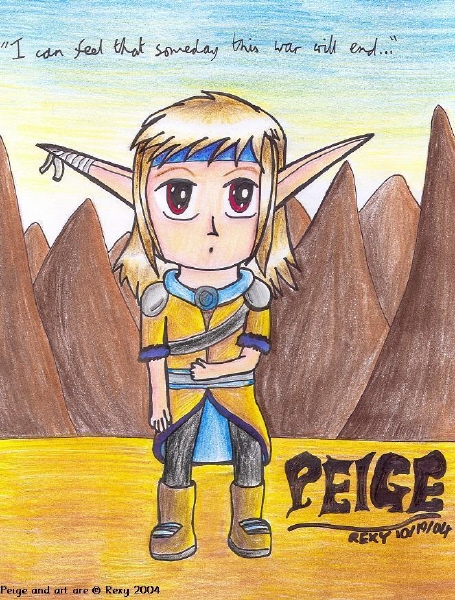 Fokes, this may be my last image for a week yet - as far as I know my time will be occupied by a brief amount of IT group work over the following week or so, and to match I have to get around to putting together a few pictures to mail to some people I know by the beginning of next week.<br />
And in this one, I ended up with a fair few Spargus-related ideas developing in my mind over the incoming weeks or so. I don't know why, ever since I fear that I may be disappointed with Jak 3. But heck, if he's there to try and twist around a few ends around Spargus City, it had to be. :)<br />
<br />
So, I would like you to get to know a child traveller by the name of Peige. Like Jak's child form, he's shown to believe in peace between individuals, and may look naive on the outside to match. He's also shown to be no older than 10, although I've yet to finalise on his actual age.<br />
No one knew where the boy came from, or how he managed to find Spargus City in the first place. But when he did, he ended up getting shunted by bigger Wastelanders shoving past him, with their thirst for Metal Head hunting and survival wedged into their own heads. Knowing the disadvantages between himself and the others, he knew that he would almost throw it all away.<br />
However, most of you may remember the fate for ex-Krimzon Guard commander Crista Tasai, as shown in a profile image I drew of her and Hikaru. The blonde ottsel ended up seeing into his state, and unlike the others... she ended up taking a helping hand and finding him somewhere to stay. She told him her side of the story, showing how Dark Eco and Metal Heads had already messed up her life several years beforehand.<br />
Meanwhile, the young boy refused to tell his past. But he did manage to show gratitude to the ottsel, even when he ended up saying that she reminded him of someone that he used to know. Although Crista spent many of her time wondering what he meant by that, the two then became an inseperable duo, helping each other around the extreme spirit behind Spargus.<br />
<br />
Bah... just after I scanned it I realised I forgot the shadow >_< oh well... I'm sure he'd fit without ^^<br />
<br />
(DISCLAIMER: My charrie, although it's based on species designed by Naughty Dog)

Sweet! He looks so cute! I love it!