Halloween - Ode To Vin by Rexy 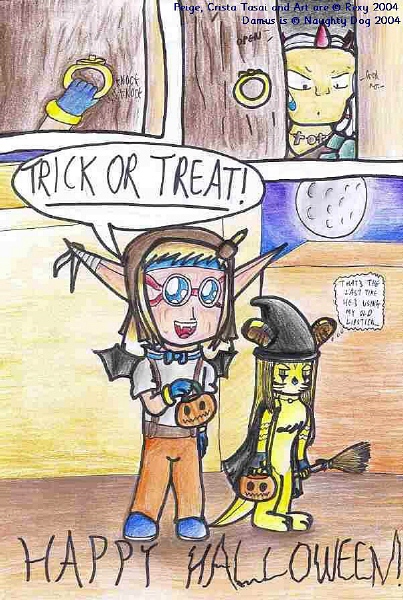 okay, so technically... this is a Jak 3 holiday picture, but it should still fit ^_~<br />
<br />
I know that Halloween was nearly a month ago, but this had to be uploaded anyway. Most of you will remember me doing eight scribbles of strong videogame "hero" characters, all dressed up for the occasion. If you want you can roam in the depths of my DA gallery to see them. This year... it's a comic! ^^<br />
Prior to the image I read up on what Halloween is all about, thanks to a friend's rant over some areas of America having Halloween held back this year due to its "interfearance" with Christianity and their beliefs on what Sundays are all about. I've then seen that the basic idea of it is that spirits are free to wonder when they choose during that day, as well as zombies being able to wonder the land and search for their old homes once more.<br />
Bearing that in mind, I had to give some respect to Vin's roles in Jak II. The mad scientist/tragic hero managed to do a lot of the city due to keeping Haven City's power station up in line. And so after bearing that in mind, Peige decides to dress up as him for Halloween, complete with fangs and vampire wings, with drawn scars on his body to symbolise where the Metal Heads attacked him. o_O; Take Crista isn't too pleased about it though - maybe she has a bit of a different thought on Halloween than him? o.O;<br />
<br />
First time I drew Damus too, and yet he still looked kinda weird himself No worries, maybe I could involve him in a future pic or so, depending on how Jak 3 turns out. Not quite on my most wanted list, but I'm still interested on how the story ends. ^_^ (DO NOT SPOIL ME FOR ANOTHER MONTH YET!!! X.x)<br />
<br />
(DISCLAIMER: I own almost everything here, but Vin, Damus and the species involved belong to Naughty Dog)

LOL! i think damas's face is just too funny! hehe...

It's Vin WOOT! Haha, this rocks!