A Villainous Melee by Rexy 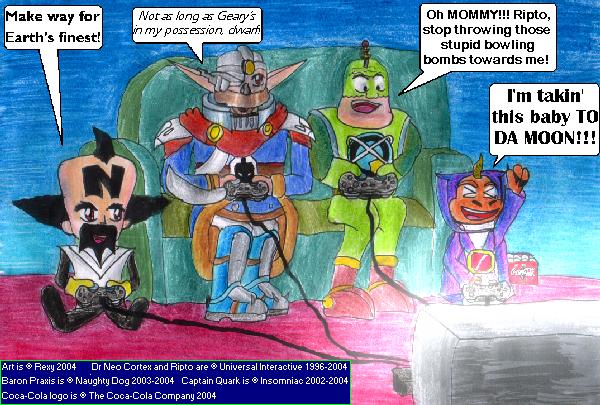 During my recent drawing past I was challenged to draw my fave characters playing their favorite game. I was a bit confused about this at first, but then again it didn't seem too hard. ^^<br />
Ever since my keen tastes lie upon villains, I've had to draw four of which locked in a room with nothing but a leather couch, a crate of Coca-Cola cans, and a TV plugged onto a PS2 with Crash Nitro Kart locked inside. <br />
Might as well roam through my final thoughts on how I did the chars :P<br />
<br />
DR NEO CORTEX - "Make way for Earth's finest!"<br />
Usually I can handle him just fine. I was just worried about his head shape, and the amount of hair I've given him too o_O; But as it is I've managed to make him fit the whole determined side of things. Plus, we can't have him without his infamous quote from CNK, ya? XD<br />
<br />
BARON PRAXIS - "Not as long as Geary's in my possession, dwarf!"<br />
I couldn't help but use the Baron to strike up a bit of a rivalry between him and Cortex, ever since Crash and Jak originated from Naughty Dog. ^_^; Again, I've found him a bit of a struggle, especially when trying to deal with the head proportions (@_@) but it's still worked well enough to satisfy my needs. ^^<br />
<br />
CAPTAIN QUARK - "Oh MOMMY!!! Ripto, stop throwing those stupid bowling bombs at me!"<br />
This isn't the first time I drew the big-egoed superhero from Ratchet & Clank - my earlier drawings of him have always turned out to be very weird, which have left me to be in a bit of a struggled scenario in this part of the pic. o_O; I'm still glad I caught his personality though. <br />
(Please note that I drew this pic long before I knew about the announcement of R&C3 - it was there that I assumed from playing Going Commando that I thought he'd be a permanent rival to Ratchet... guess not o_O)<br />
<br />
RIPTO - "I'm takin' this baby TO DA MOON!!!"<br />
First outing on trying to draw this highly-used Spyro char, and it wasn't easy ever since the reference pics I had were either too small or too odd (and I mean Enter-The-Dragonfly odd :P). I'm still happy with how his expression came out though, and is still a nice way to get a pretty peeved Quark to the left. And why not use a quote from Strong Bad Email #69 (go to homestarrunner.com to see it) to show what could be going on inside his mind XD<br />
<br />
We should have get-togethers like this more often... ^^<br />
<br />
(DISCLAIMER: Cortex and Ripto belong to Universal, the Baron is property of Naughty Dog, Captain Quark is copyright Insomniac, and I managed to draw it :D)

Wow that is talented! If you wanna know who i am I am Ginkyofu13 from deviantart.com

I agree with Weasel,

OMG,they're all playin video games.Hehe!Don't think I've seen Praxis like that before!

LOL! This is so classic. XD I love the way you drew 'em! The Baron and Cortex are my faves though. Ripto. Omg...I fell in love with his game...like...wow...so many memories. X3 Good job on Quark! I've never tried to draw him before, so I give you lossa cookies.<br />
SO on my faves...where do you get such cool ideas? XD