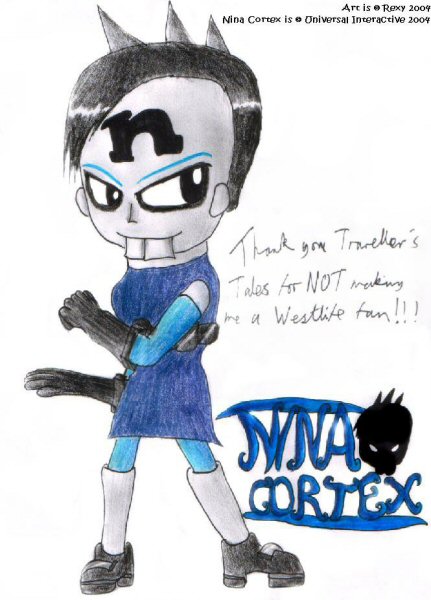 Ever since I heard the first details of "Crash Twinsanity" (or "Crash Bandicoot: Unlimited" as it's to be known in Europe... why?) I've promised myself to have a stab at drawing some of the new characters in there. Hearing about Nina Cortex and her playable appearance got me interested, leaving me searching for an image based upon her. And the wait was over when Game Informer put together their detailed article... damn, when its Jak 3/Ratchet & Clank 3 issue went for sale, everyone was talking about it! :D<br />
So here we are, Neo Cortex's "niece" (as I heard) in full detail. The details that I got from her was that she attends the School of Evil Children - may sound a bit cheesy, but the layout of her levels looked pretty damn cool. I can also see that she has a lot of qualities of her uncle - black hair, skimpy arms, the N trademark, and the black and white theme upon her body. I can admit her hands were so hard to pull off, ever since they looked all big and chunky! @_@<;br />
And in case you can't read the text it reads "Thank you Traveller's Tales for NOT making me a Westlife (Irish boy band -_-) fan!!!", which goes to show her gothic qualities. <br />
<br />
Now this leaves me wondering who were her parents anyway... o.o;<br />
<br />
(DISCLAIMER: Nina belongs to Universal - NOT Traveller's Tales as she makes an appearance in Crash Purple too... o_O*)