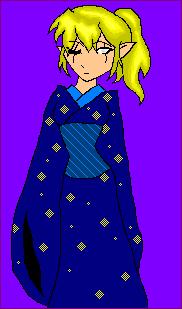 As shuka opened her eyes for the first time a devine light was cast apon her and then the sight was gone. Because of her mothers crimes agaisnt the gods, they cursed her child. The first and last daughter of Koagia, is thus, Shuka. Shuka's eyes were deemed colorless and she becameblind, scars runnign down both eyes to show her curse. The gods became fed up with Koagia continuing to cheat death. So they took Koagia's life in child birth, elaving the new born, and blind, Shuka to her death, hoping nature would finish her off. But something happened that went wrong... A Wind and a Void demon came apon the child and took her abck to their master, Lord Naraku. Since her birth 15 years ago, Shuka has served under Naraku never knowing how evil he was. And though Shuka's father was only 1/4 demon, and dog at that... Shuka was born pure wolf demon. She uses the gifts she was left wiht to aid ehr in abttle wen Naraku sends her into one. Though she cannto see people and light, she can see their aura's and can tell people apart from demosn by the aura color. Her hearing is more acute then a demon with linage connecting to the gods and she uses two daggers the size of short blades.

^^ grats with being pic of the hour!! you made this with paint right? it looks great I love the hair ^_^

cool only one comment there so should be more

This is so pretty! I love her kimono!
Great story too!