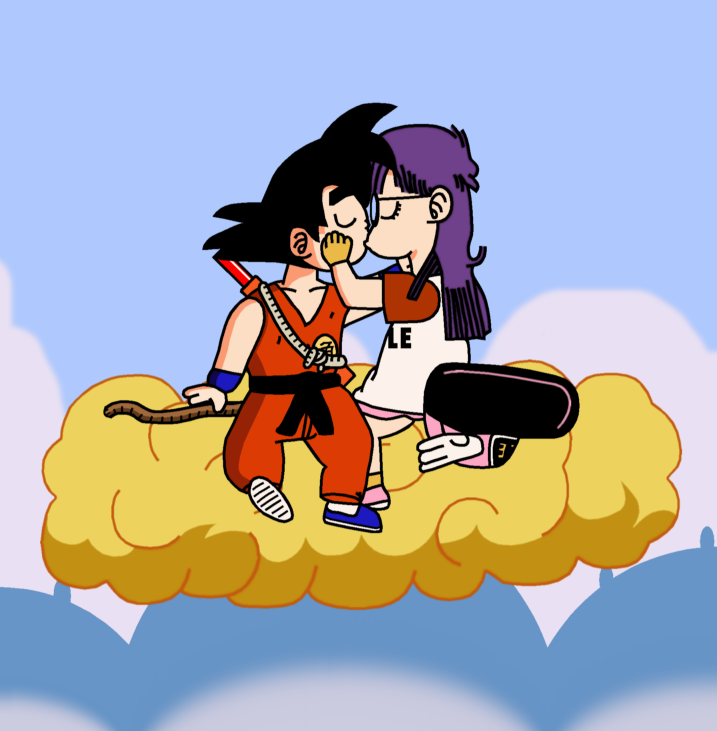 (Excerpt from Dragon Ball: From Penguin Village with Love - Tale 4)

"Hey Go-kun, where're you goin'?" the robot girl asked him one day, walking up to him as he prepped his Kinto'un.

"I'm headed back to Kame House," Goku answered her, strapping his Nyoibo onto his back. "I gotta explain why I ditched my trainin'."

"Oh." Arale made a slightly curious face, not entirely sure who or what he was talking about.

He grinned encouragingly. "Hey why don't you come with me?" he offered, looking over his shoulder at the girl. "You can get some great martial arts trainin' from the turtle guy!"

Her smile was brighter than a summer day. "That sounds cool!" she squealed enthusiastically, shaking her head "yes" rapidly.

And so they were off, amongst the clouds and winds on a brand new adventure. The seas and continents swam underneath them as Kinto'un made good time across the world, leaving nothing but a yellow/green streak in its wake. Arale gripped onto Goku's shoulders excitedly as she strove to see all there was to see in outside her own Penguin Village. The boy, for his part, just urged his cloud faster, wanting them to have as good a time as possible.

"It's so fast!" exclaimed, her hair flapping like a violet fireball behind her head. "I wanna run that fast!"

"You can!" Goku insisted, turning his head to grin at her. "Just start trainin'!"

She giggled happily, letting the wind hit her face full blast. Then a thought came to her, and she scooted closer to him. "Hey Go-kun, I think I know how to do that 'kissy kiss' stuff now!" she said with a somewhat mischievous smile.

Goku's face became confused for a moment. "Oh, that thing from last night!" he recalled, his eyes widening up with recognition. "What about...huh?"

But the girl was already leaning in, at a rate almost equal to that of Kinto'un itslef. {SMOOCH!} Before he knew it, Arale had laid a rather heavy lip lock on him, putting both hands firmly on his cheeks. It took him a moment before he was able to gather enough nerve to kiss her back, putting his hand on her shoulder to steady them both. They broke apart after a moment, both chuckling with embarrassment, even Arale.

"Wow!" Goku said, a red flush slowly flowing to his face. "That sure was different!"

"Yup!" Arale agreed, with a “heh heh heh” of laughter.

The boy turned back towards the blue skies, rubbing the back of his head nervously. "I wonder if Kame-Sen'nin knows about any of that wedding stuff?" he pondered out loud, bringing a hand to his chin and rubbing it.

Arale smiled for a moment, before rushing forward and embracing the boy. "I love you, Son Go-kun!" she cried out happily, squeezing her cheek against his back.

Goku looked behind him in astonishment, then slowly smiled. “Hoyo-yo…”

And {HYUUUUNnn…!} the Kinto'un tore down across the rushing seas, filling them both with the familiar rush of curiosity and quest.