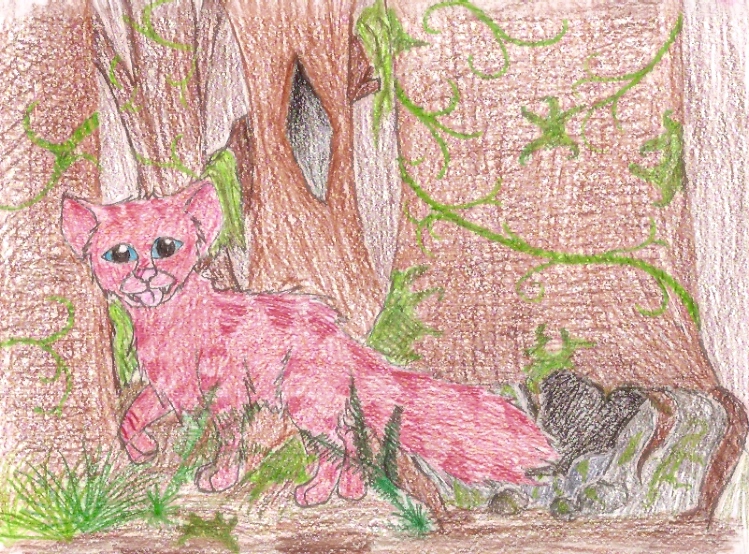 another pic with a background... something must be wrong with me.
anyway this is RedPaw an apprentice in my best friends clan, ForestClan.
she appears in the second or third part of the warrior fan fic I'm writing among other things.
she goes with the chosen ones to defeat the evil MidnightStar and his clan, NightClan.
she may be killed so don't get attached to her.
well  i wasn't going to go into her personality but i think i will.
she has a VERY bad temper. she's gone thought about 6 mentors, they just give up on her after a few days because of her stubbornness. she even began to be trained as a med cat but RainBreath the ForestClan med cat couldn't stand her so she ended up being mentored by her father DawnStar.
i think that's it...
Oh the scars on her paw are from a fight with her first mentor WhiteHeart, who also had a bad temper. the scares on her nose are from a fight with a fox... did i mention she was too brave for her own good?
one more thing i forgot she isn't one of the chosen ones, her sister BluePebble (RainBreath's apprentice) is, along with EmberStone, from MountainClan, TawnyFeather from SeaClan, FoxFire from SeaClan, (born a MeadowClan cat, moved to SeaClan when his clan was killed) and SilentStream originally a kittypet's son but now a warrior of SeaClan, he's my next pic so I'll tell you about him them.
well that's it, enjoy! (sorry that was so long)