The Green Dragon by SacredDragon 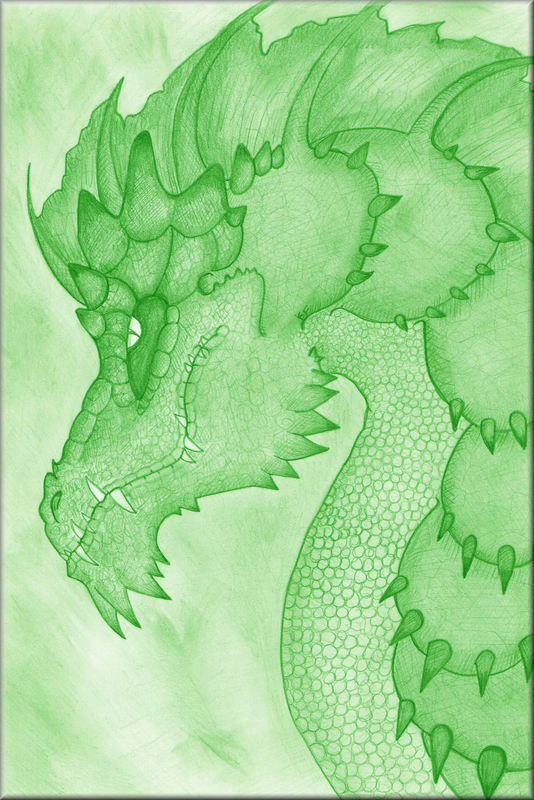 Green dragons are the third most powerful of the classic chromatic dragons. Physically, they are most notable for the large, waving crest or fin that starts at the dragon's nose and runs the entire length of the dragon's body. They also have exceptionally long, slender forked tongues. They smell like chlorine gas. Green dragons are reasonably good parents, with both mother and father typically staying close to their eggs while they are incubating. Green dragon females either keep their eggs in a solution of acid or bury them in leaves moistened with rainwater. The green wyrmling is easily mistaken for a black, due to their nearly black scales. As the wyrmling matures, its scales become steadily lighter in color until they reach the striking green shade of an adult. The wyrmlings typically stay with both parents until they reach adulthood (approximately 100 years).

Green dragons revel in combat, and will often attack for no apparent reason. They are highly territorial, and will often view any intrusion into their domain, voluntary or not, as a personal affront. They are extremely cunning and duplicitous foes, and love double-crossing others. A traveler who stumbles into a green dragon's territory may be able to bribe the dragon for safe passage, but more often than not the dragon will pretend to agree and then attack the unsuspecting offender once their guard is down.