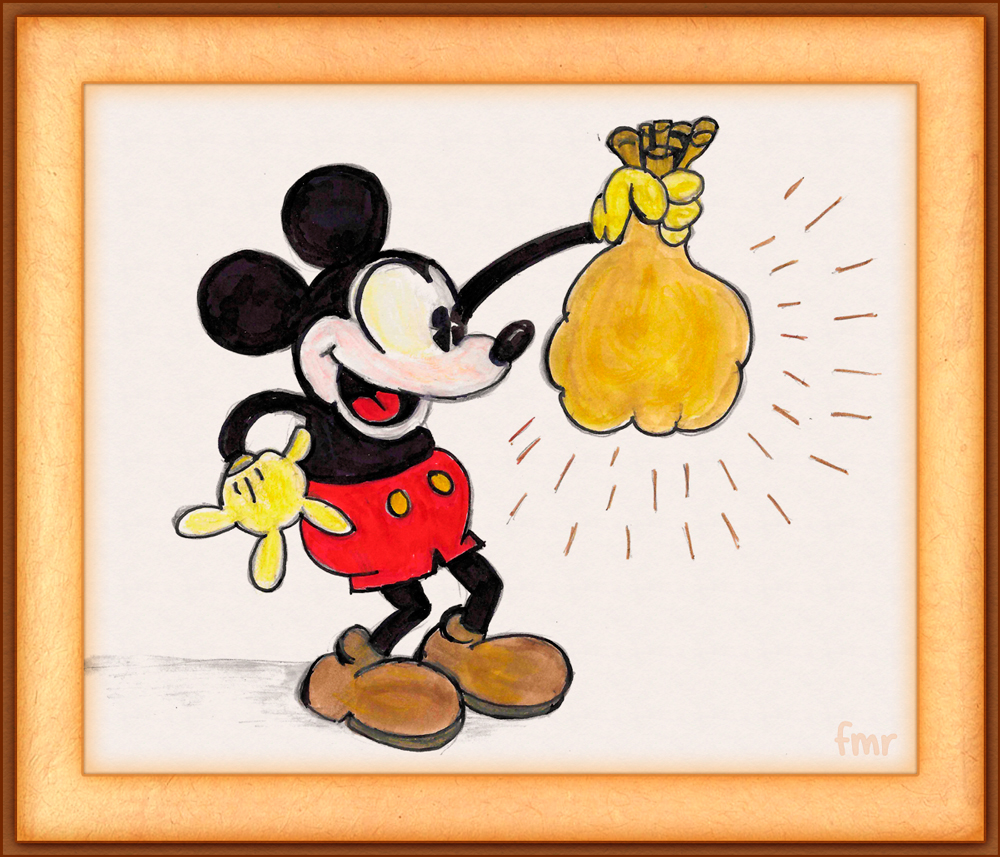 
Mickey Mouse created by Walt Disney and Ub Iwerks in 1928,
is one of the most famous and successful cartoon characters in the world.

Wonder what's inside the bag Mickey is holding... One thing for sure, it must be something really precious ! ;)

In your opinion, what do you think there might be in that bag?   ;-)

Why not, after all?
But on the other hand, if it was a gift for Minnie, he would have wrapped it in a beautiful paper, with ribbons and a rose.....

On second thought, the shine coming out from the bag may either suggest something precious (since that's how did cartoons from 1930-50s depicted such valuables), or radioactive material.

But in the latter case, it's quite weird Mickey isn't securing himself from radiation - even if his shorts, shoes and gloves have lead layer sewn beneath, the rest of his body remains dangerously exposed to gamma rays ! xD

Yes, you are right.
Iit is something precious, of great monetary value.
The underlying idea is that Mickey is a good American and therefore a Capitalist, not a lousy commie.
Walt Disney himself was a Republican, and his personal values and convictions are expressed through his art.
So don't ask why Mickey is one of the most famous and loved character in the world,
and so is his creator too!
It is not just a mere coincidence.  ;-)
I have never hear of  famous comics from north korea!  LOL

I remember Walt Disney knew the threat of communism, thus he looked after his studio to prevent those fans of Marx and Lenin ruining his business. There were stories about "animators, who had their careers ruined by Disney", which must be nothing much that mere exaggerations - if Wally hadn't sacked those communards from his studio, they'd have made at best bloody revolution with riots and casualties. At worst, if they had been KGB agents and Disney wouldn't have reacted as he did, he'd have had trouble with CIA for allowing enemy agents spread toxic propaganda.

Myself, I've never been such fan of Mickey's cartoons, though I like original series and those from 1980-1990s for promoting values of honest capitalism and free-market economy.
Heck, I'm sure most of cartoonists in the free world were more or less inspired by Disney's ideas, for example in the cartoon episode, where Mickey was to go on date with Minnie and he had to face so many obstacles, as if someone threw them intentionally beneath Mickey's legs. The same scheme was copied later:
- in at least one Bugs Bunny episode;
- in those "Tom & Jerry" episodes, where Tom was dating females and Jerry was disturbing those plans;
- there's an episode of "The Scooby-Doo Show" from 1970s , where Scooby Doo and Scooby Dum try to spend time with their female cousin Scooby Dee, while "the Ghost of Milo Booth" keeps sabotaging their plans by abducting Dee and scaring the dogs;
- the way Jon Arbuckle from Garfield comics and cartoons dates Liz (his girlfriend) looks vaguely similar to Mickey Mouse episode I've mentioned above. The same happens with Garfield dating females in comics and cartoons.


One could say, that Walt Disney invented the concept universal humour in cartoons - Chuck Jones, William Hanna, Joseph Barbera, Jim Davis and others just expanded it. ;)

Very nice job!
I am a fan Mickey Mouse!

Cool! Say it frankly, I've somehow always liked this old school version of Mickey the best among all :)

You are right.
The vintage version is rather cute!  ;-)