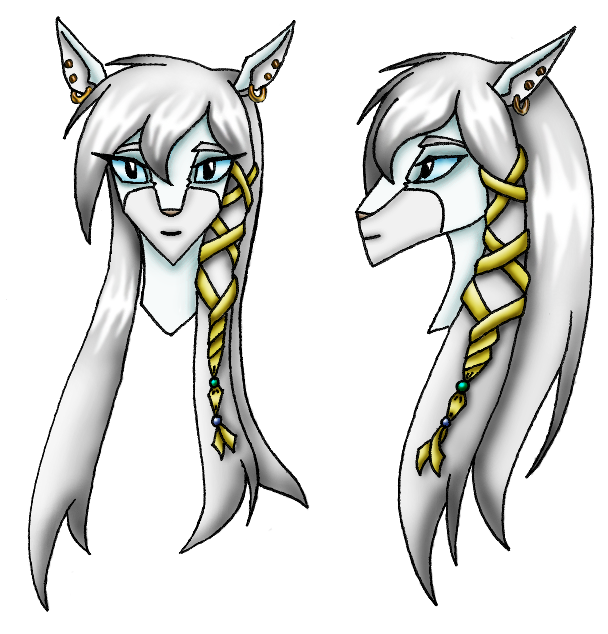 As was mentioned in my submission of my character Ibis, he has a mate. A lovely Merb named Egret. This is a head shot of the character. I''ll draw a full body image sometime in the future...hopefully. ^^;

Just for reference, Egret is not an Albino. Her eyes are Blue, so she''s Leucistic. Her background is based on the Native American legends surrounding the births of White Buffalos. The twisting Ribbon in her hair is the traditional marker of the Medicine Maker...I just made that up. ^_^

I''ll try and sketch a full scale body too later...but since we have yet to see a female Merb in the show, I''m not taking too many liberties in her initial design.
Here''s a brief Profile on her.

Personality: Egret is very calm and reserved in comparison to Ibis. She is supportive, and steadfast, and is obviously the foundation in the family.
She enjoys to entertain guests, and is very proper in etiquette.
As the Medicine Maker of her tribe, she takes alot of pride in her position. With so many who rely on her for her renowned medicines and cures, it is something she takes very seriously.

Background: When Egret was born, there was a great celebration. A white Merb child with blue eyes was a sacred sign in the tribe, and she became a symbol of her people. As the proclaimed sacred child, she was raised in the most highly respective manner.
Though she herself was a bit bored from the somewhat spoiled lifestyle, her upbringing was also strict, which kept her mostly isolated from other young Merbs her age. She never got to socialize or make friends during her early years.
As she began to mature, she was allowed to mingle more with other youths. This was mainly in preparation for the tribe''s Coming of Age traditions, where young Merbs begin their rise to adulthood and to prepare for their positions in the tribe. Egret herself was already promised a position, and was guided into the tribal art of medicine making.

Egret was courted by many young males, but one male was more determined and affectionate to her. He would fend off other males who made her uncomfortable, protecting her and he always wanted to talk to her. This made him stand out in her eyes. He didn''t court her merely because she was the Sacred One, but because he wanted to know her and be close to her. Ibis became her most beloved mate, but on the day of their nuptual conception, their tribe''s Terra was invaded. Egret and Ibis would surely have died had not the actions of a brave Sky Knight saved them from enemy fire. Ibis and Egret did what they could for the fallen knight and saved his life.
In return for saving their lives and their tribe, Ibis swore his loyalty to the Knight, promising to assist the squadron with his skills. Egret grew sad when her mate left with the Thunderbirds, but Ibis promised her that he would keep in regular contact, and visit often. This reassured her, and she promised to remain faithful and strong as she eagerly awaits his every return.


***Disclaimer***
This is only a Fan fiction Piece. I do not claim to own Storm Hawks or its characters.
Storm Hawks © Nerd Corps
Ibis, Egret &amp; Thunderbirds © Me

Very nice and well thought out bios. It gives more life to your characters. Love how you did her hair, too. ^_^