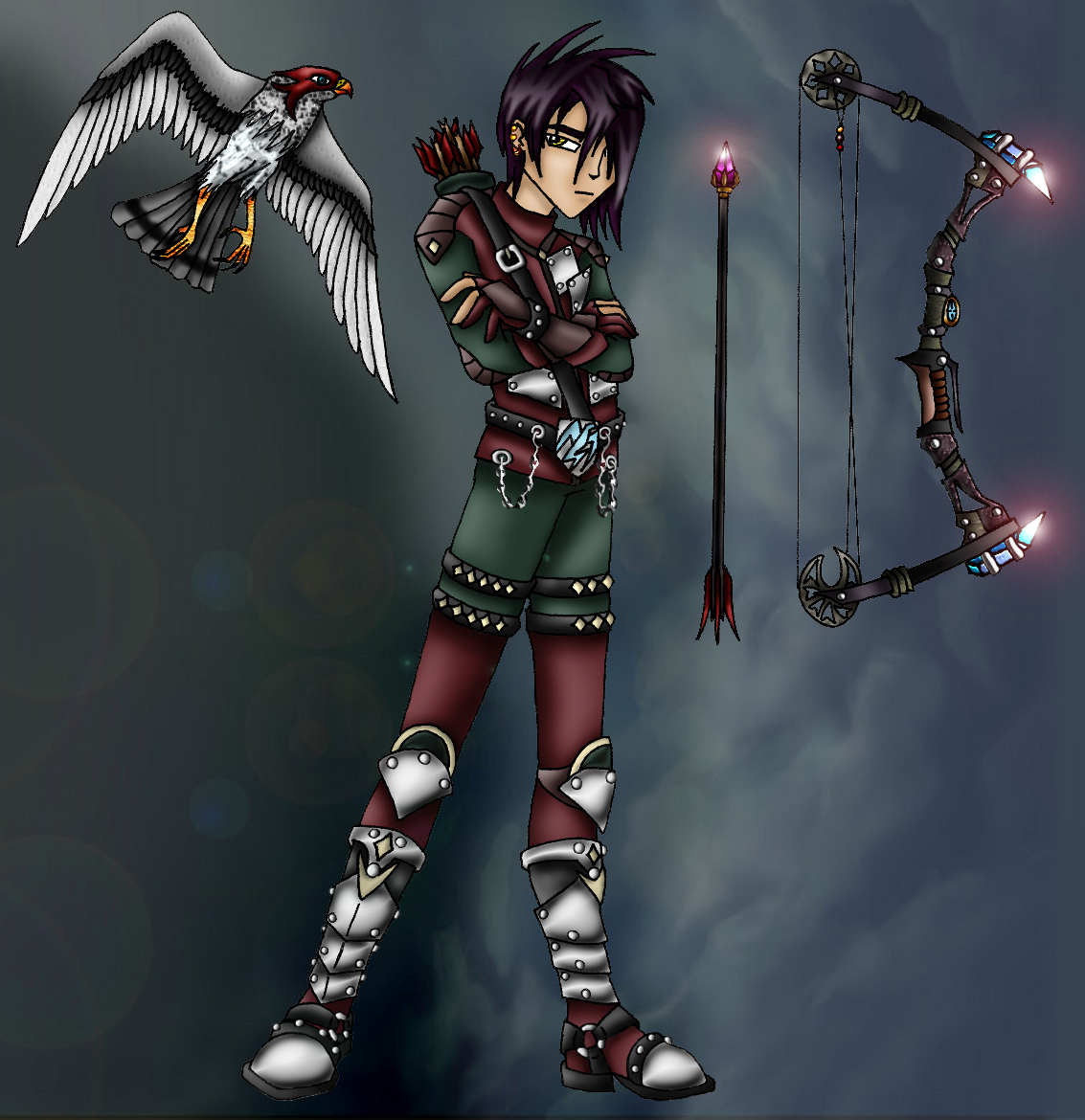 Another OC member of my Thunderbirds Squadron for Storm Hawks. This is Cain, and his Hooded Falcon, Fletch.
This is basically his profile. Not much to look at, but he is a mysterious character. I'm leaving it open to possibility, since I have too many theories about Cyclonia and its people. ^_^
Also, nothing is wrong with his left eye. He just likes his hair that way.
I also used to be into archery when I was in Middle and High School, so I at least know some things about archery.
The hardest thing to draw on this was that dang bird! I need to work on my wildlife sketches. O_o
I picked the name Cain bcause of its multiple meanings: Spearman, Possessed, Craftsman, Sorrow.
Aside from "Possessed", all these seem to relate to this character's developed persona. He may not be a "Spearman", but Archer is close enough...right?
And Fletch was named because of the "Fletchings" on arrows. Cute eh? Oh yeah, Fletch is also a Female. ^_^

Personality: Talk about an Emo, this guy makes Stork look elated. He usually likes to keep to himself, and spends a majority of his time alone in his quarters.
His interation is minimal with others, but when he does speak, he's to the point and very matter of fact.
He has a very high IQ, despite his personal setbacks, and is a skilled craftsman when it comes to building his bow.
He is also a very skilled marksman. His abilities could possibly rival or possibly surpass those of the famed Talon Ravess.

Background: Not much is known about Cain. He doesn't like to talk about his past or origins. It is known that he was born and raised in Cyclonia, and now lives in Exile.
Cain was found when the Thunderbirds just happened to pick up on his Switchblade being pursued by a group of Raptor Bounty Hunters. When he was asked why the bounty hunters were after him, he wouldn't elaborate on details other than, "Simply seems like I'm a wanted man..."
Even though the conditions seemed suspicious, Smitty offered Cain a place among the Thunderbird Ranks. He agreed to join since it seemed like the best chance of survival for the young exile.
Cain is the youngest member of the Thunderbirds.

Fletch: She is a rare hooded Falcon, who has been Cain's constant companion and hunting partner. Her species are known to be one of the fastest natural fliers in Atmos, and she has no trouble keeping up with skimmers.
Though due to the heavy enviromental damage to their native home range in Cyclonia, caused by the industrial swelters and boilers of the empire, the species is near extinction.
Fletch is fiercly loyal in her bond to Cain. She isn't too partial with strangers and rarely even civil with others she is familiar with. Fletch will defend Cain with her life if he is threatened. Cain would probably prefer to protect her though in such a situation.

Compound Energy Bow:
Like Ravess, Cain uses crystal energy to give his arrows greater velocity, however, unlike Ravess, Cain has two crystals mounted on the tips of the bow's limbs. When the crystals are activated, this not only directs the charge directly into the released arrow, but improves his aim and sight at the energy epicenter.

The design is that of a parallel-limb mid axle length bow. This design was preferred because parallel-limb bows generate little to no forward limb thrust and offer the smoothest release of any bow. The limbs are solid, with single cam pulley system, and has a magnifying sight mounted for more accurate sniping.
Though considering this bow is based in a fantasy/sci-fi setting, I'm not going to try and estimate its Draw, Force, and Let-off. That would get WAY too complicated.

Just a quick note on that Arrow. That's Cain's Oblivion Arrow. Yes, that is an Oblivion Crystal Arrow tip. Its the only arrow in his arsenal with a black steel shaft. He has only the one and he says he's saving it for only one certain encounter. Wonder what that could mean...?

***Disclaimer***
This is only a Fan fiction Piece. I do not claim to own Storm Hawks or its characters.
Storm Hawks & Background © Nerd Corps
Thunderbirds, Cain & Fletch © Me