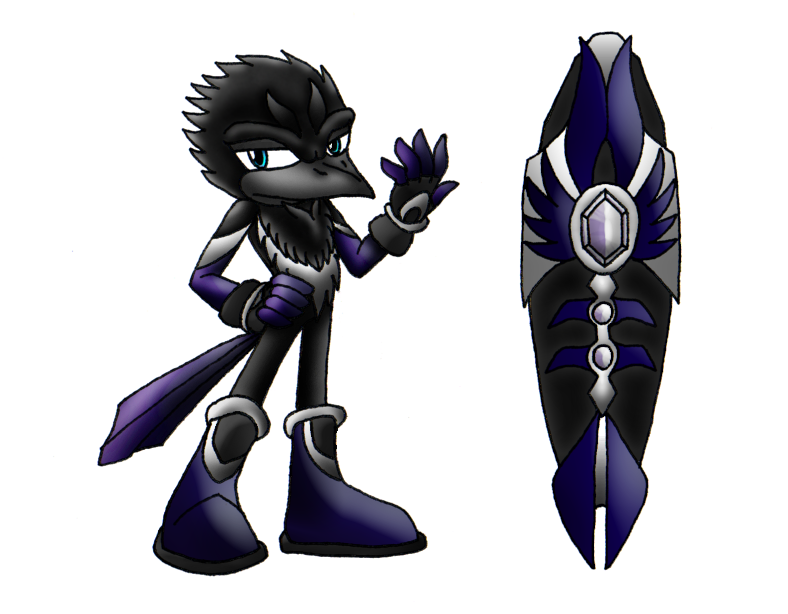 This is a fan Character based on the Sonic Riders/Babylon Rouges, and is being developed for a role in an upcoming Babylon Rouges Fan Fiction I'm putting together.
I chose the Magpie, because where I come from, these birds, though very beautiful indeed, are notorious thieves! O_o
I've seen one make off with a 5 pound steak...in flight! That was a sad barbeque day...but pretty cool at the same time! These birds also love the shineys! So watch out if you wear flashy jewelry around these birds. They might just rob you blind! XD

Extreme Gear (Zero Gravity) The Swift Corsair - His skills on a board are legendary. His board also has a built in voice command module that allows the Swift Corsair to undertake certain commands from Magnus.

"Corsair" - Summons the board if Magnus is separated from it.
"Shield" - The board flies in front of Magnus and acts as a shield.
"Charge" - The board will jump into top speed for a short distance. Usually makes for an effectively fast escape, or can easily clear a path through anything...or anyone blocking Magnus' path.

The Swift Corsair hosts a central computer core, similar to the one that Wave wears around her neck, that allows for the voice command programming tech in this particular gear.

Blackbird Rush - A Stealth skill Magnus uses as an evasion tactic, and at times a tactic for catching his foes off guard. It will appear as though Magnus is surrounded by a massive flock of smaller black birds that will fly right at you. Before it looks like the birds are about to collide with you, the flock turns out to be only a bunch of black feathers.

Steel Staff - As in the tradition of the Babylong Rouges, Magnus does carry a weapon to knock others from their boards, or to just engage his enemies if he gets cornered. Its a collapsable/extendable steel bo staff.

Home: He is generally Nomadic, but he claims his loyalty to the Hanging Gardens of Babylon.

Personality: Magnus is steadfast, proud, level headed and always keeps an air of cool calm no matter the situation. He has a constant calculating look in his eye, and he always seems to have a plan for every situation. When he sets his sights on a goal or prize to steal, he always gets what he wants, however, he does not believe any treasure is worth more than your life.
He lives his life by a code of Honorable Thieves that he upholds to the highest degree. No other thief dares to question or violate this code, fearing Master Magnus' strict and swift discipline.
He is a strict teacher for the young heir, and demands that his student always sees to the ways of the Honorable Thief and Babylonian Society.

Fears and Flaws: His greatest flaw is his pride. He is a proud Babylonian down to the core and he will defend the honor of his home and name is anyone would dare to raise doubt of his integrity and his Code of Honor.
His greatest fear is dishonoring the spirits of the past, and failing his service to the Heir of Babylon. He wants the Hanging Gardens of Babylon to be restored to its original glory, but even he knows that the fate of the Gardens is in the hands of the destined Heir.

Background: Before the fall of the Gardens, Magnus' ancestor was once the Master Thief in service to the Old King of the Hanging Gardens of Babylon, charged with teaching the King's heir in all his trades and skills to prepare the young Heir for a future as King.
On the fated day when the Heir of Babylon and his people were scattered to the great winds, the ancestor swore to the dying King to seek out the Heir of Babylon and to ensure the youth would ascend to restore and rebuild the Hanging Gardens of Babylon to her original pristine state and glory, and would further advise the prince to govern as a great King for the future.
Since the fall of their homeland, the descendants of this ancestor have passed down the charged duty to search for the foretold missing Heir who was said to carry with him the Key to restoring the Hanging Gardens of Babylon. Master Magnus, as the most recent descendant, has undertaken the inherited mission to seek out and mentor the Heir of Babylon. He has had many adventures, and followed many leads to seek out his charge, but the Heir always seemed to be one step ahead, and just beyond his reach...until the fateful day destiny intervened…

cool nice outfit eyes and board^^

Thanks, even though there realy is no relation the "Bad Bird" character. Thanks for commenting. :D

Of the actual Babylon Gardens, or o the one in the Sonic Riders games? ^_^

i realy like the way you color
that's great