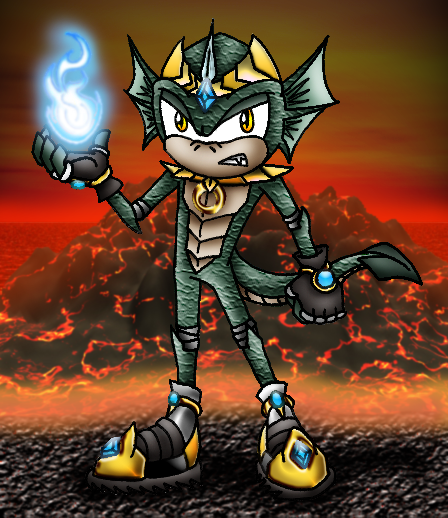 This is Imugi. An Imugi is a Korean version of a serpent or Psudo-dragon that aspires to become a dragon by growing its horns after 5000 years...or something like that.
He's a rival and part-time nemesis to Stealth and her friends. He's like the Shadow of Stealth's life, I guess only...he's not an Emo Gangsta! XD

Name: Imugi
Species: Imugi (Psudo-Dragon)
Gender: Male
Eyes: Gold Fire
Color: Grey Green
Height: 110 cm ( 3’7” )
Weight: 41 kg (90 lbs)
Age: Ageless (But appears about 17)
Likes: Hot, Dry climates, furthering his ambition to evolve.
Dislikes: Extreme cold, anyone and anything that hinders his efforts or gets in his way. He also has issues on the subject of his Father
Skills:
Psionic Power (This is his primary ability that allows him; Levitation, Psionic shields, some minor telepathy, and his personal favorite Psy-fire which can be used as either a projectile attack, or an attack on one’s mind giving them what he calls “Brain Burn” that incapacitates an enemy. Silver would seriously hate this guy. )
Dragon’s Breath (Speaks for itself. He can breathe intense flames like a flamethrower.)
Raptor Rush (Like a Velociraptor, or cheetah, he is able to pull off a short burst of extreme speed, but must rest soon after)
Fire Storm (His most powerful attack, where he combines his Dragon’s Breath with his Psy-fire to incinerate a large area.)

Personality: Strictly a loner, but will consider a brief alliance only if he should benefit in power. He’s quick tempered, arrogant and very proud.

Fears and Flaws: His hair trigger temper is his greatest flaw. Too often he loses his cool and drops his guard as he charges into an all out offensive rage when he is riled up. He can easily lose sight of his prime goal if his temper gets the best of him.
His secret fear is never being able to return to his Clan and to win back his birthright. He desires to be accepted in his family as a full fledged dragon.
He never talks about his fears, mainly because he believes in never showing any signs of weakness.

Background: Imugi was the first born son to a Grand Dragon Clan atop the Mystic Mountain. During that time, his name was not Imugi, but Razorfang, a fine name for a Dragon Prince. Though his parents were troubled that their son had no wings, he made up for his loss with the blessing of great psionic powers. With training and practice, the prince gained many powerful abilities his siblings did not have, further ensuring his birthright as the Heir to his Clan. However, his life changed when his horns did not grow in by his Coming of Age ceremony on his 16th birthday. It was a great tragedy for his parents and a great disappointment for his Father, the lord of the Clan. The young heir was then stripped of his name and birthright and cast from the mountain, exiled to the world below to wander as an Imugi until the day he evolves to grow his horns and become a dragon.
Imugi believes that if he finds a means of accumulating great power, he can achive this evolution and return home. His travels brought him to Angel Island where he discovered the Master Emerald, and challenged the Guardian for possession of the Item of Power. Despite his abilities, Imugi was defeated by the Guardian and driven into the Lava Reef where he now resides.