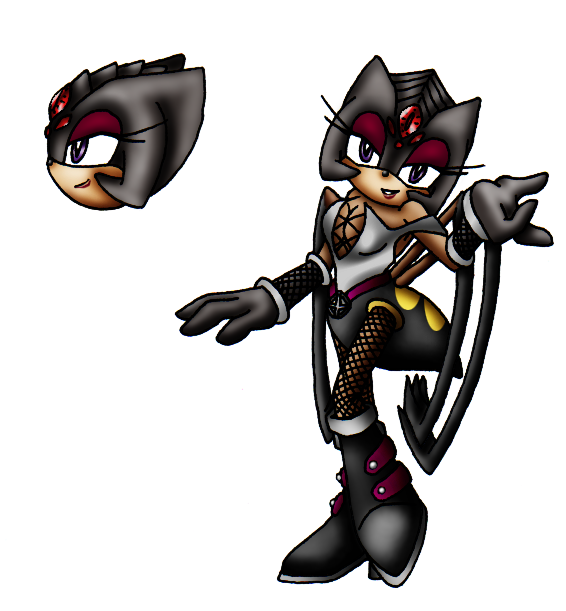 Another new character for the development of my Sonic Rider's comic project. She's got some ties to my other character Master Magnus.
Yeah, she's got the Rouge body type, but hell, I guess it was bound to happen. Heh, most other females I draw are fit an proportionate. May as well have a super busty one, right? XD
Would you design a spider any differently?
She is also designed to fit the real life biological profile of an Orb Weaver Spider, including the three fingers/claws on her hands and spider legs. Here, there goes my science geek knowledge again. XD

Skills:
Like Rouge, Rose knows she has a body, and knows how to use it. She will seduce and lure males nearer to her to either end up getting ensnared in her web or caught in the gaze of her "Eye".

Web Spinner - She builds a various array of webs to catch and ensnare her prey and objectives. She works fast, and can have a web completed in a matter of minutes to seconds, depending on the size. Also doubles as a handy wrapping ability for her captured "prey".

Jeweled "Eye" - She has a few gems implanted in her forehead, and her most prized is the large gem called the "Eye". It is a hypnotic spell casting gem that will hypnotize any who looks into its illumination. Makes her job of catching and wrapping up her "Packages" for delivery or just restraining her "catch of the day" much easier.

Ecstasy Venom - She does have venomous bite with a unique cocktail that has similar effects to the drug Ecstasy. It won't kill the bitten, but will leave them in a daze of Delirium, and Euphoria.

Marital Status: She has a Steady Relationship with a curious Hedgehog named Dash, but she aslo has a Lust affair with Master Magnus, her "untouchable" comrade(She can never catch him ).

Home: She is nomadic, occasionally building a web in a dark crevice to act as a place to sleep, rest and catch something to either eat or play with.

Personality: She is fairly light hearted and flirty, and has an unsettling habit of leaving most people feeling uneasy with her compliments referring to "Food", "Taste", and "Flavor".
As a Hunter for Hire, she takes on Catch and Deliver jobs
for anyone who is willing to pay her price. Very few have looked elsewhere, for Rose has maintained a 100% retrieval rate in her career, making her one of the best, and she is quite proud of her reputation.
Though Rose enjoys her job, she has very specific guidelines that determines whether or not she will accept a job. She will take no job that requires her to kidnap or harm children. Anyone who tries to hire Rose for such a job may be at risk of her turning on them.
In all honesty, she hates killing and death. She will only do so as a last resort, or to save herself from harm or starvation.
She's also a bit of a nympho...males, beware of getting stuck in her web when she's "in the mood"... >_>

Fears and Flaws: She can be easily distracted by sweet talk. One of the few saving graces that several handsome and cute young males have used to gain a chance at escaping from her web.

Background: Rose has lived on her own since a very young age. As a young child, she found it hard to fit in with regular society. Not too many places or people found good company with spiders and tended to avoid her. She spent most of her youth alone, trying to find her place and calling. She started working as a Hunter for Hire when she turned 14 and found that she was good at it and she enjoyed her work.
Though she found herself happy and well paid, Rose still lived alone, and her lonliness would lead to times of depression. Soon she started catching unwary wanderers in her webs. When she would find a good looking young man that suited her tastes, she began to opt to keeping them and having her way with them for a time...even against their will.
After a time, and at their consistent begging and pleading, Rose would release her captive companions and return to her own wandering and work.
When Rose was 19, she encountered a Master Thief in her web. He was different from her normal catch. This one was older, stronger, feathered, and he had an alluring look in his eye that drew her attention. She wanted to keep this one for sure, but before she could even draw out her web wrapping, the dark stranger began talking to her. Instead of begging and pleading, the thief admitted he was looking to steal a hypnotic gem he had heard of, but when he saw the "Eye" was firmly implanted in the spider's forehead, he claimed that he wouldn't want to blemish her lovely face by taking it from her.
His flattery was something new to Rose. None of her previous catches ever talked to her like that...or for that matter, ever talked to her aside from begging and pleading for her to release them. This intrigued her, and she asked the handsome bird to tell her more. He was more than happy to continue with his flattery and sweet talking. Rose soon found herself giggling and blushing like a young girl, unaware that the thief had managed to cut and work himself free of her web, and quickly made his own escape on a flying board. Rose was shocked that one had actually escaped under his own will and power. Before he left, the thief bowed before her and introduced himself as Master Magnus before flying away. The one that got away, Rose deemed him, and she has pursued him with strong lustful determination to catch this Master Thief, and keep him as her own.
For the next couple of years, Rose and Magnus maintained this "Rob you/Catch Me" off and on again relationship of lust. Unfortunately for Rose, she still has yet to capture her prized "Untouchable", though they have remained close comrades over the years, and have allied together through several adventures and jobs when their work and paths cross.
Recently, Rose encountered and lured a curious young hedgehog named Dash into her web. Again, to her surprise, this one didn't beg and plead, but talked to her. At first, Rose thought it was just false flattery to distract her, but as it turns out, the young boy liked spiders and was willing to let her do as she pleased. Dash wanted to stay with her, and said he loved her. Rose found this very awkward, since she had never been told that anyone loved her. She agreed to carry on a steady relationship with Dash, looking to get to know him better before fully committing herself to "Love". At the same time...she doesn’t want to give up the chase for her "Untouchable" desire.

a spider OC? genius. i never would have thought of that! i love the way you gave her her extra legs without making her look awkward. she has a great Bio too. not just gibbery nonsense that other people have XD

Thanks! Wait till you see all her legs in action! :D

Heh, thanks! But just so you know, Rose isn't a Widow spider. She's an Orb Weaver Spider. ^_^

Heh, only if they want to buy my character designs. ^_^

A spider fan character is a pretty good idea, very orignal, i'm not a big fan of spiders but she is very pretty. you sure know how to create cool OC's

I like her except for the fact shes a spider!! *twitch and die!*

Rose: Hello, my darling little dish. Would you like to come into my web for a spell? ^_^

Rose: Are you sure? You are not answering??
Me: I am dead. A corpse cannot talk

lol its still a wonderful pic!