A Bird in the Hand...? by SaturnGrl 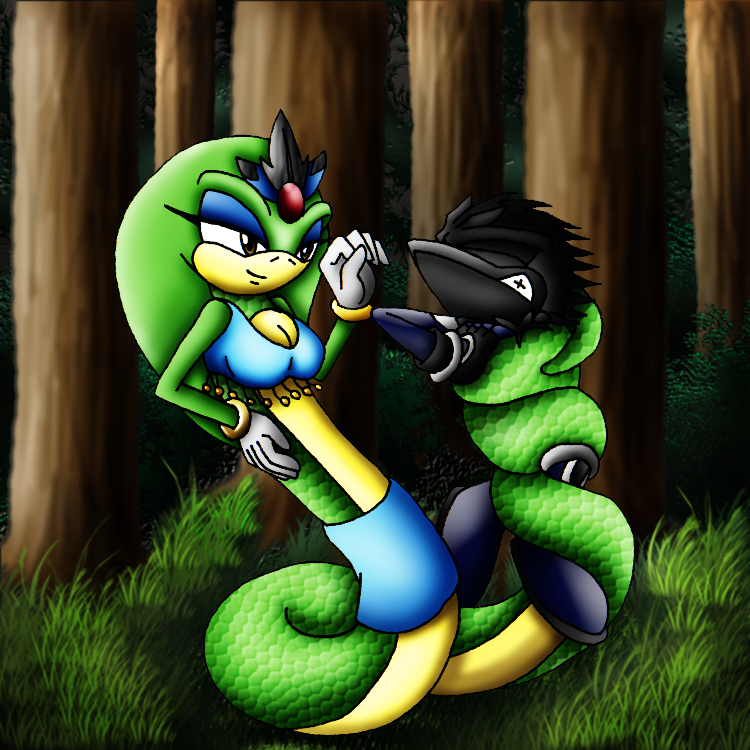 ...is worth a Snake in the Bush?! O.o
This was inspired by a little RP between Furgemancs and I where my character Master Magnus got to "meet" her character Cancun.

Magnus continued on his path until he came to a dead end of thick brush that even he couldn't enter.

"Blast it..." He grumbled. "There must be a way through..." Magnus set his board down and pulled out his steel bo staff. He took a strong swing at the thick brush, tearing some of it away. Nearby, hidden in the bushes, Cancun spied on the stranger in her territory.

"Who isssssssssssssss thisssssssssssss?" Cancun wondered. "Heh...fressssssssh meat..." She then hid, stalking closer to her unwary prey.

Magnus had managed to clear away most of the obstructing debris. He took a moment to rest and wipe his brow.

"I wasn't expecting to do such labor on my hunt," Magnus sighed. He then noticed that the woods had become eerily quiet, and this put him on edge. A soft rustle made him turn and aim his staff in a defensive stance.

"Who goes there?!" Magnus demanded. He could hear a soft giggle then something rushed from the brush and wrapped around his body, squeezing him. Magnus was completely caught off guard and the sudden powerful grip that now embraced his body forced him to drop his staff.

"Hm... what a curiousssssssssss creature," Cancun appeared from the bushes, gazing at Magnus with a soft smile.

"Le-let me...go!" The Magpie gagged at his captor. Magnus tried to struggle, but the coils firmly wound around his chest and down to his knees. Desperatly, Magnus tried to pry the coil from his chest as it squeezed the breath out of him.

"Oh, and why?" Cancun smiled and caressed his beak. "You're now my captured ssssssssstuff. Now I will take you to share with my friend."

"Husssssssssss...later you'll see," Winked the serpent. With her captive securely gripped in her coils, she moved back to the glen where she lived with Rose the Weaver.

And what will become of our Handsome Hero? I'll leave it up to your imaginations.
Based on the reputations of his female captors...Is probably gonna get "Sticky". XD

it's funny and cute

oh dang. magnus is in trouble.... XD nice job, i like their expressions ^^

Heh, thanks!
Question is...just what KIND of trouble is he in exactly? :D

Oh! Thank you! Heh, you didn't notice the scales before, eh?