Boys of the 442nd by SeanHalnais 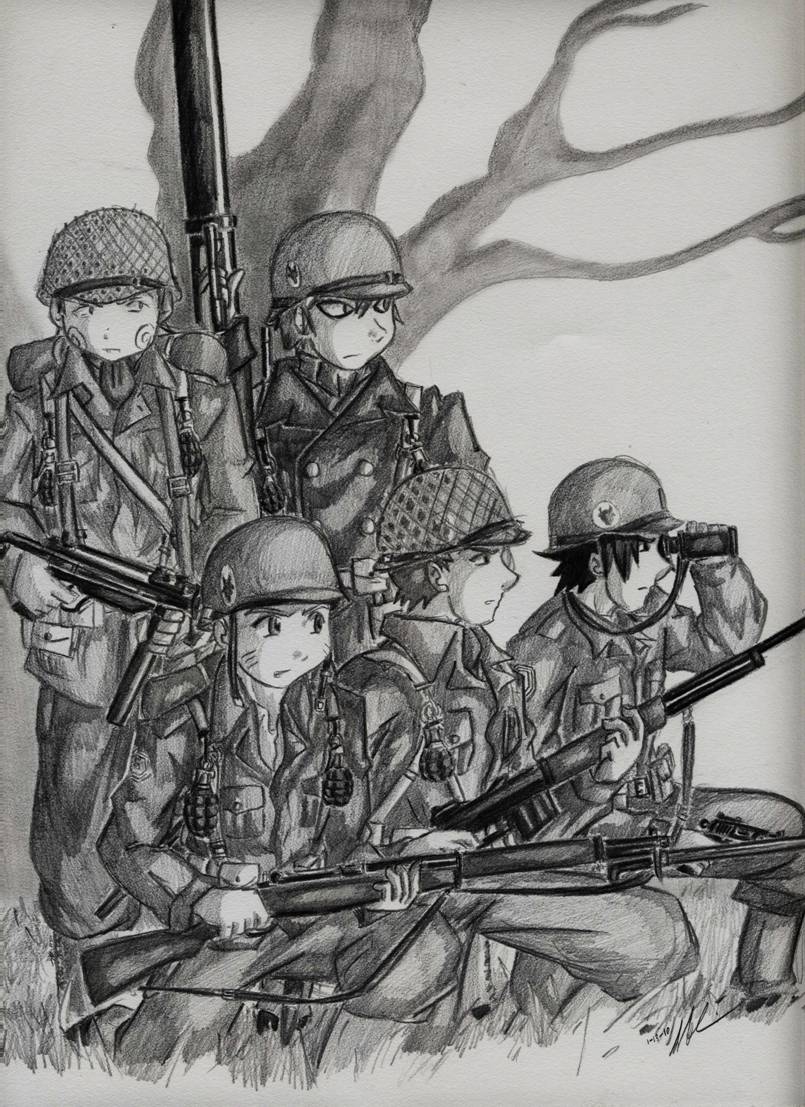 PLEASE READ NOTICE AND DESCRIPTION:
To the Viewer,
While displayed at the Winter SacAnime this year, I encountered a gentleman who has been familiar and fond of my work for some time. He asked me to do a commission of the Naruto boys as members of the 442nd, which was a unit of Japanese American soldiers who participated in the European campaigns of the Second World War. From his description, he wanted Naruto armed with a Garand and fixed bayonet, Choji armed with an M3 Grease Gun, Shikamaru armed with a Browning Automatic Rifle (BAR) with fixed bayonet, and Gaara with a bazooka. I did thorough research on how the soldiers looked and tried to get the uniforms as historically accurate as I possibly could. I think it turned out pretty well. However, there were a few snags I ran into while drawing this picture. First, the BAR bayonet was not in great demand and was rarely used. However, though I added that little detail, the scanner could not fit the entire picture. Second, just to enlighten the critics and Naruto fans, Shikamaru’s hair is tucked in his helmet, which is why you don’t see his distinguished hair style. And finally, though it was not a suggested feature on the side of the one who requested it, I also added Sasuke. He’s armed with a browning pistol and binoculars.
Just to let you know, that it took a great deal of time and effort on my part to create this picture. Therefore, I ask that you refrain from making any critical remarks. I also did this as a request and am in no way trying to insult the history of 442nd and the brave men who fought and died in its ranks. I find that perhaps this new generation can learn something of the unit’s history by seeing familiar characters in it. Thus, I beg you not to make any disgraceful or inappropriate remarks on this piece, the person who requested it, or on the artist. I do apologize for any insult or inaccuracy that this picture might have caused. Gramercy…
Most Sincere Apologies,
LordCavendish

Wanna play a forum based RPG Naruto game? Then join Naruto Sagas, where you can join a village, roll for a bloodline, learn jutsu and compete against other ninjas!. Just register at:freeto(Dot)b1(Dot)jcink(Dot)com

I think this is AMAZING~! The shading and detail to the clothing is once more top notch and astonishing. The rifles and weapons are also very well done too. I think you made this person VERY happy doing this. I should know, I still treasure the Xaliirekur picture you drew for me n_n

And no one better mock this picture I will send Vanitas after their sorry hydes! Have respect for the men who took up arms ppls! >=O

It's a fantastic drawing & I think that all your hard work you did on this was well worth it.
It's brilliant.

great pic i think you did awesome on the proportions and the shading, I'm not to great at history or the armed forces, but it looks really good too me!

this is good
love the details in those weapons and uniforms.