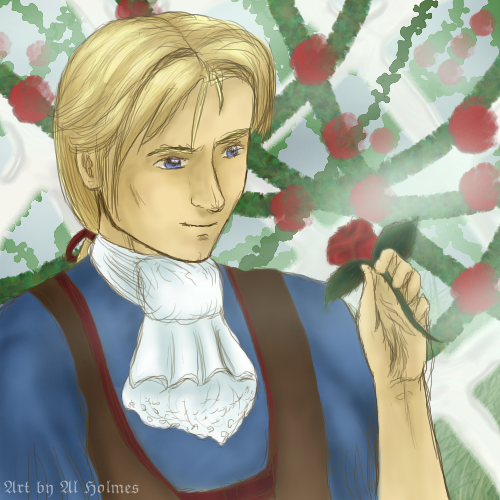 ...FEBRUARY 6TH, 2009...
Because of sketching up drafts, and tracing lineart, for art trades, and requests; I haven't been able to do any SC fanart... so earlier this night, before midnight; I drew up this artwork, of Raphael's Rose Garden.

I didn't know at first what to draw, since I have a few ideas for the Sorels... plus, my mind felt a little blank; but eventually, I decided on drawing Raphael's SCII 3P outfit, which is really cute, and looks rather school teacher-like.

...or the "Mr. Darcy" outfit, as Mom dubbed it, the first time Mom saw Raphael (who was wearing this particular outfit) versus Mitsurugi (who got dubbed, "the bad guys from Aladdin", LOL ).

...and after I was almost through with colouring, the image of a backyard fancy white fence, with rose vines come to my mind; thus, I attempted such as a background.

...oh, and I know I didn't get the outfit right - unfortunately, my brother, Hwang, doesn't have alot of good pictures of this outfit of Raphael's; and we can't play SCII right now... although, we did find a free XBox, so we're thinking of getting SCII for that instead (since we can't play the GameCube... older brother won't let us... *sigh*)...

Aladdin, at least, the cartoon is copyright Disney... bleh.