Yoshi-san, where are we going?

Yoshi-san, where are we going? 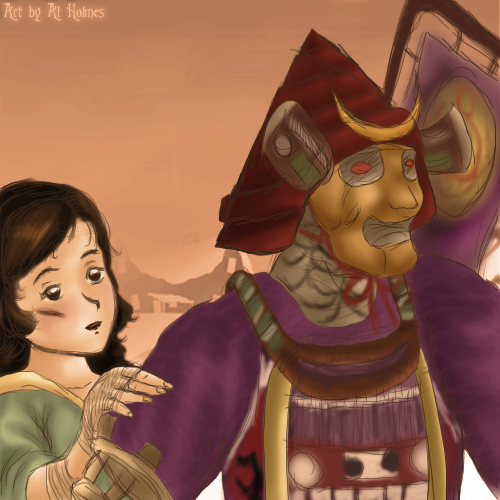 Anyways, this is Sha-mitsu tugging on Yoshimitsu, whom is her sensei, and the leader of the Manji clan - Yoshimitsu is, however, on the outlook for somebody... or something... and wants to move along quickly, without worrying the young girl.

They're supposed to be in a snow valley, at sunset... perhaps sunrise, but I haven't particularly decided on that yet.

Sha-mitsu is my original character, whom, I guess, you can say is a side-off character of Sha Agate, from the Magicus Quest graphic novel series, by my art group, ~CTM-Studios... she's apart of the Manji clan, since Yoshimitsu is awesome; and I look up to him as one of my heroes! No, honestly, I do!

...I also changed Sha-mitsu's hairstyle a little in this, too; since I realised that the last three brunettes I uploaded in my gallery all had short hair, lol.

Yoshimitsu's outfit is not correct, I know, but I don't have proper references to use... and I drew this up quickly the other night, colouring parts of it; then finished it the following day. ^_^

In Soul Calibur, and in Tekken; so, there are two incarnations of Yoshimitsu. :D