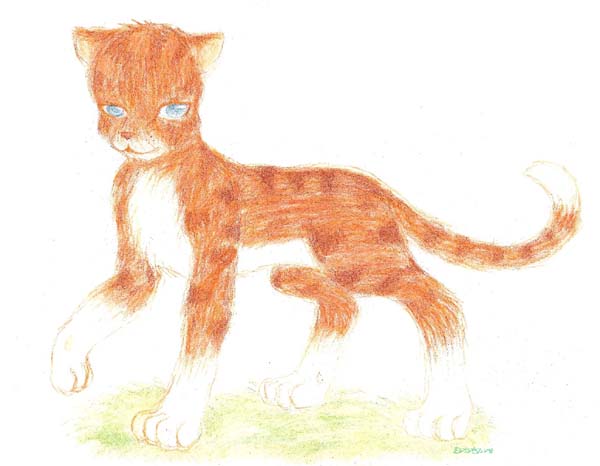 :3>
My 'Warriors' OC TigerSnow (TigerKit --> TigerPaw ---> TigerSnow) ^_^
I did this with my Pastel Chalk pencils x3 it took awhile and my scanner hates me, so I'm sad T^T Its looks 10x 'imes better in real life, trust me x'3
About TigerSnow:
Well, he's obviously one of BrambleClaw's decedants (therefore is related to TigerClaw/TigerStar). He's not evil so dont worry lol ^_^ He's best friends with my other two ThunderClan OCs, SunHeart (my main character) and RaccoonFlight. His mother decided to name him 'Tiger' because she was proud of the fact that she was so bold to name a kit that after the TigerStar epidemic and stuff :3
His father and mother hope that TigerSnow and his brother, SaberClaw, will live better lives then TigerStar and HawkFrost ever did.
Stats:
TigerSnow - a dark brown tabby tomcat with darker stripes, ice-blue eyes and distinctively large white paws.
-Age: 9 1/2 moons
-Parents: TawnyClaw & DawnCloud
-Sibling(s): SaberClaw (younger brother)
-Mentor: OwlFlight
-Best Fighting Move: anything that requires big, heavy paws :3
-Personality: Silent but friendly, Good at concentraiting and un-easily distracted, Better at Fighting then at Hunting
*Named 'TigerSnow' because he looks like a tiger that laid down in some snow and got it stuck on his fur lol xD
^_^

*gasp* thats what my cat looked like 4 years ago!

And also nice profile of him :P