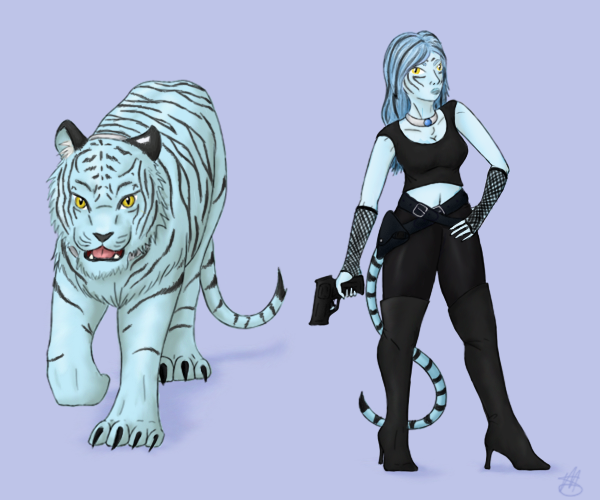 2/6 for Kristina's commission. This is Byakko, a kind of lightning/electricity deity. I dunno, I may end up adding some lightning effects in the background, depends on how much time I have over the next few days.

I'm very pleased with the tiger, seeing as I very rarely draw felines, and she turned out very well. The human less so, she's just seemed awkward to me from the beginning, but I've spent so much time trying to fix her and it just... hasn't been happening. The lineart for this pic got a little messed up in the process of messing with her though, which is even more disappointing. Still, it's come out well enough, and the black clothes Byakko wears kind of hide some of her flaws. xD And I like how her hair ended up turned out.

I found a few pictures on Google to use as references for the tiger, kind of mixed traits from all three so... I dunno. I don't feel like posting links. xP

very cool, the tiger looks awesome and hey the human form looks fine to me. U did a wonderful job