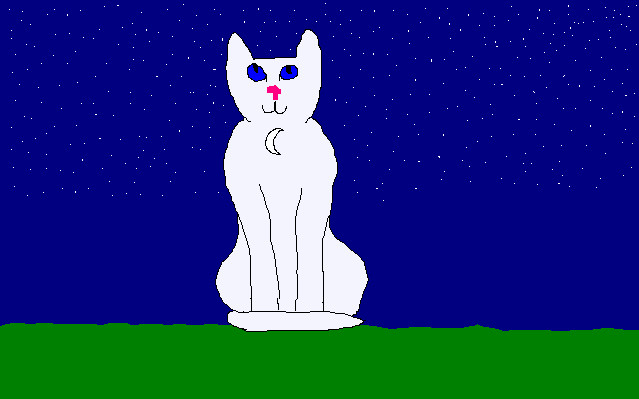 This is a picture of my OC, Moonlight. He's part of my fan fic: The Forces of the Sky. Here's his life story.

Moonlight's Clan is ThunderClan. He lived in ThunderClan with his brother, Falconwing, his father, Snowwhisker, his mother, Fernpelt, and his uncle, Scarface. He was newly made apprentice and his brother was an apprentice. One day, there was a ShadowClan attack. Moonlight's parents and uncle instructed Falconwing and him to stay in the apprentice's den. But, they went to go help. When they came to the battle ground, their parents were found dead. Over their bodies, he caught a glimpse of a cat who laughed evilly, but he never made out the features. So, he never knew who it was (Until my fan fic). After that, Falconwing was made a warrior, but Falconwing ran away to become a loner. Moonlight was made a warrior and Scarface was his guardian from that point on. In my fan fic, he got his name from the moon shaped emblem on his chest. He found out, in my fan fic, that he has 3 cousins, Sunlight and Starlight and Smalltail. Starlight has a star shaped emblem on her chest and Sunlight has a sun shaped one in his chest. Smalltail is Starlight's sister. They are the part of the prophecy of StarClan. Here he is. Also, Moonlight's enemy and the bad guy is Badgerclaw.