Alil too much off the top

Home » SweetxinsanityxSarah » Pictures » Alil too much off the top

Alil too much off the top

Alil too much off the top by SweetxinsanityxSarah 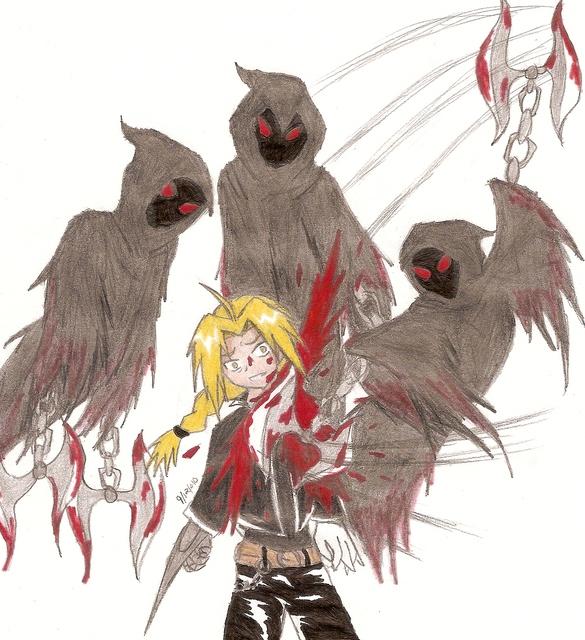 Trust me, Ed's going to have one HELL of a time in my fic "To Challenge the Night" along with a few other main characters. And violence is going to be the least of his worries. (Yay immortality! xD) But yeah; Ed gets his neck snapped repeatedly in one chapter, gets his left arm hacked off, even has his spine ripped out at one point! But thanks to being an oh soo awsome immortal vamp, like with homunculii he rapidly heals up after the act is carried out. However he cant keep it up forever cause after awhile, if he bleeds out too much he'll need to feed to energize himself to help keep up his healing. If he cant feed and has lost too much blood, he'll simply slip into acoma til blood is givin to him.

Now in this scene, Edward has come across one of my favorite Castlevania critters known as The Vassago. These are spirits that can be very ruthless in a pack of either their kindred spirits, or in a mixed group of other demons and monsters etc. However they have a habit of sometimes zooming off when alone, or floating out of one's reach til they ready a nasty suprise attack which is spinning like a top. Trust me if Castlevania was more violent, I think they wouldnt hesitate to make this a move to avoid greatly if you were low on health otherwise; off goes your head. xD
Edo is learning the hard way what happens when you dont watch every opponent on the battle field you are fighting against. His dry cleaning bill's going to be a biatch to pay kekekeke.

But yes, reason why Ed has encountered these beings is cause he and the gang have inflitrated the master's castle and he's currently roaming the Anti-soul mysteries lab and has just been introduced to the royal advisor's special attack force which of are course as you can see; the Vassagos. Why them you ask? Well the royal advisor is also a mad scientist of sorts and it is said that Vassagos are evil spirits summoned by those seeking knowledge. So it makes perfect sense that a wicked scientist would want these things at his disposal along with a few chimeras and lets not forget mutated flesh hungry zombies.

But anyways; YAY VIOLENCE! Oh and view plus dont be shy to comment~ I wont bite promise =3 (I'll give ya a chibi vassago to sic on the jehova's witnesses that keep attacking your houses~ 83)

Dang, that looks like it hurts! ;-; I need to stop watching horror movies. Now,, all blood I see, even through anime pictures creeps me out.

Ah yes getting decapitated is never a pleasent experince xD

And dark angsty pics is what I LIVE to draw! Wont see no fluffy sugary crap in mah gallery xD

Nice shocked expression on his face, like that was not a direction he expected that to come from... I think I'll have to get you to do some angsty wounded Ed pics for some of my fics... I think you could do them quite good justice... ;)

-big sparkly eyes- Realleh?! Omg I would love to do some angsty Edo pics! Just make sure to send me some scenes Via PM (Not links though...dial up compy blah x.x) so I can get a feel for the scene.

Anywhos enough ramblings, zomg thank you soo much, I'd luff to be your manga-ka! However I do hope my red marker can withstand your requests lol. xD

Love the way you drew the blood >_<

Hehehe thankies xP I think I could have done better thoughs

You did better than I ever could .__. *sucks at blood splatter*

Jeez Sarah, said getting better with proportions and all, now it's better at shading?!?!?!?
WHAT THE EFF?!
The blood splatter...or gushing out looks good, poor Ed, he better be doing all this for good cause in your book!

I think ya mean fanfiction, and yush all his @$$ kickings pay off very well towards the end when he himself deals some heavy rear kicking x3