Son of Oblivion by SweetxinsanityxSarah 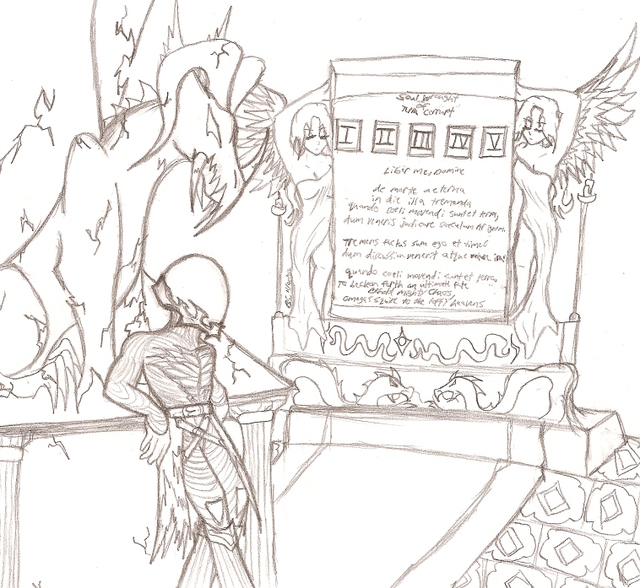 "Hello darkness, my old friend, I've come to talk with you again
Because a vision softly creeping, Left its seeds while I was sleeping
And the vision that was planted in my brain, Still remains..Within the sound of silence.

In restless dreams I walked alone...Narrow streets of cobblestone,
'Neath the halo of a street lamp...I turn my collar to the cold and damp,
When my eyes were stabbed by the flash of a neon light, That split the night,
And touched the sound of silence

"Fools," said I, "you do not know...Silence like a cancer grows,
Hear my words that I might teach you...Take my arms that I might reach you",
But my words like silent raindrops fell...And echoed in the wells of silence. - (MUSIC INTERLUDE) -

And in the naked light I saw...Ten thousand people maybe more,
People talking without speaking...People hearing without listening,
People writing songs that voices never shared...No one dared
Disturb the sound of silence

And the people bowed and prayed...To the neon god they made,
And the sign flashed out its warning...In the words that it was forming,
And the sign said "The words of the prophets are written on the subway walls
And tenement halls, And whispered in the sound of silence".
Sound of Silence by Tommy Fleming

Yeah had a few pics I've been meaning to upload, this one kinda just collected dust for awhile until I finally decided to pick it back up. xP
Twas a practice sketch of both Vanitas with his helmet on and backrounds, I have to say it's good enough to color..however it would not be justifed if colored by me. X_x

So yeah if anyone wants to take a shot at this please inform me first before putting a paintbrush to this peice. >>! (AND GIVE ME CREDIT FOR THE LINEART KTHANX!)

Anywhos I am rather proud of it, might try to draw more of Van in his helmet...for some reason he looks sexy in it despite the fact it looks like a goth power ranger outfit. -ducks!- Ha missed spikey! xP

View, comment, and WORSHIP TEH VANNY! Or fire-breathing waffles shall eat your livers~!

Ooooo, very nice indeed! I love the cracks on the statue thingies!
Now you just need to color stuff and you'll be set! ;P

Thanks, just whipped it up out of boredom xP

That is cool. I loved that game!!!

Thanks, I have yet to get my hands on it. Though I finally got God of war 3 thanks to my bro. x3 (Now if only I can sucker him into getting me a Psp then Vanitas is as good as mine mwahahaha!)

Awesome game that GOW!!! I have not played birth by sleep but watch it on youtube...i a cheater^^

Thanks, the backround still needs a tiny bit of work though xP -never satisfied!-

Very nice. I like the bit from DOC in the tablet hung by the girls.
Shame I can't read the rest of it.
Suit's Vanitus very well actually

Ah you have a sharp eye, the rest is actually from "Libera me" from Interview with the vampire." =P glad you like it and yes it suits him well.