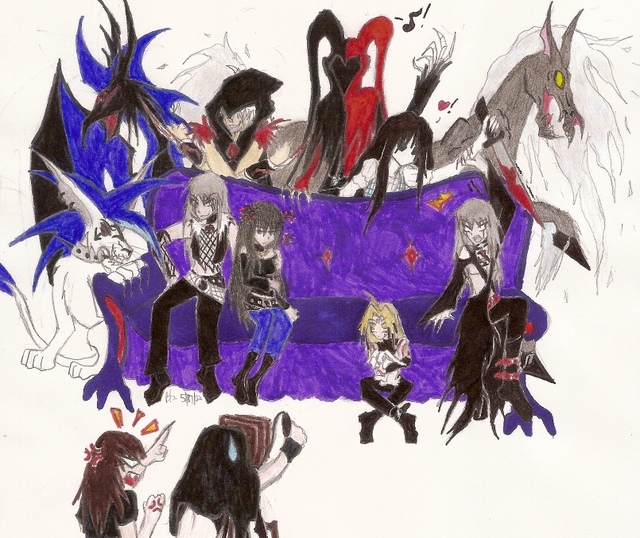 Xal: -slides arm around Sarah- Someone had best call
heaven, for they're missing an angel. x3

Sarah: -twitch- Yes they should...because they're about
to get a new member. >->

Mojo: -humming chocobo theme to self-

Me: Xaliirekur quit hitting on Sarah! Joachim no
claws in the furniture. Akifa, put those hidden
Blades away you'll hurt someone! Anna Belle, would it
kill you to go five minutes without trying to
hack someone to peices?! Be more like Abel; he may be a cannibel but at least he knows when to behave! D<

My contest entry for the mother's day contest. I couldnt pass this one up..though I am kinda last minute hehe.
My theme for the picture is; you know when a mother has such
a hassle at getting her family to pose properly for a photo?
Yeah not a very fun chore, and with a group of 'children' like this, it's even more of a hell! xD

But yeah, there's some new faces along with some old, so let me introduce ya to em incase you dont recognize em:

Also if you are wondering what that odd thing next to me is; it's a poor attempt at someone taking one of those old fashioned photos with a camara that you have to hide under a curtian thingy. And Jealous of Ultimo is taking the pic..since he is my doji after all. xP
And yes, Anna Belle and Innoruuk/Magnus are the newest duo of my lil litter. I'll be sure to give more info and pics on them later however.

But yeah, hope you enjoy it..would have added more characters; but then the pic would have been bigger than it already is lol.

View and comments, or I wont send you the results of the photo when my babies finally decide to pose! xP

Woah! Dude! You make some AWESOME creatures! I am envious of your skill!

Hehe I do indeed have a twisted lil imagination. x3

AHHH! No, return it to its 900 pixel size! The previous size was perfect! The small size makes it hard to see THE FREAKIN AWESOME DETAIL. I love how you are shouting at the cameraman. You are probably like, "Make sure to get my babies in their PERFECT poses! Go on! I do nto want one mistake! I am paying for you this!" ...Why can I picture Sarah as that type of mother so well?

AHHA I love how everyone is interacting with each other so well- watch out she has a GIANT sword/kitchen knife...AHHH! That is what happens you put all of them on one big purple sofa. >:/ The bright purple color makes them go crazy. That is one crazy looking horse OC on the right! AHH he should be in a cemetery, not behind a sofa in a photoshoot! GOD DANG IT WOMAN, let him go to pillage like he should be doing! Or he is grounded!

Actually I'm nagging my babies to sit properly on that crazy purple couch...but yeah I am indeed nagging Jealous too to get the picture right. xD

Yush Anna Belle does indeed have a big machete...or is it a kitchen knife? Ah I dunno, I was inspired by Alice's vorbal blade. xP

And that big horsie is named Erebus, and yes he wants to be somewhere else right now, as in at Sephiroth's (His masther's) side chasing Cloud down to gnaw on his hairz that looks like hay. 8D

But anywhos, apologies for resizing pic, but it was tooooo much scrollage. X____x but at least you got to see the epic detail of the larger version! =3

O_O WOW! I bet that was a hurting your hand near the end...12 hours and more...crap!! I love the horse in the background and that joker. There is so much detail in this too which is awesome and a lot of black...I wonder how much of that black that you have left haha

Ha indeed, but I took breaks between the sketching and coloring. (Mostly to feed my kitten Les, aka the gold one I wish to be with Seph in a pic. xP)

And yeah, hand was cramping up abit. And yush Mojo and Erebus are epic. (Though I screwed up abit on Mojo's checkered R&B color scheme, dammit! Dx) Yes alot of black indeed. I used a black marker AND a black pen lol. But no worries, I still have plenty on hand. ;3 (For black ish the new black!)

Sadly, at the moment my brain will not let me draw ANYTHING=_= I tried and tried but grahhhh!!!!! Anyways your welcome

Ah no rush, just dont take three years though lol. xP
(Oh and I used another form of black lol. Three dif blacks for this! daaaamn.)