That Mocking Grin by SweetxinsanityxSarah 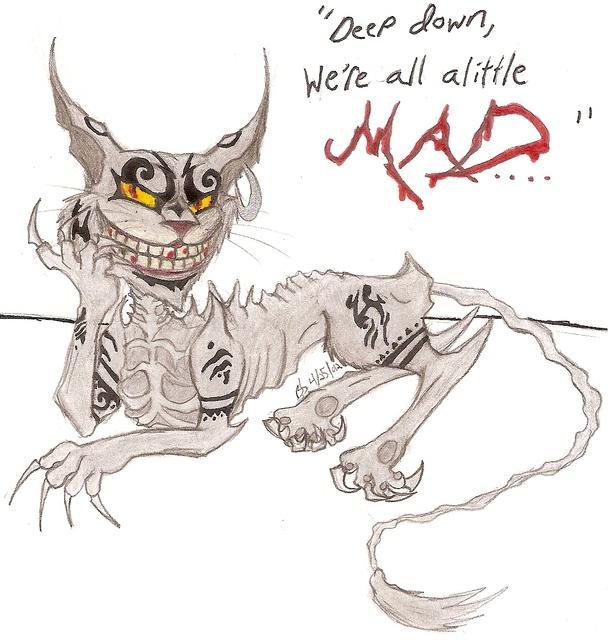 Cat in the Madness

A wide never-ending grin that stays when it's
owner is gone,
Slitted yellow eyes filled with madness at
the lack of dawn.

Skin stretched taut over lean ribs with
many jagged scars,
A ragged ear, a silver ring gleaming
like the stars.

He knows not bravery, preferring caution
and his life,
His insane smile remains unchanged by
Wonderland's strife.

His cryptic answers only serve to madden
and confuse,
He takes high risks and stakes, but never
does he lose.

He fades into view at your beck and call,
Explaining blades, cards, croquet hammers
and balls.

Other times he comes when danger is not
near,
Laughing at your worries with an accented
sneer.

His voice puzzels all; his patient rhyming
makes one snarl,
He talks of death and treachery, makes lies
into moral.

A last swish of his tail and he vanishes
with a crazed leer.

~Poem by Raija Darknight of Fanfiction.net

But yeah, I was inspired to draw this peice when I saw one of the original concept sketches of Cheshire from Amercian Mcgee's Alice; and I thought "He doesnt look right. Too fluffy in the face." So I drew my own version of the pose with the final version they chose for AMA and Madness returns. Gotta say, this version looks much better; dont ya agree?

(This is the concept sketch ^)

The ribs and tattoos were enough to kill me, but what really irked me were the ears. First I drew em too big, then too small, etc. Finally after the fifth try, they came out just to my liking. And after that chore was done...the coloring process came..oi vey. X-x
Marker for the eyes, pen for the tattoos, and grey and tan for the fur and teeth, red and brown on the nose...and I thought the disney one was complex in colours! xD

But anywhos, do enjoy this wicked lil kitty, and tred cautiously in mah Wonderland or be gobbled up by the Jabberwock! x3

Indeed, this is my favorite rendition of him. x3

You should know by now creepy is my forte. xD

This just made my freaking dayXDD I LOVE LOVE LOVE this game and you did an awesome job on this "wish I could have" kitty. I'm actually going to be starting on a drawing of him sometime soon and I hope I can do as good as you did^^ Again, just freaking awesome!!!

Lucky~! I have the game too..but I cant play it since my brother's ps3 is on the fritz. So right now it's just taking up shelf space. ;-;

But yeah I love this guy too! I have ALL his quotes and riddles, just purely amazing he is. x3

And I ish glad I made your day nn

Well, I don't actually have the game but I did watch a walkthrough of it hehe I sneaky lol your welcome

American Mcgee's Alice is where he came from. And his upgraded look comes from Alice Madness returns. xP

Dont give me credit for the pose or grin, that came from the concept sketch. I just drew the Madness returns/final AMA version in that pose. xP

kay but you pulled it off well^^