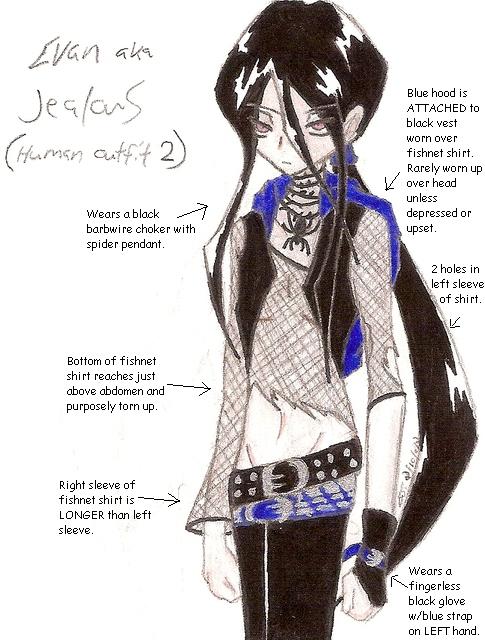 This is Evan, aka Jealous/Jealousy the Envious as he appears in human form in "Along Came a Spider", the fic I am working on at the moment. Reason for the new clothes? Well when he first takes on a human guise around Kikai and Ming Ling, they quickly burst into laughter; proclaiming he looks like a Jehova's witness, and that's a clear sign to the sin that this outfit wont help him blend in well in a town such as their's. So instead of walking around looking like "A bible thumping spider." as Kikai pointed out, he lets Ming Ling give him a makeover.

A trip to Hot Topic and a few purchases later and this is the new improved Evan! He chose mostly black and blue items for his wardrobe..avoiding pink as much as possible considering he wasent in the mood for more of Kikai's jokes that questioned his sexuality. xD

But anywhos, teh outfit ish my idear and design, so DO NOT steal it!! I mean it, if I find this picture anywhere else or on someone else's OC, I swear to god I will gut you. Then I'll jump rope with your intestines while hanging your body out to dry before then using the skin as toilet paper! >/

And for those who are curious, I put notes on the picture, cause well; I miiiight want someone to draw him in this outfit in the future. So yeah; PAY ATTENTION TO THE NOTES!! >O
Oh and the belt underneath the black one, yeah that was a failed attempt at Riku's belt in KH2. xP

View and comment, for it brings meh joy. x3

Thankies the outfit was tricky but I got a solid design down in mah head.

Black is the new black! 8D

Ty, and if you draw him in this particular outfit...be sure to give me credit!

Otherwise if you just want to draw Jealous himself, look in my 'canon character refs' blog, there's a whole shait load of refs of him in there. xP

(And if ya do draw him, notify me cause I wanna see eet! x3)

Good expression on his face

Thanks, but that's his normal everyday expression he wears in the manga. xP