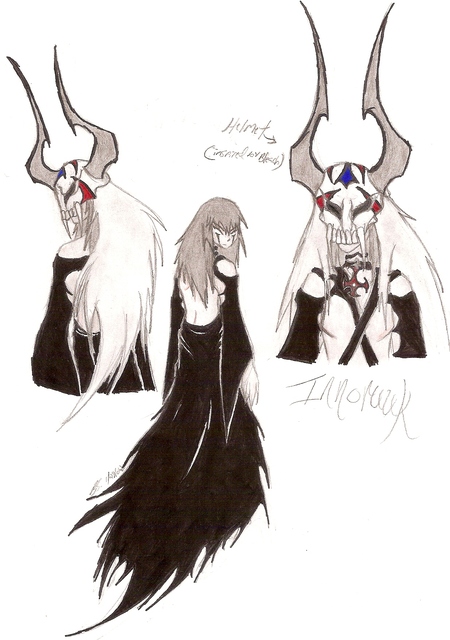 Just another shot of Innoruuk/Magnus. This one showing off a back view of his outfit, and his stylish yet familier headress. x3 (Yes it was inspired by Bleach's Ichigo stfu!)

One would speculate why infact he wears it. Some say to conceal his face to those he deems unworthy to see it. Others say it's to frighten his victems so he doesnt have to waste too much energy to eat their souls. Whatever the case, it's a sight you dont want to see coming your way. ;3

Now since his bio is in his previous pic; his powers come into play in this one. Unlike Xal, he is not effected by the moon in any way, since he depends on souls to thrive instead. The more he has, the stronger he is, and vice versa. And like with Raziel; he can shift between the realms of the living plane and the spiritual one. Unlike Xal who needs to depend on his wings to fly, Magnus can levitate and glide on his own; much like their father. And his clothes are more than meets the eye. Not only are they trendy; but they are a weapon too. The torn and tattered bottom fringes of his outfit serve as tendrils that whip or grab his opponents and can even impale and cut if needed. He can morph his fingernails into diamond hard talons that can stretch out to great lengths as well. (Inspired by ol Lusty of FMA. x3)
And if those powers fail him, he can use his own blood as a weapon, summoning a sword from his wounds to use in combat. Or projectiles though he much rather prefers a sword.
Plus like with Xal and his wyverns; Magnus has his own little army at his disposal. They are simply dubbed 'the lost children/ones' and are shadowey humanoid looking entites with glowing red eyes. They range from little children to full grown adults and harbor many sharp weapons consisting of swords all the way to butcher knives and arrows. (These of course were inspired by the shadow children of the banshees in Fable 2, and the minions of 'the darkness' in Fable 3. =P)

But anywhos, do enjoy this awsome lil pic...killed 2 of my ink pens along with the previous one. And if you are confused, the headress is a whispy white NOT silver. xP

Thanks, outfit was mostly my design...though the headress does ring a bell to another certian design...

(And I did say it was inspired by Bleach so yeah. xD)

Thanks but give Bleach credit for that one. xP

the mask looks really neat, reminds me of ichigo^^

That's where I got the idea from haha. x3

Looks intresting and i like the helmet
Good job =)

Thankee, I'm proud of his two back poses, the third looks abit wonkey and was rushed. xP