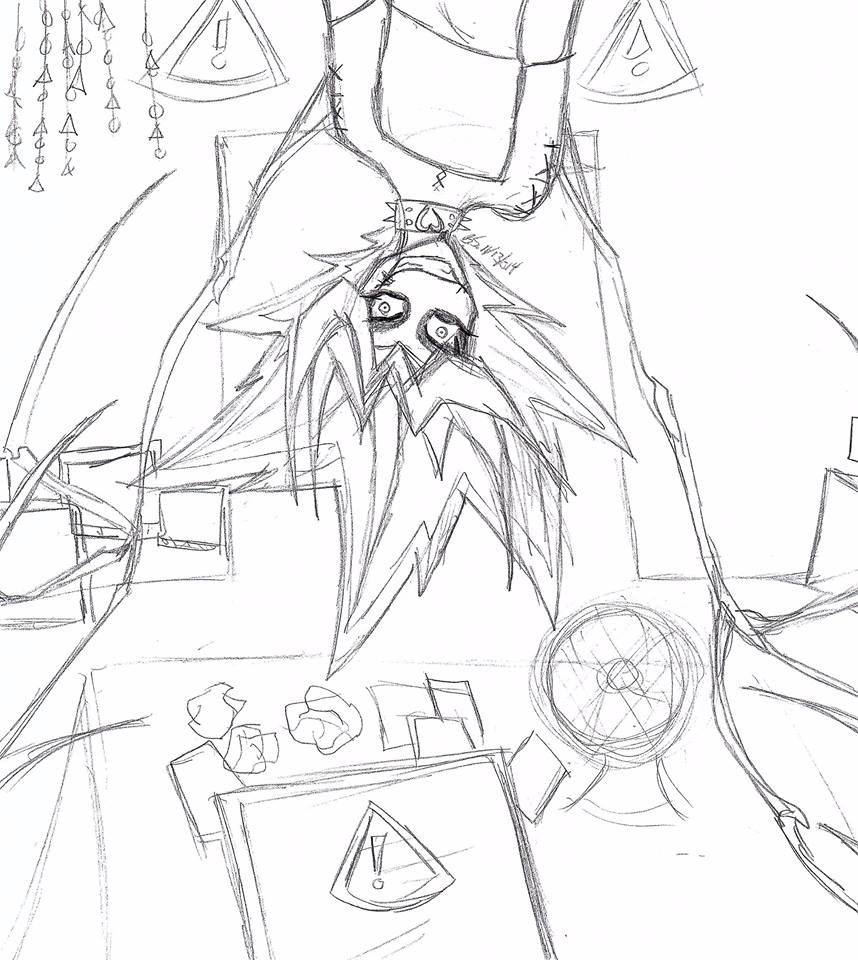 Since my buddy has her scanner up and going, decided to bring over some of my work that is wellllll overdue in showing to the masses.
So first up, some first time ever revealed to the public Rotten Toy sketches coming at ya! 8D

This one was made during the big hype of FNAF2 coming out; and was my take on how Rotten Toy would off the security guard if he failed to pay attention to the screens. >3

For him to pop up; one would have to be extra careful for his debut on night 3; along with golden Freddy of course. To trigger him to go on the prowl, you'd have to keep spamming the hell out of the camera that watches the services and parts area. IF you see a black silhouette of him standing in said room and dont flip to another camera fast enough; his march towards your office begins.

You will catch glimpses of him staying in certain corners of the room, or on the ceiling much like Mangled, and a tune plays with him as he moves closer and closer; London Bridges. (very much like with Freddy's tioir de march plays when he's coming closer to your office in the first game) but he's much quicker, he does not linger on the cameras like Mangled and freddy do, and you have to be very quick in flashing the flashlight at him on said cameras..or he'll continue coming towards your destination. The cameras he lingers on the most are the vents (From either side) or in the party rooms, and very rarely in the hall going to the office.

If you are lucky, you can catch him hanging upside down in the same spot Foxy lurks in the hall and flashlight him into submission, the only warning you will have is the London Bridge song starts playing when you are not watching the cameras, giving you a chance to look up and catch him in the hall. The song will cease if you successfully chase him off.

If you FAIL to do so...the song plays very loud in your office as your camera is forced down (Much like with when freddy and bonnie or chica yank down your camera) and you watch in horror as a voice sings in french along with the melody, forcing you to look around for the source of the singing, then at the last moment, this precious little toy swings down on you, wings lashing out to grab you like giant hands...and tearing you to pieces as a twisted grin from this mad doll is the last thing burned into your memory before you cease to exist....

Just my take on how he jumpscares ya is all, do enjoy the picture that accompanies it. >8D

(Fan variation of atem aka Rotten Toy belongs to me, FNAF series belongs to Scott Cawthorn!)