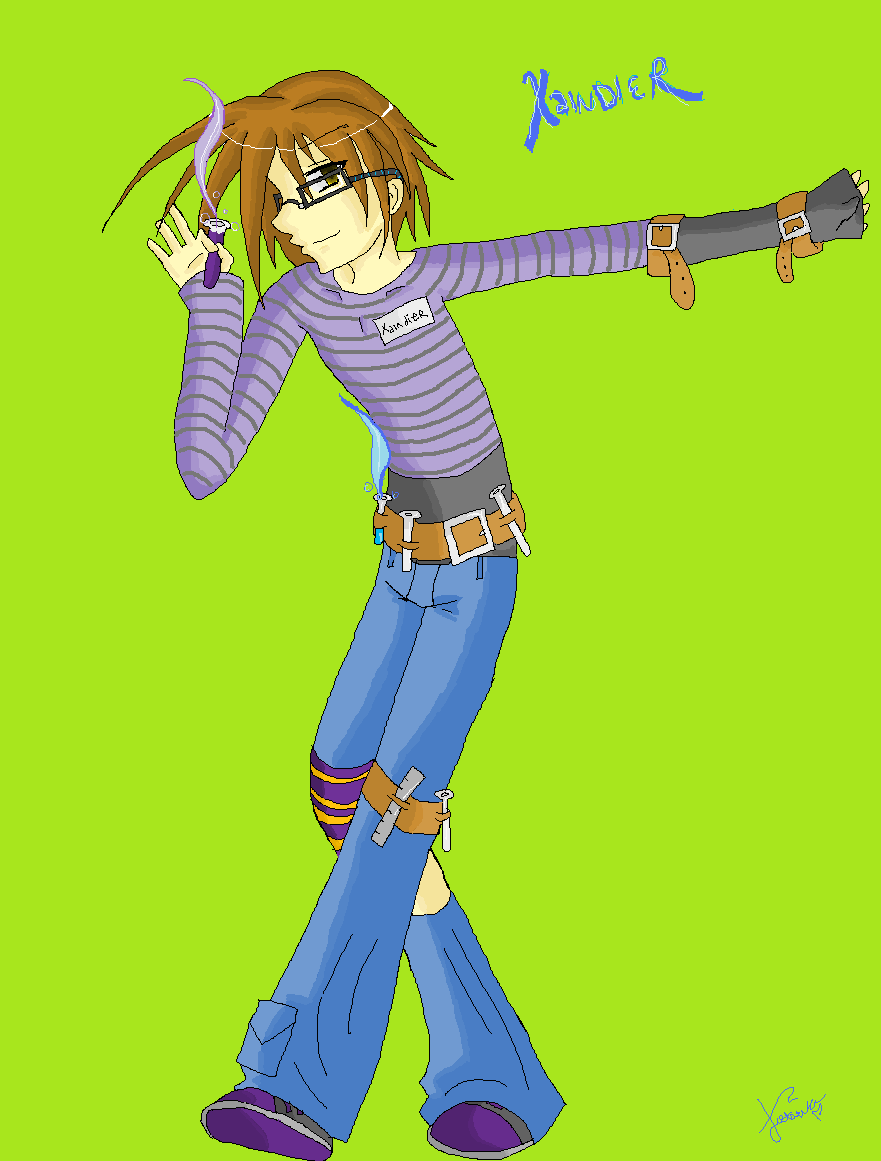 Wowie, I got two done in one day 8D
Well, I only have one more entry (That I know of)..Will try to get that up tomorrow <xD

Past: He'd always been talented with cooking, Making new things by combining other things. When he started learning science in school, it interested him, and he began to study it more on his own. He'd form his own experiments. He decided then he wanted to become a member of EMINC. He devoted his whole school life to learning chemicals, and other things that would help him become a member. At the age of 17, he had acquired enough knowedge to become a member of EMINC and to begin his experiments.

Behavior: He loves making something new. His dream is to create things again, better then what they were. He has a deep hate for all the resistance.

Fighting Style: He doesn't fight, really,...but if he's threatened, he'll bring out one of his syringes of chemicals, and make the one who's bothering him become an experiment.

Family: His father was killed when he was younger by a member of the resistance. His father worked for EMINC.
Mother- Is worried about his involvment in EMINC, but continues to support what he wants...

Friends: He has close to no friends to speak of, He's pretty arrogant when it comes to his work, and refuses any help on his experiments. He was never outgoing at school, and was so interested in science, he blocked out all distractions.

Powers: Again, nothing out of the ordinary, unless you call inserting an unknown chemical into someone's body a power?

Dislikes: The resistance members, Failing, When an experiment goes wrong, being interuppted while experimenting, People who critize him, the whole angel race, most males.

Personality: Extremely arrogant and prideful at his work. Loves showing people what he's created. He hates it when an experiment goes wrong, or they opposite of what he wanted. He really hates the resistance for making things difficult for him. He loves capturing people from the resistance to experiment on them.

You're so creative Luzzu-san. Nawce job on this wonderful sunshine. >:D

Well, in my happy fantasy world anyway c:
You have such talent xD PLZ SHARE, NEED SUM. Nyan! Your character profileas are so interesting to read as well c: I'll be very much interested in seeing him in the story if he makes it :BBB Nyan! Awesome Luz! *taps on the head*

Why Thank you c:

8D*gasp*science ish my fave subject too!but i like animals better then chemicals. i wonder if hes ever seen a catgirl before?x(please dont do experiments on me, ive had enough trouble with that.

*steals his shirt too*

what is it with shirts?

Oh, Why thank you, Crypto Cx
Ohhh~ I dunno... :B
I wanted to steal his shirt too though xD

;w; Omganotherone.
THANKYOULUZZU. xD
One more huh?
I'm excited. :>
And love him as well. xD
GAAHHH...this contest is gonna be hard.
I already love most of the entries.

cx
Thank you very much Kaj ^3^

Thank you very much! C: