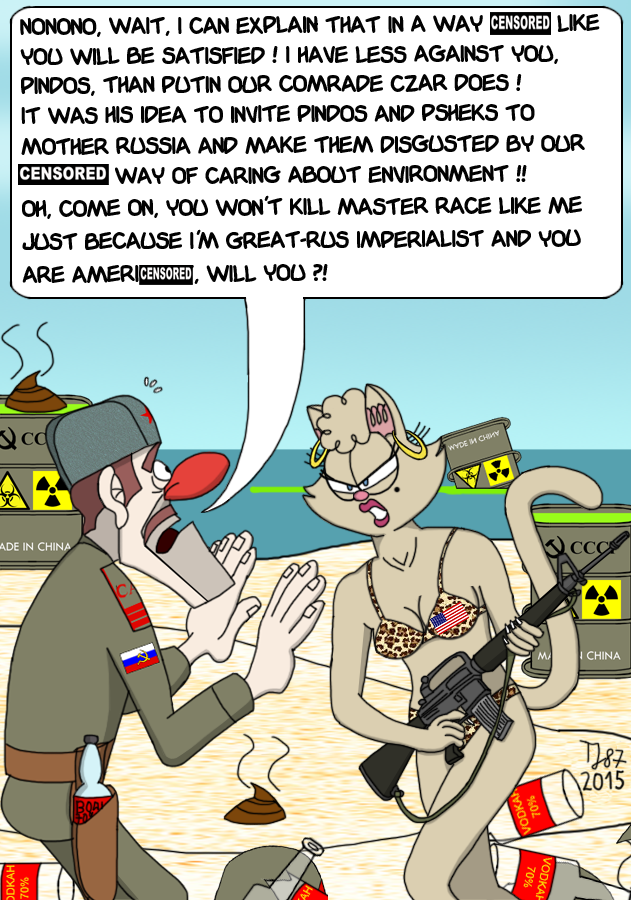 Our feline heroine http://garfield.wikia.com/wiki/Penelope_Pussycat has just learned the same lesson as her sister Mona did in 2013 http://www.fanart-central.net/pictures/user/TeeJay87/840298/Mona-on-Horrible-Holiday - that spending holidays in the land of Putin and his thugs from KGB/FSB (formerly NKVD) is bad idea, just as it was proven here http://en.wikipedia.org/wiki/Environmental_issues_in_Russia

Dolt-on-istov http://www.fanart-central.net/pictures/user/TeeJay87/840018/Dolt-on-Istov-Hero-of-Soviet-Union has also learned something - that liars have really short careers.

This picture is promised gift for my pen friend Gavin, who accompanied me on dA and is still keeping in touch with me on Skype. If I did not have such amount of chores at work and classes, this gift would have been done last year.

Hehe, that M16 will teach him a lesson for sure :D
BTW, is it just me, or he was really inspired by one of the Dalton brothers from Lucky Luke? He reminds me of Emerald from this view a bit.

You're absolutely right about similarity - Daltonistov, or Dolt-on-istov, is direct descendant of Averell Dalton created in my story:

In 1910, Lucky Luke defeated the Dalton brothers in gunshot somewhere in San Francisco, Averell was the only one, who managed to escape. He found a ship, which brought him to Vladivostok in Czarist Russia, then he travelled to Moscow, married Russian woman there and settled down as Averell Daltonistov. They had a son Averell Averellyevych, born 1911, who joined the Soviet Army in 1929 and fought in WW2, his military career was broken, when he died during Ussuri River war with PRC in 1969.

But before becoming hero of the Soviet Union, Averell Averellyevych had his son Dimitryi Averellyevych "Dolt-on-Istov" Daltonistov born in 1950 - he's the one, who's having issues with angry Penny. xD

Then I guessed right ;)
Honestly I didn't know about the story of Averell. Recently they have aired the 2001 series of Lucky Luke cartoon on a Hungarian channel, and I heard his name as Emerald mistakenly, so sorry for that.
Anyway I knew that the Dalton brothers did exist in real life as well, and the cartoon characters were based on them, even only three of them were in the same gang while Bill Dalton was in an other one: ​http://en.wikipedia.org/wiki/Dalton_Gang

Perhaps that's because it's my own-made story, not official canon. ;)

As for real Dalton gang and their comics/cartoon counterparts, Morris and Goscinny (who created Lucky Luke) did admit once, that Joe, William, Jack and Averell were supposed to be cousins of the original Dalton gang.

I think I have a jolly good idea of these censored words!  lol

Back in the USSR!
Your amusing little stories about these silly commies are amongst my favourites.  :D

One of the censored words is model example, how did communist propaganda in the Soviet Union spoil its own people - by making word commonly considered as offensive in Polish and Russian, meaning female reproduction organ, be used to describe female citizen of the United States. This word remains offensive one in Polish, while Russians (especially commies, neo-Nazis, nazbols and Putin's electorate) consider it as normal word for everyday use.

Another word has been censored, because I'm aware that not everyone in the West understands our Polish idiom about "doing something in Russian way", despite it's been in common use since 1820s, when Great Duke Constantine Romanov and his subordinates kept violating laws casted upon us, Poles, by the Czars from Romanov Dynasty themselves and nobody in Sankt Petersburg cared about such abuses. So we made up a term "to respect law in Russian way" meaning "to respect the law by not respecting it" , which was later expanded into almost every activity. It's funny that the occupants from Moscow didn't care about use of this idiom during the first Russian slavery (Czarist) 1795-1918, but they did much during the second Russian slavery (Bolshevik) 1939-89 - it was a crime against "the brotherly Russian nation of the Soviet Union". xD

I've intentionally left words "pindos" and "pshek" uncensored from two reasons:
- those sound less offensive to people, who don't know Russian;
- I believe that such proofs of Great-Rus pro-Soviet imperialist chauvinism must be seen in public, so people will know the truth about fanatics of socialism.

And I appreciate your kind words - it's been times silly commies had appearances in my works, it's about time they proved they're remaining Stakhanovs of comedy. ;)

Well, I had guessed the first word:  txxt
and the third: cxxt

but not the second, which is very specific    LOL
(  for the second I thought it was the usual: fxxxxxg   )


thanks for all the linguistic and cultural details!  ;-)

Those, who are interested in seeing version without censorship marks in Dolt's quote, are asked to let me know - I will pass you original file through email, since I doubt the pic can be posted due to one rude word used by our Hero of the Soviet Union.