One Aimed Shot Will Teach That Dolt

Home » TeeJay87 » Pictures » One Aimed Shot Will Teach That Dolt

One Aimed Shot Will Teach That Dolt

One Aimed Shot Will Teach That Dolt by TeeJay87 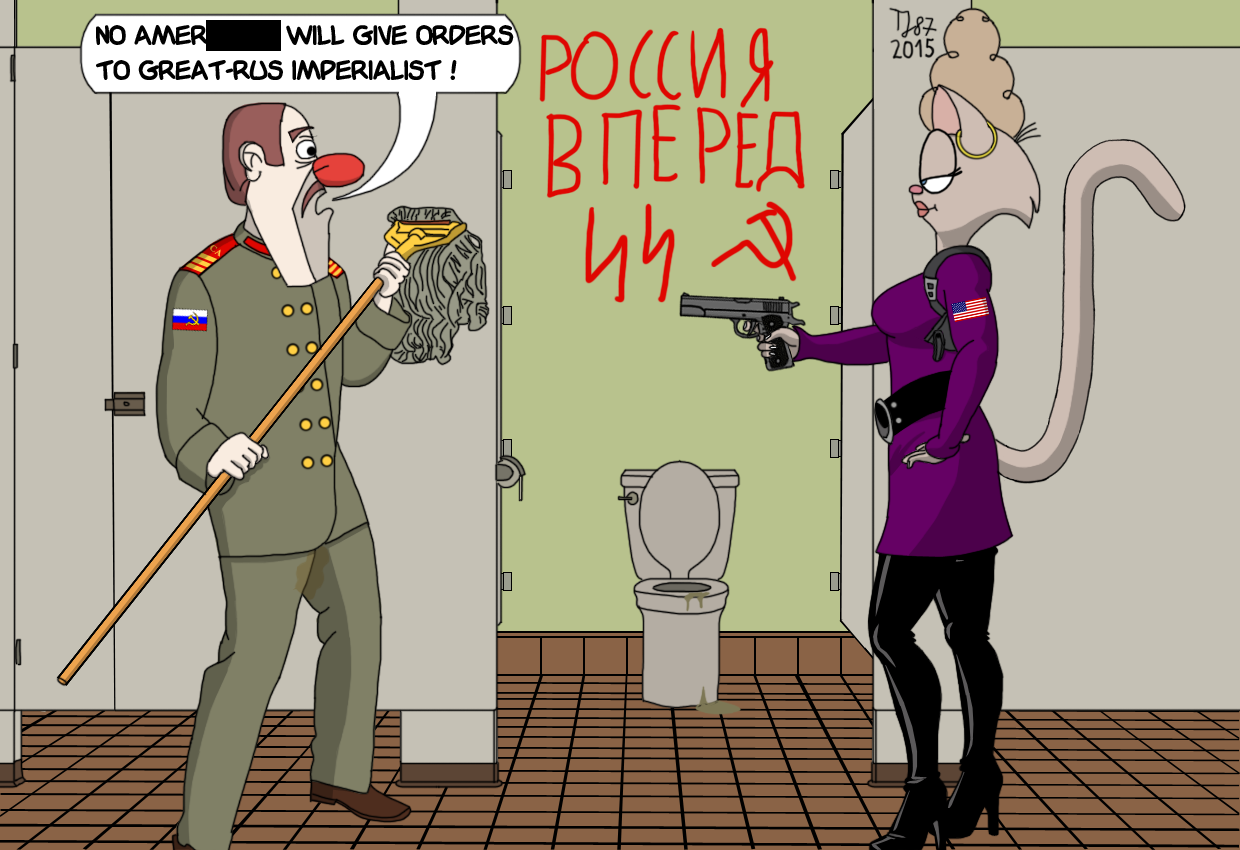 Dolt-on-istov has a talent for finding himself in trouble with members of country he despises - first with Penelope Pussycat http://www.fanart-central.net/pictures/user/TeeJay87/843169/Dolt-in-Trouble-2015 , now with Mona, who told him to clean up the mess in the toilet. He should really consider converting to religion, which forbids drinking alcohol, or at least attend therapy for AAs.

Graffiti in Russian above the toilet seat depicts slogan "Rossiya Vpyeryod" , which means "Russia Forwards" - it is catchphrase for Moscovian neo-Nazis, communists, Great-Rus imperialists and Vladimir Putin with his henchmen.

A little gift for my pen friend alitta2, based on scene from Archer TV series.

Haha, then he should convert to islam I guess XD And now I see that he pissed in his pants because of fear :D
Anyway thanks alot that you dedicated this pic to me ;)

Not necessarily to Islam - couple of Protestant churches discourage drinking alcohol or even prohibit drinking it http://en.wikipedia.org/wiki/Christian_views_on_alcohol#Abstentionism , mostly Baptists, Pentecostals, Methodists and the Salvation Army do. As far as I remember, Buddhist monks of all branches also maintain alcoholic prohibition inside their orders. The only problem is Dolt's nature:
1) he was raised in environment, where one of the principal rules is "Religion is opium for people, so it should be eradicated"
2) Buddhism reminds him people considered by Russians as "inferior Asiatic race" (despite Russians are 75% Asians and only 25% Slavic xD)
3) last but not least, he views Protestantism as part of Western culture Great-Rus imperialists like him openly despise, especially their accursed rival country they call "Pindostan" ( the USA).
In short - betrayal of the values he's been raised inside would be too great burden for him. LOL

Dolt is supposed to have his mind trapped between opposites; both his anti-Americanism (notice the way he calls Mona) and fear of 0.45 ACP are strongly planted in his sub-conscience. Conflict between those two emotions caused his entire nervous system to be incapacitated; if you add his lack of self-control to the image, you'll get a portrait of a bloke, whose prejudices are so stupid that amusing. xD

My pleasure, since you like similar humour than I do, I thought you'd accept small gift from me. ;)

Thanks for the link much! I'd previously thought that the Mormons might deny alcohol, or at least they don't really advice the consumption of it for its believers, but I didn't know about the point of view of other Christian religions. And yes, I've also heard that Buddhist monks are against it, considering the alcohol to be sinful, but maybe this prohibition is only valid among them and not for all the followers of the faith.

Anyway, as his grandfather was American, so actually Dolt is partly that, maybe he could be confused about hating "pindos", because it's like hating himself, isn't it? :D
I know a Serbian guy, whose grandfather was Hungarian, and he also speaks it more or less, but in a paradox way he still hates Hungarians, so that's why I think the same about Dolt :D

Couple of my pen friends from dA are Protestants from various churches,who don't drink due to religious and moral beliefs. I agree with them about bad influence ethanol has on liver and brain cells, when abused, but when used in reasonable quantities (1 beer can/1 glass of wine/1 shot of stronger alcohol per week), it makes good mean of purifying organism from bad germs and worms. There was also cardiologist research made, that small amounts of alcohol enhance the beating process of heart. Paracelsus http://hu.wikipedia.org/wiki/Paracelsus was right with him statement, that "The dose makes the poison". ;)

As for Dolt and his emotional crisis, he does have voice of reason reminding him his heritage, but the voice is usually sunk with ethanol. xD

Yes, I've known as well about the curing ability of ethanol of a certain amount, especially the drinking of red wine is thought to be good for health because reportedly it can help to regenerate the red blood cells. Also a super-centenarian woman has recently said when she was asked about the secret of her long age that she has drunk a glass of red wine each day.

About the last sentence, I've laughed a lot because of the reason XD

Since we're talking about comedy... Some time ago I found this clip https://www.youtube.com/watch?v=i-zVikni77k with Hofi Geza and Koos Janos.

I don't understand much from their speeches (apart from "macska" meaning "cat" , "eger" meaning "mouse" , "randevu" - "rendes-vous" (date) ), though I understand it's sort of wacky mouse-hunting performed by those comedians. ;)

ah!    the ravages of alcohol!
and the devastation caused by alcoholic and stupid popov!  :D

Dolt is living example of the way alcohol affects the nervous system, especially by damaging brain cells. It can't be excluded, that popov he's been consuming for most of his life has already started to flow inside his organism, covering his neurons and glial cells, thus preventing them from their natural development http://en.wikipedia.org/wiki/Nervous_system .

Hopefully, there's a reliable way to let off the amount of ethanol/methanol from his organism - 0.45 ACP* JHP** round from Mona's Colt M1911A1 should be more than enough to purify Dolt's organism from alcoholic poison. ;)

Nurse Mona has a very effective and radical cure for the plague of alcoholism!  ;-)

BTW, when I used the word "popov" I meant russians;
(many russians have their name ending with "pov").

Radical diseases, such as communism, Nazism, anarchy, feminazism and the rest of variants of socialism, require radical treatment. Especially since those, who suffer from these disorders, are known to lack patience - they expect everything being carried out asap, best as violently and rapidly as possible. LOL

I thought "popov" meant their beloved strong alcohol, not the nation itself. You're right about Russian family names ending with -ov suffix, some examples are below:
- Andropov
- Stakhanov
- Zhukov
- Yershakov (commander of Soviet 20th Army during the battle of Moscow 1941)
- Maslennikov (NKVD general, second-in-command after Beria)
- Dalmatov (commander of Soviet 31st Army during the battle of Moscow 1941)
- Sakharov (actually one of those decent Russians)
- last but not least, Dolt-on-istov/Daltonistov himself. ;)

nice hair on her^6

That's the hairdo she has in cartoon http://garfield.wikia.com/wiki/Mona , just with slight modifications. :)