Volodya the Volk-o-shevik by TeeJay87 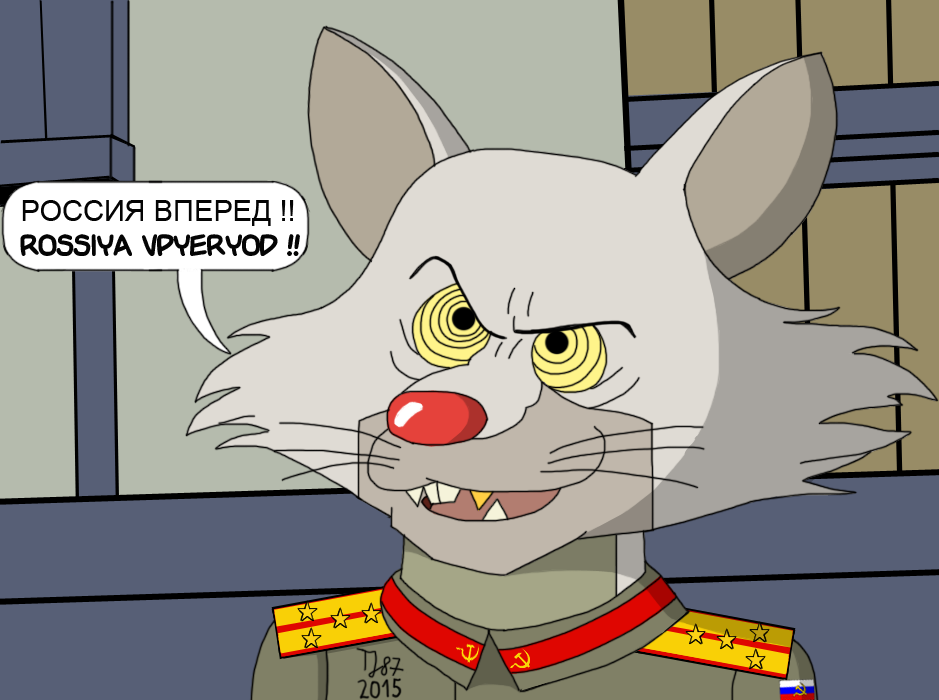 The canine Soviet Army captain I have depicted above was developed from my old works drawn between 2008 and 2010 when I had dA account and drew wolves in such uniforms. Partially it was a tribute to "Nu, pogodi!" cartoon, partially because the members of CPSU did behave towards others following old Latin saying Homo homini lupus est. In other words, their behavior reminded me carnivores from Canis Lupus species that much that I found depicting them as such matching.

One of the depicted was a villain from "80 Days Around the World with Willy Fogg" named Transfer - the way he behaves towards protagonists makes him model example of leftist corrupted by Marxist lies.

In my story, somewhere between stories from movies "80 Days Around the World with Willy Fogg" and "Willy Fogg 2: Journey to the Center of the Earth", our leftist canine from London had a romance female member of Russian 19th Century socialist movement, which was never legitimated since socialists consider marriage as institution of capitalism they oppose with efforts worth better cause.

The fruit of that "international meeting" was illegitimate male wolf, half-British gray wolf, half-Russian Siberian wolf, who returned with her biological mother to Russia to take part in the October Revolution in 1917. Transfer did not make it, since he died of alcoholism somewhere around 1907. His son, named Ivan Transfyerovych Paskudnikov (1884-1943, died in combat during the Battle of Prokhorovka, last name after his mother), took part in the entire Russian Civil War 1917-22 as red infantryman, becoming infamous of the way he treated religious people and those, who lived from agriculture (he simply shot them in forehead from his gun).
Son of Major Ivan Paskudnikov, was Igor Ivanovych Paskudnikov (1923-1968), who took part in WW2, reaching the same rank his father did, only to die in Vietnam during the Tet Offensive as NVA advisor from Moscow, when he decided to face US Marines in the City of Hue in open combat. Before becoming posthumous hero of the Soviet Union, Igor left his son Vladimir "Volodya" Igoryevych Paskudnikov in Moscow (born on 5th March 1964). Volodya is that wolf in Soviet Army uniform in my picture above.

The title of drawing "Volk-o-shevik" was developed from words in Russian volk ( "wolf" ) and Bolshevik - merger between those two makes "Volkoshevik" ( wolfish Bolshevik or "wolfwere Bolshevik" ). As you can see, Volodya Paskudnikov has all the worst traits of Great-Rus imperialists, being obnoxious, rude, egoistical drunkard, who considers Russian nation as master race and every non-Russian as "subhuman". Definitely a fellow you would not like to invite for your own party.

The background is supposed to be distillery in Moscow, producing strong alcohol in great quantities. Every day there are couple of crates of alcohol missing from production and somehow nobody managed to find out, that Volodya is responsible for this theft. Pardon, not theft, but taking property of the Soviet Union for himself.

So Volodya comes from a bloody lineage of  wild reds!

Volodya has socialism and madness circulating in his canine veins:
- his oldest known ancestors were 19th Century disciples of Marx (both died of alcoholism) ;
- his grandfather belonged to the old vanguard of Bolsheviks, serving both Lenin and Stalin (killed in action in 1943) ;
- and his father blindly believed in lies spread by Khrushchev and Brezhnyev (which caused him to die in 1968).

As you see, none of his predecessors lived enough to pass away of old age. It won't be a mistake to say, that Volodya comes from family with socialist traditions, despite socialism opposes any tradition. xD

http://www.fanart-central.net/pictures/user/Saltwater/843486/Red-Malicious-Band
His paternal grandfather, a communist too , actually fought for the Red Army in the Polish–Soviet War of 1919–1921. (historical true facts :-) )

They fought in the same front, just never managed to cooperate due to mutual fractionism - ancestor of Red Miliband claimed that communism is only for humans, and Disgusting Ivan (paskudny means "disgusting" in Polish, Russian variant is paskudnyj) was unwilling to accept commands from "traitor of Marxism". :D

I think I get your joke - it has to combine Foul Hand, Malicious Red Band and clumsy canine from my pic as parts of wider spectrum* . xD

Speaking of foreign languages, I've had ideas for comics with rhymed text parts, but those would only be understood by Polish native speakers.


*We both know, that socialism is debilitating mental disorder, but let's use neutral-sounding terms for safety. ;)

At first sight Transfer from 80 Days Around the World with Willy Fogg came to my mind looking at him, and when I started to read the story, then I saw my guess was just that right ;) I wish a win on lottery having this luck :D
Anyway, I really like the story about Transfer and his late-relatives :) Unfortunately I know the exact date of Stalin's death since my brother likes to banter me with the fact it's on the same day when it's my name-day: 5th March...

Transfer's descendant inherited most of his traits, including pleasure in plotting against enemies, fanatical devotion to evil and lack of courtesy towards women - remember how did Transfer capture Princess Romy in Reykjavik in "Willy Fogg 2" ? His descendant behaves in the same way, when facing females beyond the Bolshevik party. Volodya's comrades are different story, since he fears those having higher rank than he does (from Major upwards). xD

His luck is that he can only rarely meet those higher-ranked females, as it's not usual in Russia, isn't it? :D

Yeah, but let's not forget about wives and lovers of higher-ranked officials from CPSU - despite they don't have direct power in their hands, their male partners do. xD

Yeah, it's not accidental why they say "there's always a woman behind every important man" XD

Volodya got such nose from drinking strong alcohol in large quantities and sniffing harmful stuff. xD

That's the charm of living in a country with totalitarian regime, where authorities intentionally attempt to destroy own people.

Our canine red infantryman is intentionally saying the same quote twice - above is Arial font text in Cyrillic, below in Garfield font is pronunciation in Latin alphabet.