Mona on Shakuras by TeeJay87 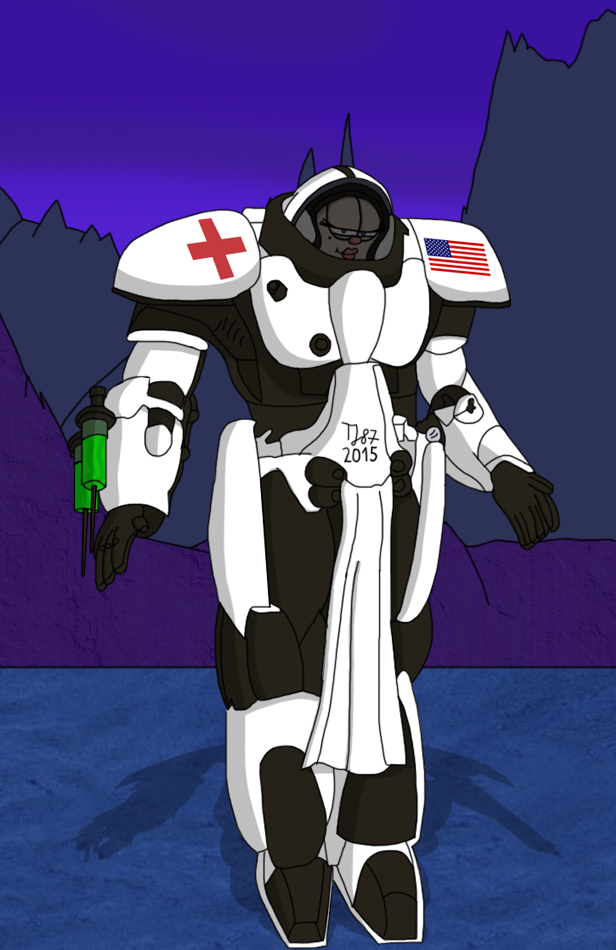 I tried to depict the landscape of the planet, as it looks in Brood War "desert planet with ebony rock, fixed in a state of perpetual twilight". Our spaced out Pussycat had to be resized, since she looked too big on this landscape.

It's merger between video game released by Blizzard Interactive ( StarCraft: Brood War ) and cartoon made by PAWS Inc. ( "Garfield and Friends" ).

Thanks, I've tried to depict the landscape similar to the one in StarCraft 1 http://vignette3.wikia.nocookie.net/starcraft/images/6/61/NewAntioch_SC1_Art1.jpg/revision/latest... with dunes of blue sand, hills formed of purple/blue rocks and gray-blue mountains.

Are they screenshots from the game?
They do not seem to provide the patterns....

That image of blue desert with Jupiter-like gas giant in the sky, bones of dinosaur (?) in the foreground and illuminated pillars in the background is loading scene from StarCraft 1: Episode IV ( Brood War Protoss campaign) - you see this before missions taking part on the planet Shakuras. If I remember correctly, you see those before missions 3, 7 and 8.

Tiles from galaxywiki.net must be coming from StarCraft II editor - I don't have the game myself, but I saw gameplay on YouTube and couple of missions do take part on planets with such backgrounds.

You have posted this link:

which is a cool gallery of references.
but i do not see the seamless patterns (tilable) on the wiki page.

OK, I understand now.  :-)
I have done some Internet searches, and I found that:

so this is the way they create the backgrounds...

Yes, that's how does it work in those games. ;)

I am not a gamer myself, so I had absolutely no idea of the context. ;-)
And I had not realized so far how difficult it was for you to grab some relevant materials for your artworks.

I am more than willing to help.
So if you want some specific patterns, please let me know.  :-)

I'm not considering myself as gamer, since I only like few series released before 2002 and I don't buy newer ones. Part of the reason is that most of those videogames are too expensive for me - I got my own copy of StarCraft 1 long after its release and it was indeed a bargain:
- original SC 1 used to cost at the day of releasing 160 PLN (32 GBP), Brood War expansion set - 90 PLN (18 GBP), it would be 50 GBP total;
- when I bought two-disc set (game with expansion set sold as one) in mid 2002, I paid 60 PLN ( 12 GBP) for both games;
- following logic of Blizzard Interactive, they will have to lower prices for StarCraft II someday - currently the 2 released parts Wings of Liberty ( Terrran campaign) and Heart of the Swarm (Zerg campaign) cost 32 GBP each, and there should also be available Legacy of the Void ( Protoss campaign) for the same price.
I prefer to wait, till they sell all 3 parts as one with lowered price instead of spending quite large amount of money on them separately.

Before we became friends, I had to make backgrounds for pictures by copying textures from photographs and slightly altering them in Photoshop. The same technique was used in the picture of Spaced Out Mona - I took sample from the texture of blue sand,resized it by about 150%, multiplied it and enhanced with stamp tool.

I appreciate your offer of help - when I need something, I'll notify you., ;)

Yes, you are right and wise.
If you wait, you will find a good bargain.

I had a thorough look at all the textures used in WarCraft.
Some interesting textures, indeed.
Some are present in most of the worlds, with minor variations.
Others are unique to a particular world.

I have already made six seamless patterns, in two sets.
Sent you the direct links. :D

It's actually combination of armor and space suit http://starcraft.wikia.com/wiki/CMC-405_light_combat_suit

This completed version looks awesome with the night-time landscape in the background :)

Thanks, though I have to admit I'm unsure if the picture looks convincing. Notice Mona is shaded as if it was day there, while the planet she landed on is known of "being fixed in state of perpetual twilight".

awesome^^ or in her case Pawsome^^

You may have noticed the original has bigger shoulder pads http://vignette4.wikia.nocookie.net/starcraft/images/c/cc/Medic_SC1_Art1.jpg/revision/latest?cb=2... , I've thought those would only limit Mona's line of sight, thus I lowered them.