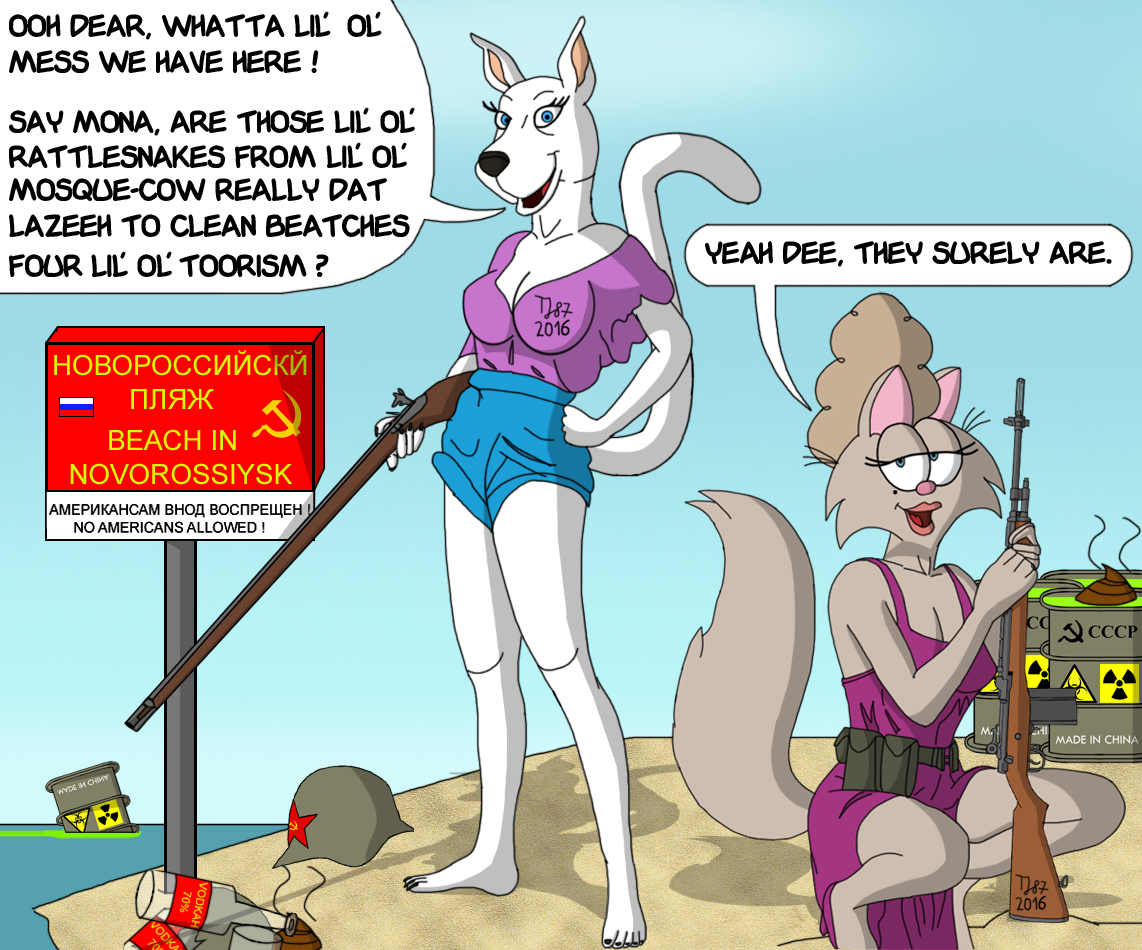 Here you can see our Southern Belle cradling her 18th century flintlock musket (remembering American Independence War) and complaining about the condition of (in)famous beach in Novorossiysk with its typical-for-Russian-standards pollution level. Naturally Dee isn't let alone herself - Mona is looking after her. Penny, Stan, Delilah and Ian are probably checking other parts of this landfill for tourists.


This picture is supposed to be showing differences in speech and dress code between dwellers of Dixie (former Confederate States of America) and Western parts of the USA (Texas, Nevada and Arizona), according to what I heard in movies and my pen friends from the USA. For those not familiar with American society - Dee is the Dixie, while Mona is supposed to be Texan.


I would like to thank my pen friends from the USA and UK, who checked prototype versions of this picture from grammar side. :)

Awesome! I really like Dee's redneckish speech :)
I'd thought Texas is also considered as part of Dixie states, as it was a member state of the CSA during the Civil War. Or maybe it's just because waving the war-time banner of CSA (which is badly considered as the flag of Dixie by many)  is so trendy there, as it represents "Southern Pride" as they say?

She speaks that way in "The Chiller Diller Movie Thriller", with voice almost exactly sounding like Penelope Pitsop from the same cartoon company. It's not a surprise - both Dee and Hanna-Barbera Penny are voiced by Janet Waldo. ;)

Texas was indeed part of Confederate States of America, though Texans were just minority of General Lee's army; many of them were fighting in Union's regiments. As far as I know American society, Texans are proud people, who don't identify themselves with "hicks" (dwellers of Georgia, Alabama, Tennessee, Kentucky, Louisiana, Arkansas and Mississippi); those latter are commonly considered as foolish people.

Even their regional accents differ from each other - Texan dialect is closer to literate American English, while the Southerners tend to mutilate it (remember how did Penelope Pitstop call for help ? She yelled "HAY-ULP !" - in Dixie manner). It's indeed difficult to spot those differences, though not impossible:

- some "Garfield and Friends" episodes have characters speaking the same dialect - notable characters are Cactus Jake, his relatives, Miss Kitty, Mona and Penelope in part of "The Guy of Her Dreams" about Wild West fantasy;

- while the Dixie dialect can be heard in most of Hanna-Barbera cartoons, especially those: Scooby-Doo series (Scooby Dum and Scooby Dee), "Wacky Races" and "The Perils of Penelope Pitstop" and "Hillbilly Bears";

LOL
I am pretty sure that Alla Manilova and Sergueï Korneïev would gladly offer you a job as to promote tourism in Russia!   ;-)

On the condition they provide Hazmat suits for tourists visiting their homeland. ;)

How anyone can think that you can just dump whatever you please anywhere and forget about without a care to the environment and its inhabitants is beyond me. After all, destroy the environment, destroy yourself. But of course, no one will start to care until it reaches the point of beyond repair which is truly a sad thing. Great work as you usually do TeeJay.

Most of environmental issues in Russia are results of irrational development policy, performed both by Moscovian Kremlin and regional administration.

This process began after 1905 revolution, when czar Nicolas II Romanov attempted to develop industry in his empire, though the Bolsheviks were those, who brought natural disasters to Russian wildlife with their "New Economics Policy" and "Five-Year Plans". Lenin and Stalin did achieve industrial development at cost of human casualties and crippled wildlife, to focus on the latter:

- certain species native to Siberia are close to extinction, notable example is Siberian tiger https://en.wikipedia.org/wiki/Siberian_tiger , which has traditionally been praised trophy for Russian poachers, https://upload.wikimedia.org/wikipedia/commons/4/4b/MSU_V2P2_-_Hunters_with_tigers.png

- speaking of poaching, it remains neglected issue in Russia https://en.wikipedia.org/wiki/Crime_in_Russia#Poaching

- their water supplies aren't in good condition as well https://en.wikipedia.org/wiki/Water_supply_and_sanitation_in_Russia ; possibly that's the reason they consume alcohol in large quantities (since it kills germs)

- Lake Baikal has been put into severe risk as well - https://upload.wikimedia.org/wikipedia/commons/0/0f/Bajkal&#039;sk_paper.jpg this paper mill in Baykalsk affects both the nearby lake and atmosphere around it, planned oil pipeline and nuclear plants will surely harm the local fauna https://en.wikipedia.org/wiki/Lake_Baikal#Environmental_concerns


- The Chernobyl disaster of 1986 didn't teach Russians much, they still build nuclear power plants with unstable energy cores close to river and human settlements https://upload.wikimedia.org/wikipedia/commons/1/19/Novovoronezhskaya_Nuclear_Power_Plant.jpg . I'd prefer not to imagine, how would this landscape from photo look, if something went wrong inside that power plant and reactors went off...