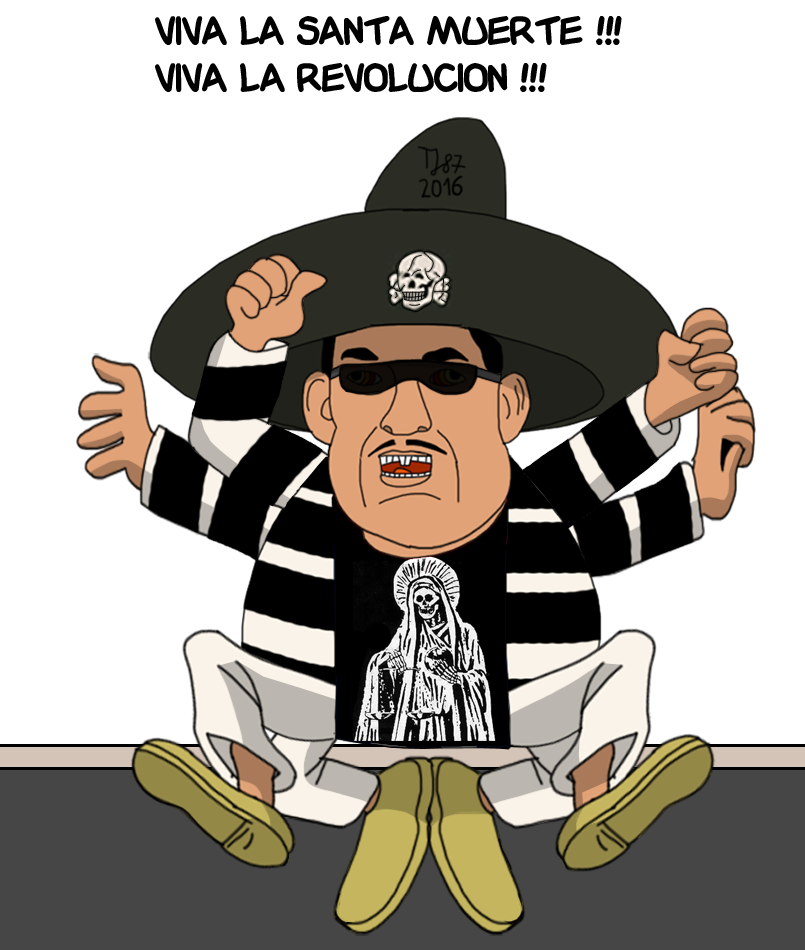 Despite being Christian nation, Mexicans have experienced religious crisis at least twice:

- less than 100 years ago, there was Christeiros uprising, caused by Mexican socialists harassing good religious people;

- nowadays, the same Mexicans are having severe issues with Santa Muerte cult https://en.wikipedia.org/wiki/Santa_Muerte , which somehow reached the United States and it's possibly advancing further.


Reading the article about the death cult mentioned above is proving, that Santa Muerte is religion of Mexican and American leftists - the part about patronage does include natural cannon fodder for disciples of Marx, Trotsky, Stalin and similar monsters known for their despise of human live.

Myself, I have never understood, how can sane people worship end of human life.

Sure, fear before death was the main reason for ancient people making up their deities (notable examples are Ancient Egyptians, Greeks and Romans), since they hoped to find solace after Earth life; Judaism, Christianity and Islam also offer post-humous rewards for mortal life following their principles, as well as Hinduism and Buddhism do. But worshiping the power causing life to end sounds is simply foolish - just like someone, who congratulates a burglar of robbing his/her house.

Even Gary Cygax and the rest of Dungeons and Dragons team knew, that death cults are wicked ones - in every D&D system, you can find such worshipers of death ( Myrkulites in Forgotten Realms, Nerullites in Greyhawk, Chemoshootes in Dragonlance and so on), who always have evil alignment without exceptions. Santa Muerte cult is apparently matching the evil scheme, since its members are known of their criminal activities in Northern America.

Our Cultist of Socialist Death is dressed in criminal outfit, supplemented with black sombrero (notice Totenkopf emblem) and matching poncho. The skeletal figure on his poncho is Santa Muerte - the wicked caricature of Saint Mary the Mother of God. I've intentionally drawn him sunglasses to make him look more like bad guy.


The depicted cultist is not supposed to resemble anyone particular. His resemblance to living people is not intended.

On the religious level, such a cult is something totally disgusting and sacrilegious.
And viewed from a profane perspective, this cult looks really insane, creepy and potentially dangerous.

And the worst is, that this cult has apparently been made for leftists. According to https://en.wikipedia.org/wiki/Santa_Muerte , this deity is patronising radical LGBTs, poor people from societal margin, smugglers, drug dealers and prostitutes - they all are nothing, but socialist revolution fodder.

This would explain, why did Karl Marx value Mexicans such low - their religious beliefs don't match Marxist principle about religion being forbidden opium for people.

Yes, I have read this.
This cult is for the dregs of society;
a wicked cult for the criminals, the deviants, the misfits, the retarded, the disturbed....

Since it managed to reach the United States, it can't be excluded this cult is spreading further.

With such popularity in Mexico and in the USA, Santa Muerte would easily find appreciation inside Canadian and European leftist societies. Unless it already has chapters there...

I had known that the Santa Muerte cult is originated from Aztec religion, but I didn't know that can be related to LGBT and leftist movements.
I had thought that is a kind of a satanic cult, hence most of its followers are criminals and other members of the Mexican underworld.

Indeed, it does sound unbelievable, that a cult derived from Aztec beliefs would accept people known for their rejection of divine being concepts.

But since both the SM cult, radical LGBT and leftists build their value systems on nihilism and despise of human life, all of them have enough in common to merge with each other. Especially since followers of those aforesaid ideologies are (in)famous of contradicting themselves in public and praising criminal activities as "revolution against bourgeoisie capitalism" they oppose with efforts worth better cause.