Catfight: Paratrooper against Chekist by TeeJay87 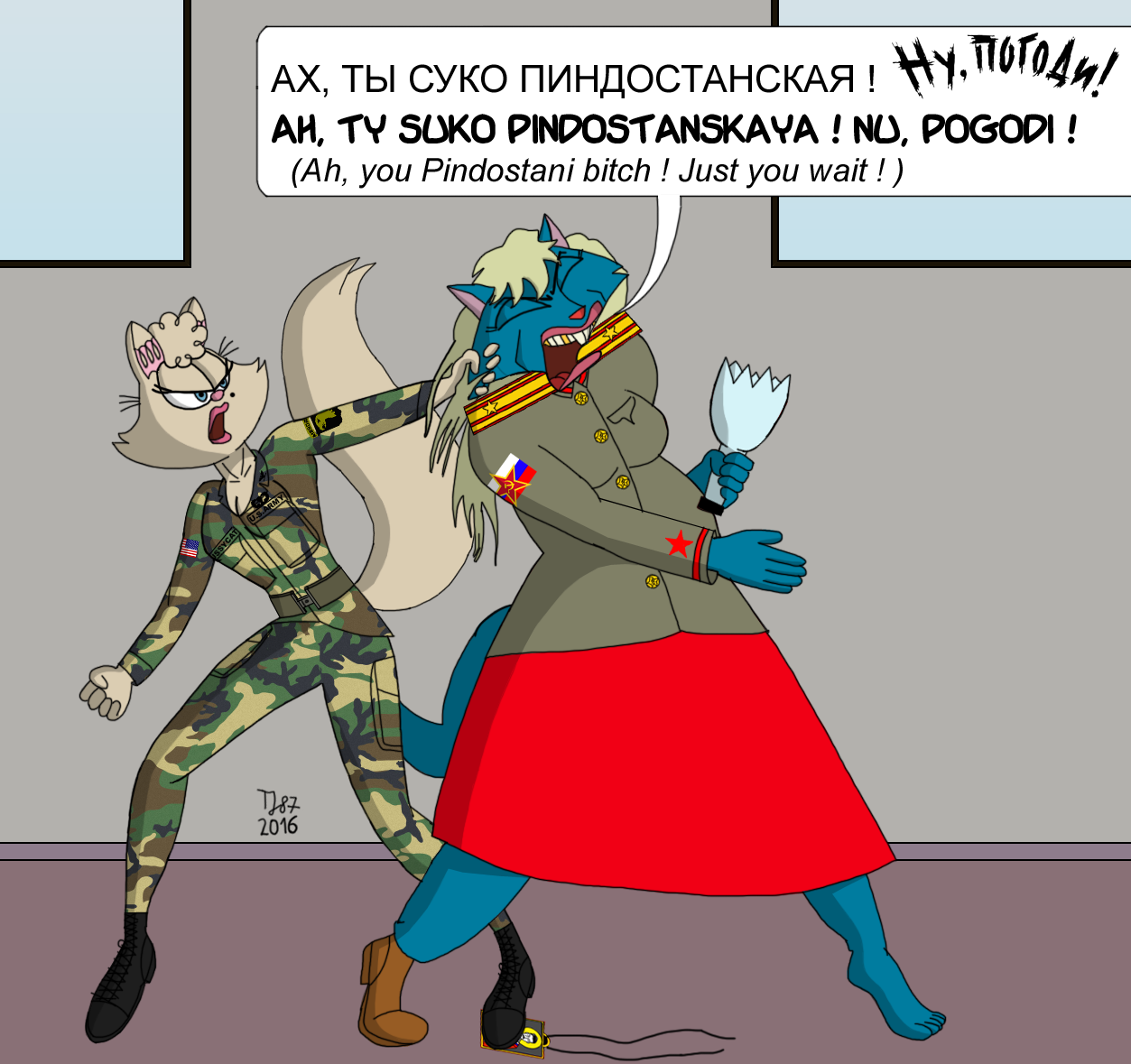 - Penelope in her US Army 101st Airborne Division with Colonel rank insignia;

- Olga in fatigues she calls "service uniform" - her KGB jacket with Major rank insignia worn to red dress and incomplete pair of shoes.


Feline KGB commissar lost her medals and another shoe during combat with "filthy decadent bourgeoisie American capitalists from NATO".


For those interested - "Pindostan" is rude name Russians use to call the United States of America. I agree, it sounds disgusting, but I haven't made it up myself, 95% of Russians indeed would benefit from savoir-vivre classes.

Olga Salotchkinaya belongs to me.

Thanks - there are also follow-ups of the series:

nice depiction of the uniforms. :-)

Which also shows two different theories for uniform development:
- since the beginnings of their regular army, Russians have always been designing uniforms allowing to distinguish officers from lower-ranked soldiers at first sight, even from further distances, following simple rule "the higher rank, the greater amount of decorations should the rank's uniform have". It's good strategy for peace time and parades, but wearing golden-threaded rank insignia and characteristic colourful hats in the battlefield easily attracts attention of snipers. Bolshocks often lost their officers in WW2 and Afghanistan due to their exposed uniforms, making them perfect targets for enemies, especially since both the Germans and Mujaheedins had plenty of decent scoped rifles, allowing them to take down popov from range of 2000 miles;
- while Americans focused on making the diversity between officers, NCOs and GI as difficult as possible - first they developed single fashions for all-rank field uniforms, then issued light Winchester M1/M1A1/M1A2 0.30 carbines in WW2 https://en.wikipedia.org/wiki/M1_carbine making it staple weapon for NCOs and officers up to colonel rank and since the end of Vietnam War, they started to use miniaturized embroidered rank insignia on field uniforms - as a result, it's difficult to distinguish mere GIs from their NCOs and officers without close examination of their uniform details. The same wise trend has reached the rest of NATO armies.

The picture above is model illustration of those two opposite views - Olga can easily be identified as commander after those huge rank insignia on shoulders, and as Chekist after red stars worn on sleeves. As for Penny, it requires closer examination to see her O-6 rank insignia worn on collar and parachutist badge above the formation tab. ;)

This version is great too, as it is set in a more realistic world :D

The uniforms worn by Penny and Olga indicate, that this issue may be happening between 1978 (when BDU pattern was introduced) and nowadays (since those uniforms are fairly available, even with insignia applied).