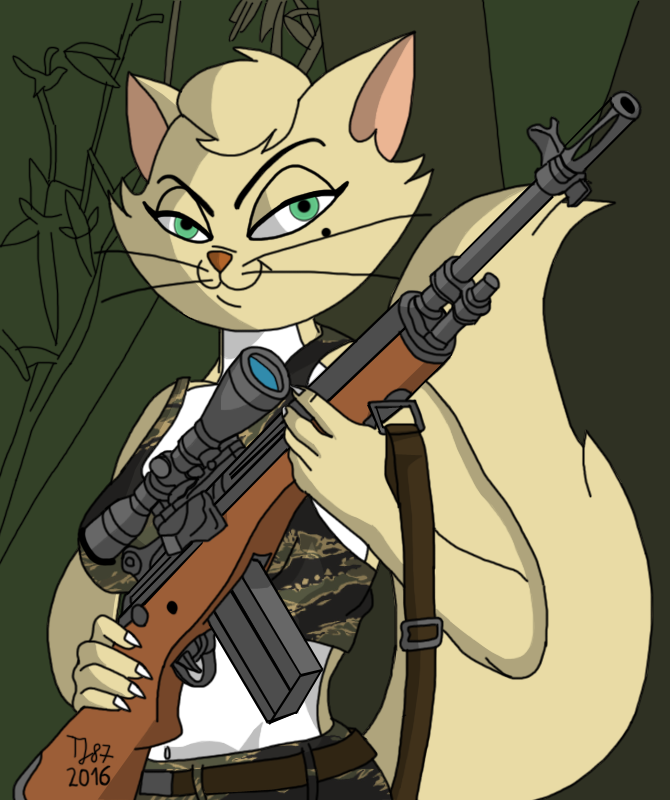 Title of the picture is pun of term "green hell" used to describe jungle as warfare area ( common especially about WW2 in Pacific and Vietnam War) and song from Duck Dodgers https://www.youtube.com/watch?v=SYv8UJ_-IOY . Both outer space and tropical forests are known as hostile environments for those, who don't secure themselves against threats found there.


Jungle in the former French Indochina especially deserved its bad reputation, partially due to humidity, heat and dangerous animals, with Viet Cong guerillas and North Vietnamese Army as model examples. The way followers of Ho Chi Minh were dealing with their opponents was comparable to modus operandi showed by Imperial Japanese Army, NKVD and SS Einsatztruppen, since thralls of Hanoi regime had no brakes in murdering helpless kids and women. Despite movies silence VC and NVA war crimes, testimonies about their cruelty can be read in some books I recommend:

- "Platoon" by Dale A. Dye (movie with Wilhelm Dafoe made after the novel can't be compared to the book);

- Novels written by Cat Branigan from series "Wings over Vietnam".


One could say, that henchmen of "Uncle Ho" and "Aunt Giap" were devils of the Vietnamese jungle. A contrario, their opponents should be classified as good guys; issues like My Lai massacre were caused by NVA barbarism. Especially since culprit of My Lai, Lt. Calley, had fair trial in the United States and got penalty matching the crime he committed.


Thus the portrait of Delilah with M21 rifle and Tiger Stripes pattern got such title.

Awesome indeed! I really like the pose and the M21 rifle :)

very well done and the title and description give it meaningful context. good job.

Thanks - from what I've heard and seen in various websites, the Vietnam War is still causing controversies in certain societal circles, despite it came to an end in 1973 with Paris Treaties.

Rabid leftists ( Carlos Latuff and Howard Zinn are model examples ) have pleasure in falsification of that conflict's history, mainly by exaggerating single acts of war crimes perpetrated by US Armed Forces combined with silencing those committed by Viet Cong (VC) and North Vietnamese Army (NVA). They call the war "capitalist invasion from nowhere performed by the United States upon Vietnam in 1965 - as if they refused to remember about presence of Military Advisory Command in Vietnam (MACV) https://en.wikipedia.org/wiki/Military_Assistance_Command,_Vietnam dating back since 1960s and organized into MACV in 1962, when Dwight Eisenhower and JFK deployed military advisors on the URGENT request of South Vietnamese government in Saigon.
Not to mention the Tonkin Bay incident of 1964 https://en.wikipedia.org/wiki/Gulf_of_Tonkin_incident , when USS Maddox was attacked by four Northern Vietnamese patrol boats and communist regime in Hanoi did confess, that such act of piracy was carried out by purpose. Purpose of "fighting the bourgeoisie capitalism".

Apart from the silenced background of the Vietnam War, "grunts" (US Army soldiers) and "leathernecks" (US Marines) did have tough service conditions in local jungle. Heat, humidity, insects and poisonous snakes were less-bothersome part of the campaign, henchmen of Ho Chi Minh refused to participate in open battles, instead, they fought like thieves:

- https://en.wikipedia.org/wiki/Punji_stick their favorite trap placed in the jungle;

- https://en.wikipedia.org/wiki/NLF_and_PAVN_battle_tactics#Offensive_tactics more about their tactics.


The main reason, that thugs of "Uncle Ho" got fine for themselves peace conditions in 1973 and full triumph in 1975 was that their opponents weren't accustomed to guerilla warfare. Pentagon prepared US Army and US Marine Corps to clash with Warsaw Pact on typical battlefield with visible frontline, none of the MACV commanders predicted, that the war they were involved in between 1965 and 1973 would look more like mafia conflict in the jungle than classic combat they were taught at West Point. General Westmoreland had good opportunities to weaken Viet Minh by direct attack on Hanoi in 1966 and 1967, when VC was weakened and NVA was gathering soldiers, but he preferred to allow them rebuilding power.