Champion of the Chapter

Champion of the Chapter

Champion of the Chapter by TeeJay87 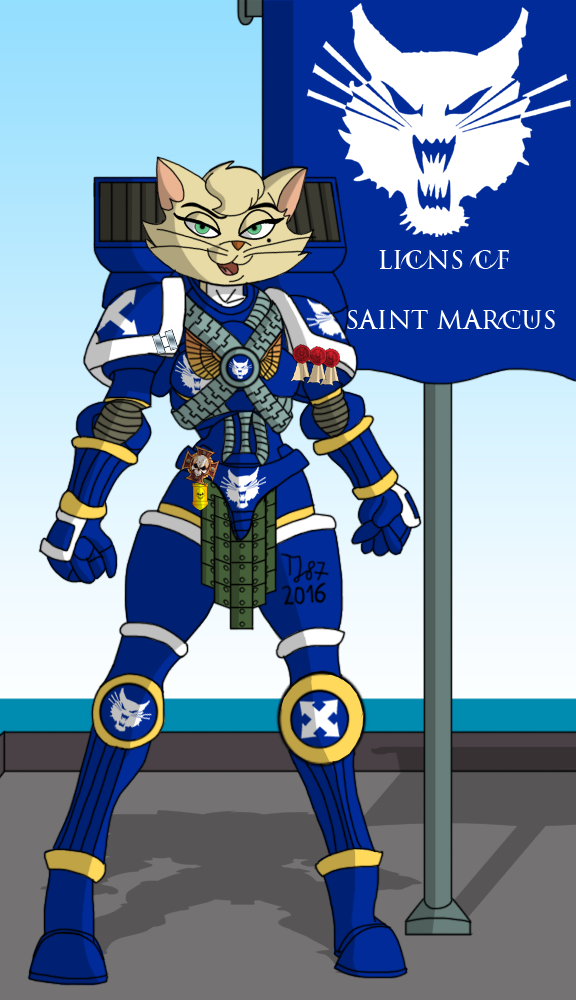 Lions of Saint Marcus are Loyalist Space Marines chapter composed of Felinians - native inhabitants of Felinian System, located on the opposite side of the Milky Way. Their home is called Planet Fellini - world almost identical to Earth, except of differently formed continents. Felinians also control the following planets:

- Litterion - dead world used as penal colony for their criminals.


Felinian Space Marines are known in the whole Empire for their outstanding performance against Chaos troops, particularly from listed below chapters:

- Drunk Cadavers (CaliGhoulas sent to outer space, where they multiplied in unknown world)

- Swords of Jihad (terrorists from ISIS/Al-Quaeeda/Hamas/Al-Fatah, also banned from Earth and settled in the Planet Zulfiqar)

- Fists of Solanas (various left-wing brigands, who were also banned from Earth and found own home world).


Unlike most of Loyalist chapters, Lions of Saint Marcus retained full rank system from Private to Colonel rank, except that colonels are called in their army "chapter captains", while majors are "battalion captains". Standard O3s are "company captains" inside the chapter - they lead companies in combat, each company formed from 4 or 5 platoons (30 troops) lead by lieutenant. Four or five companies form battalion, while the 10 battalions with leaders make the chapter. Both genders are allowed to serve and fight for the emperor, though only command squads may have soldiers with mixed genders.

- more details on her armour;

- standard of Lions of Saint Marcus - the chapter Delilah belongs to.


Details of Delilah's armour include:

- 1 Marksman Honor - for accuracy of firearm and laser attacks;

- 1 Crux Terminatus - for killing at least 5 enemies in single battle. Delilah has been awarded with it for the Battle of Planet Dorkon, where she killed in combat one Vodka Inhaler, one Nu-Pogodi Berserker, one Sword of Jihad, two Drunk Cadavers and two Fists of Solanas.


Being Assault Company Captain, Delilah should be wielding chain sword and plasma pistol - while posing near the banner, she's holding those weapons hidden behind her armor. Most probably in a shelter beneath her jet pack.

Awesome story and details, I especially like the badges :)

Thanks - those are from Warhammer 40K:

Mona, Delilah and all other Felines must have worked their asses off to earn their rights to be exempted from the Imperium's brutal policies against the non-human entities but also fight and die for the God Emperor. They are also at top positions. That's very admirable.
Excellent job on the design of the Feline Space Marines' flag. :D

Lions of Saint Marcus have been formed to relieve top-notch chapters, such as Ultramarines, Blood Angels, Dark Angels or Raven Guard from dealing with less-worthy foes of the Emperor composed of Leftist Chaos Legions (LCL) - Space SJWs, Space Jihadists and other rabid fans of leftism, as well as heretics like those http://i2.kym-cdn.com/photos/images/newsfeed/000/570/972/ff6.jpg

Anyway, I'm aware that cats in Space Marine armors contradict Games Workshop canon, still, I find them making more sense than such "MLP 40K" https://www.google.pl/search?q=my+little+pony+warhammer+40k&biw=1920&bih=969&tbm=isch&tbo=u&sourc... or aforesaid Hello Kitty. And if you add lousy Chaos troops formed from SJWs, leftists, Jihadists and similar dregs of society as enemies of the feline chapter, you get sophisticated parody of corrupted Western culture. ;)

It's not a coincidence I've picked such palette - apart from reference mentioned above, top-notch heroes of Warhammer 40K canon wear similar armours https://pbs.twimg.com/media/B-AP5ZaIMAArzk1.jpg:large

she came out great, really nice armor it suits her well. I like how you had her pose by the banner

Thought the banner would make the picture look less empty.

yup it was a great addition to the picture.

Compare Delilah with her colleague from Heavy Weapons Squad http://www.fanart-central.net/pictures/user/TeeJay87/850640/Cat-phracta-Mona-mild-version

Similar pieces of protection can be seen in Warhammer 40K and some other sci-fi games.

Mm, I like her armor design here - looks fancy and lethal at the same time, great color contrast, and combat-practical protection.

I've got idea for such armor after checking articles about Warhammer 40 000 - it's a merger of three concepts: