Penny for Penny's Thoughts by TeeJay87 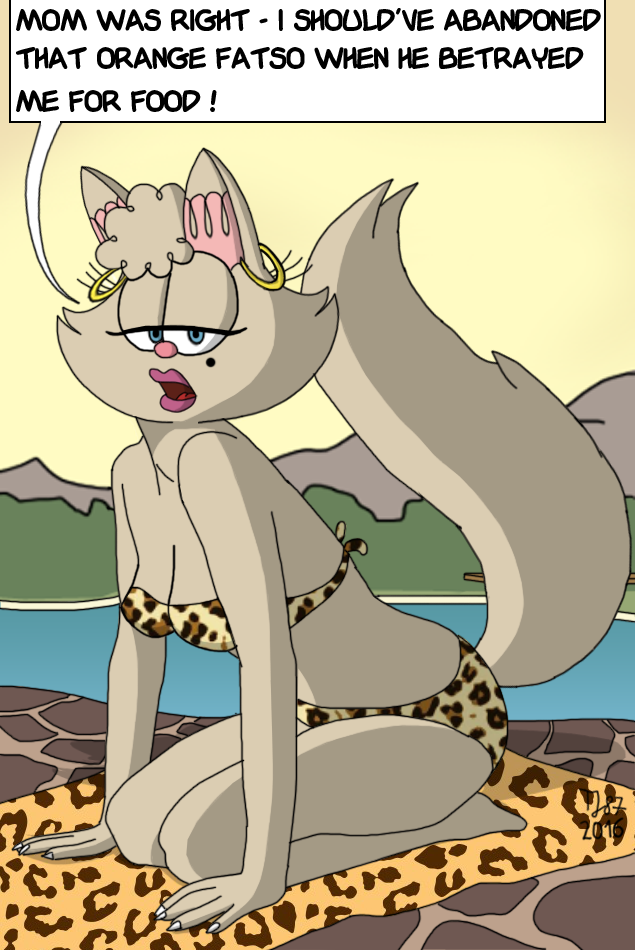 Remake of a picture inspired by http://orig14.deviantart.net/09af/f/2014/035/a/4/the_naked_i_cover_art_by_peterpulp-d7554tc.jpg I drew in 2014 and had to delete during gallery clean-up. Since the 2014 version wasn't that good quality (Penelope was badly shaded, could've had better face expression and the picture was tiny sized), I've decided to replace it with better-quality version.


For those, who are wondering about Penny's quote - Garfield has never been treating Penny well in relationship:

- he was initially unwilling to date her http://garfield.wikia.com/wiki/Perils_of_Penelope

- he betrayed her with another cat http://garfield.wikia.com/wiki/The_Second_Penelope_Episode

- not to mention the idea of marrying Penny scared him off http://garfield.wikia.com/wiki/The_Third_Penelope_Episode , as well as Penny's mother, who is (quite justly) shown not being fond of Garfield as son-in-law


Personally, I'm not amazed this couple isn't popular inside Garfield fandom - majority (including me) agrees, that Arlene makes better choice for Garfield's second half.


Still, I've never understood, why do certain fans of PAWS Inc. franchise blindly hate Penelope with passion worth better cause - negative feedback (easy to find on dA) varies from calling Penny "doormat" (because she's not treating Garfield as roughly as Arlene does) to even sillier demonstrations of immaturity. Notable example is one Swedish Muslim from Garfield Wiki, who apparently hates Penelope just because she looks like demon from Quran - blonde female with blue eyes. Weird he's not hating Mona from the same cartoon and Penelope Pitstop from Hanna-Barbera TV shows, who also match the synopsis.


This whole idea of comparing Penelope with Arlene doesn't have sense, since those two kitties are two different types of females - if Arleen had leftist beliefs, she'd have made model example of radical feminist with her tomboyish conduct; while Penny behaves as it can be expected from a lady. Funny that those of Penelope haters I've seen on dA are without exceptions advocates of radical left-wing, who oppose traditional values Penny can be considered symbol of.

Nice picture.
The bath towel that Penny is using could be made of Garfield's skin!  LOL

It's quite possible that Penelope shaved Garfield with her bare claws after they finally split up....

Even if the incident was painful, both parties got profit nonetheless - Penny got her revenge and material for new towel, while Garfield finally lost some pounds ! xD

For the first time, Penny got the eyeliner Delilah usually wears. :)

Great pic and pose!
But indeed, Arlene takes Garfield's uninterest towards her with less pique than Penny.
Anyway, I have always wondered why she was missed from Garfield and Friends while she had been Garfield's main female friend since her introduction in 1980.
Was there a plan to retire Arlene in the comics as well upon the success of Penny's character, but failed for some reason?

The most convincing theory claims, that PAWS Inc. writers were having a hard time writing Arlene for cartoon. Jim Davis had his own reservations on Arlene, not wanting the character used if they were unable to portray her the way he wanted. As a result, Penelope was made in Seasons 5, 6 and 7. My pen friends from Garfield Wiki are said to have this discussed with Mark Evanier himself http://garfield.wikia.com/wiki/Penelope_Pussycat .


PAWS Inc. canon (comics from 1980s are best proofs) firmly states, that Garfield is primarily focused on himself, food, Pooky and Arlene - in such order. The Garfield Show sticks to this canon firmly - it's shown that Arlene cares more about the relationship than Garfield would do.