Team Pussycat: Heroes of the Tempest mild version by TeeJay87 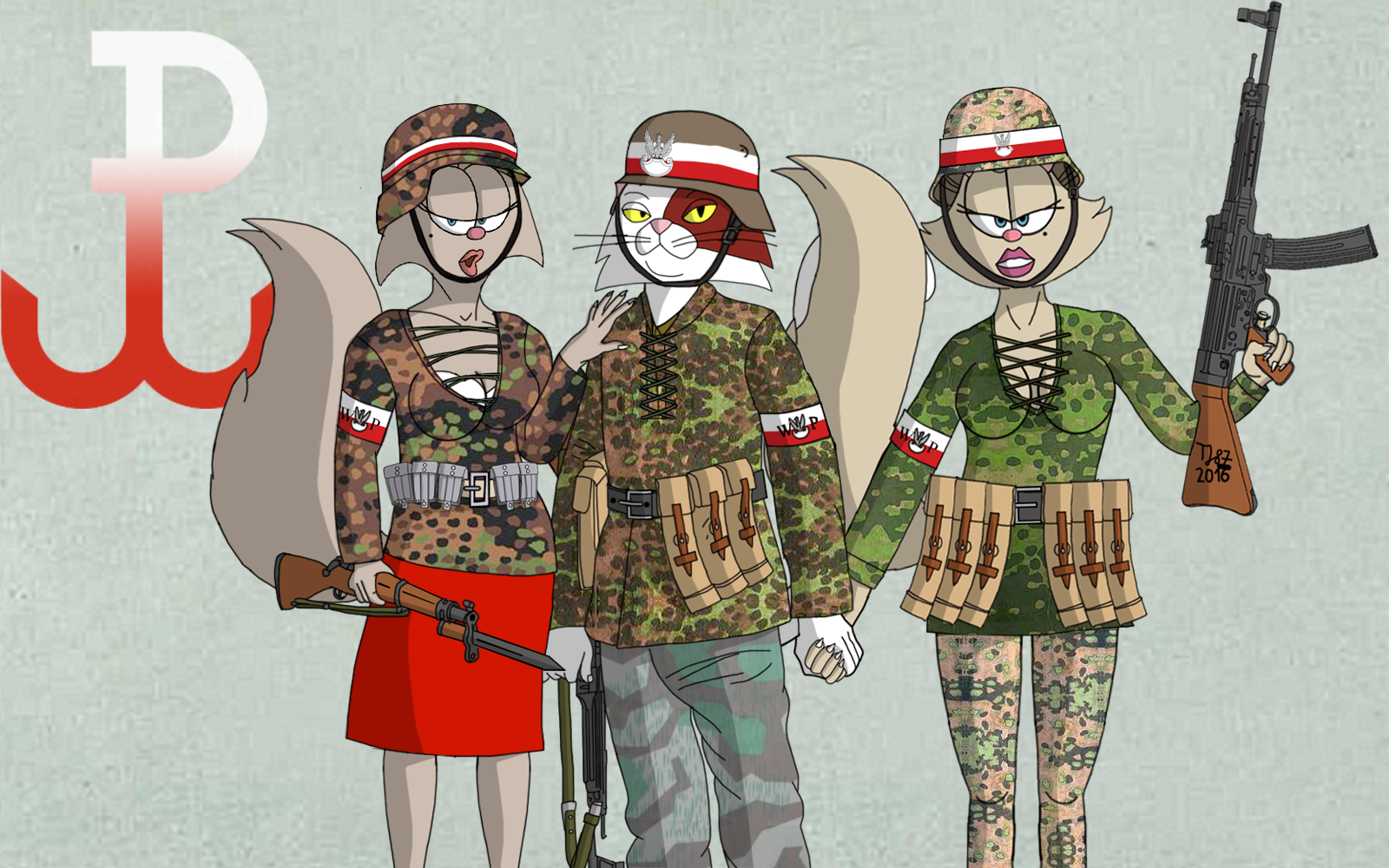 
That white-and-red anchor on wall behind our feline insurgents is symbol of the Fighting Poland and our Underground State 1939-1945 https://en.wikipedia.org/wiki/Polish_Underground_State . Background is supposed to look that simple - Warsovians have deserved reputation inside the rest of Poles as primitive people without taste. The title refers to operation performed by the Home Army https://en.wikipedia.org/wiki/Operation_Tempest


Mona and Penelope Pussycat belong to PAWS Inc.
Stanisław Zaleski belongs to me.

I've been planning to depict those German WW2 camouflage uniforms without drawing troops from Wehrmacht or SS.

It's not impossible, since our legitimate resistance members did wear those, especially between 1944 and 1947 (as in links), I've heard that Czechoslovak resistance also had similar taste of fashion like Home Army did, while French Maquis or "Russian WW2 resistance", since members of those formations are always shown wearing civilian uniforms.

As for weapons, those Sturmgewehr 44 wielded by Stan and Penny are quite tricky to depict - their basic shape is similar to AK47 (Kalashnikov had to rip off "his famous gun*" from somewhere), just the details cause some trouble.

* It sounds ironical, especially since Misha (Mikhail Kalashnikov) developed prototype of AK47 in the times of deep Stalinism, where private property was purged by Chekists. It's quite a hypocrisy, that Bolshock gun constructors did name their means of "spreading socialism" with their names, don't you think ? Marx would call it self-privileging ! xD
Some examples are below:
- Tokaryev TT-33 (handgun)
- Simonov (rifles)
- Dyegtaryev (LMGs)
- Goryunov (HMG)
- Nudelman-Suranov (37mm autocannon used in aircraft, especially MiG-15 and Su-7 )

Penny looks most fierce of the trio. ;)

The completed version looks awesome with the  anchor-symbol in the background :)

That anchor is symbol of Fighting Poland in WW2 https://en.wikipedia.org/wiki/Kotwica

Nice illustration with the trio!

Hope it's visible, that those three aren't die Katzengrenadier* ?