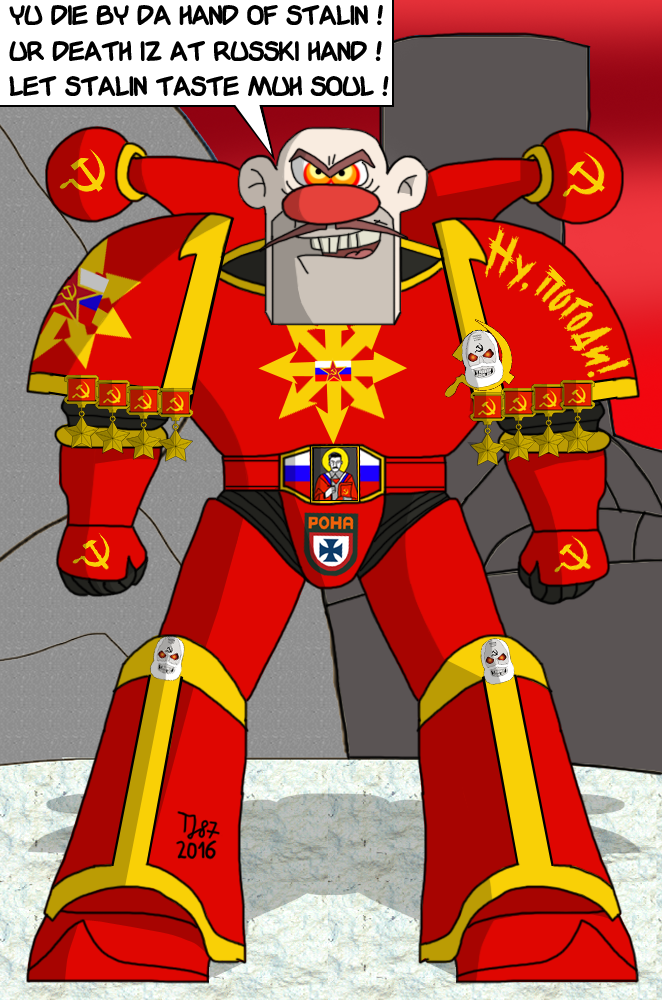 Vodka Inhalers are Chaos Space Legion composed mostly from Russian communists, who had been banned from Earth somewhere in the 24th Century for their disgusting deeds they have been performing against humanity since 1917. After long drift through the Milky Way, their ships crashed on frozen planet lightened by one of red supegiants https://en.wikipedia.org/wiki/Red_supergiant . The Moscovian refugees called their new home "Planet Bolshevia" and spread there like plague. Within less than one century, formerly uninhabited planet became one huge GULAG world and threat to every civilization within range of the Space Red Fleet...


Vodka Inhalers are organized in similar way like loyalist Space Marines, with some exceptions:

- award system reflect their beliefs - instead of purity seals, they reward recipients with Heroes of the Soviet Union Stars; Crux Terminatii is replaced with Skull of Marx, often granted for various merit in combat;

- instead of protecting humanity, Vodka Inhalers attempt to cast communist revolution in the entire galaxy.

Due to Marxist-Leninist-Stalinist ideology Bolshevians worship with efforts worth better cause, huge parts of their home world had been turned either to food farms (relying on slave labour from people caught by Vodka Inhalers in the outer space), or to production centers, where weaponry is manufactured. Just like their Earth descendants, Bolshevians are fond of ripping off weapons from their enemies, naturally adapted for mass production.

Our thrall of socialist evil is standing on surface of his home world Bolshevia, threatening "filthy capitalists and Polackeys*" that messing with him will be bad idea. Bad indeed, but for Doltie - he's not a worthy opponent for our feline mighty heroines due to weaker armor (made in Bolshevia) and inferior combat skills (what could you expect from a silly drunkard ?).

For those, who are wondering, what Doltie is trying to say - he drank too much vodka again, so he's repeating quotes from Chaos Gate in English he was taught in New Musk-Cow.


*Polackeys - Russian hatred towards us, Poles, deserves to be called "legendary" - they've been loathing us since at least 1587, when their czar Ivan IV the Terrible failed to conquer us. This sentiment has been lasting for the following 430 years and it's mostly based on Great-Rus imperialism mixed with jealousy.

I'm planning to refresh his design a bit http://www.fanart-central.net/pictures/user/TeeJay87/852282/Space-Dolt-2017-raw-sketch

Very eye-catching image!
The palette of colours used fits perfectly the theme.
Doltie belongs to the bolshock chaos legion:
they are rabid commies and blood-thirsty looters.
Red is the colour!
Crime is the game!


I was inspired by chaos chapter from official Warhammer canon http://warhammer40k.wikia.com/wiki/Khornate_Berzerkers ,whose members do behave like red infantrymen after drinking tremendous amounts of booze. xD

Doltie has gone really evil :)
Anyway, Gretel Grosse from Wolfenstein 3D has just came to my mind because of the pose and the armor.
Fortunately Dolt doesn't have two chainguns in his hands, and some bottles of vodka wouldn't even help him to look dangerous at all :D

One could say he's becoming demon of leftism. ;)

Games Workshop developed Warhammer 40K at the same time Wolfenstein 3D was created, thus it may explain similarities between their armours.

The red armor is combining with the character of the bad guy!

He's only missing helmet with ram horns, like those wear: