Where the heck is Riff Raff ?

Where the heck is Riff Raff ?

Where the heck is Riff Raff ? by TeeJay87 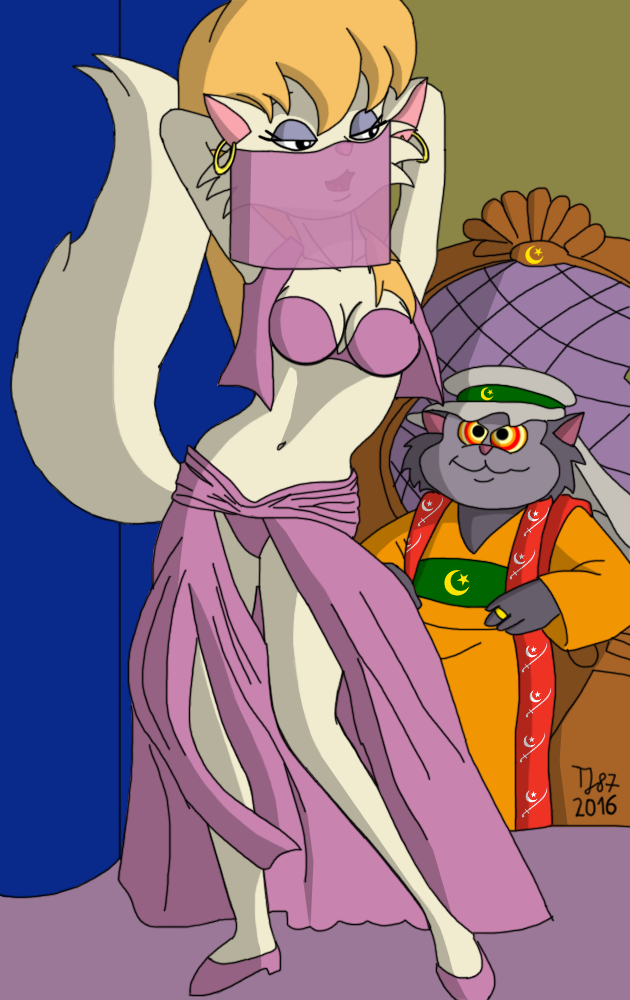 Heathcliff and the Catillac Cats is one of those cartoons I've grown up on - our private TV made outstanding dubbing, much better than Polsat did with "translating" Garfield and Friends into my mother tongue.


One of my favourite episodes of the previous is "Harem Cat" from Catillac Cats segment - apart from frequent appearance of Cleo http://heathcliff.wikia.com/wiki/Cleo and Riff Raff, this 10 minute cartoon from early 1980s shows the true face of advancing islamization. You can watch the episode on YouTube https://www.youtube.com/watch?v=WNZKau8Heb0 in quite decent quality.


The picture posted above is my vision of scene, where Cleo is held on Sheik's plane with Sheik's cat Orville (Omar in Polish dub), who has just told our catalisque*-to-be, that she is about to become his 21st wife. Riff Raff and his gang are just about to enter and save Cleo from living inside society, where women are nothing but objects.


I've allowed myself to modify Orville/Omar to underline his Middle-Eastern traits - instead of bluish parts of his outfit, he wears green belts with Osman crescent on belly and kaffiyeh**, supplemented by red straps on Galabiya*** with symbols of Zulfiqar**** (sword of Muhammad) printed. Our catty caliph (LOL) has either taken hashish***** (drug praised by Mahdist movement, Hamas, Al-Fatah, Al-Quaeeda and ISIS) or "Harem Delight"***** (opium with sweet syrup) as described in the novel "Aviary Gate" by Tracy Hickman. Or perhaps our feline paddy-shah took both and mixed them with Palestinian arak*****.


Let this picture be a gift to my pen friend Dumas. :)

**Kaffiyeh = Middle-Eastern headgear composed of cloth with strap holding it on forehead, originally used by Jews and adopted by Arabs.

***Galabiya = traditional robe worn by men in Saudi Arabia and other Arab countries.

****Actually, Zulfiquar is a scimitar (sword with curved blade), said to be personal weapon of prophet Muhammad. Muslims also call this weapon "saif an-Islam", "sword of Islam", which is supposed to represent "the peaceful nature of Islam".

Excellent scene!  :D
In arab countries, the man walks first, then the camel(s), and at the rear of this pitiful caravan come the wives.
arab hierarchy in a peanut shell!  LOL

We have a joke about such hierarchy:

Arab man is riding a camel through a desert; behind him, a woman dressed in their traditional "garbage bag suit" is trying to catch them up while running. A tourist stops them and asks:
- What's going on here ?
Arab guy:
- My wife is sick, I'm taking her to a doctor.

There's also a joke about their stance towards Jews, Christians and others not matching their dreamed "world-wide caliphate" :


Mahmoud Abbas (leader of Hamas and Al-Fatah I depicted here http://www.fanart-central.net/pictures/user/TeeJay87/850515/Mayhem-in-Jihadistani-Tavern) once asked an imam, if there's a way to make Jews and Christians abandon Jerusalem and hand over Israel territory to moslems. Imam replied:
- There are two ways of making Jerusalem free from infidels: realistic one and miraculous one.
Abbas:
- What's the realistic one ?
Imam:
- All the Muslims around the world have to gather in Mecca around Al-Kaaba temple and pray, till Allah sends angel of vengeance, who will make those infidels leave Jerusalem in the name of Allah.
Abbas:
- So... What's the miraculous way then ?
Imam:
- That infidels do us favour and abandon Jerusalem from their own will !

eh eh!  Great joke!
I did not know either of them;
and I will gladly add them to my repertoire of muzz jokes.  ;-)
Many thanks for sharing these jewels of humour.   :D

Cleo is experiencing "Muslim chivalry" on her own fur. ;)

Nice! The kitten is just mesmerized!

You're not familiar with Heathcliff and the Catillac Cats, are you ?

In fact not only know them by your drawings!

Seems the cartoon hasn't been popular in Portugal and Brazil , since the article lacks information https://pt.wikipedia.org/wiki/Heathcliff_and_the_Cattilac_Cats ; better sources are here https://en.wikipedia.org/wiki/The_Catillac_Cats (main info) and here https://www.youtube.com/watch?v=WNZKau8Heb0 (the episode I used as reference for picture).

Awesome scenery!
It is also good to see a Catillac Cats fanart, even I prefered Heathcliff segments more from the show.
Anyway the whole series has just recently been dubbed in my mother tongue, and since then, channel M2 reruns it from time to time.

I based the background on the original from cartoon, with couple of Levantine details added.

As for Hungarian dub, I've just found out details about it https://hu.wikipedia.org/wiki/Heathcliff_%E2%80%93_A_csacska_macska :
- Wordsworth got name matching his I/Q in your dub xD
- knowing Hungarian grammar, it's strange Sonja's name isn't written "Szonja" , unless her name in the dub is pronunciated "shonya".,