How to Impress a Southern Lass

Home » TeeJay87 » Pictures » How to Impress a Southern Lass

How to Impress a Southern Lass

How to Impress a Southern Lass by TeeJay87 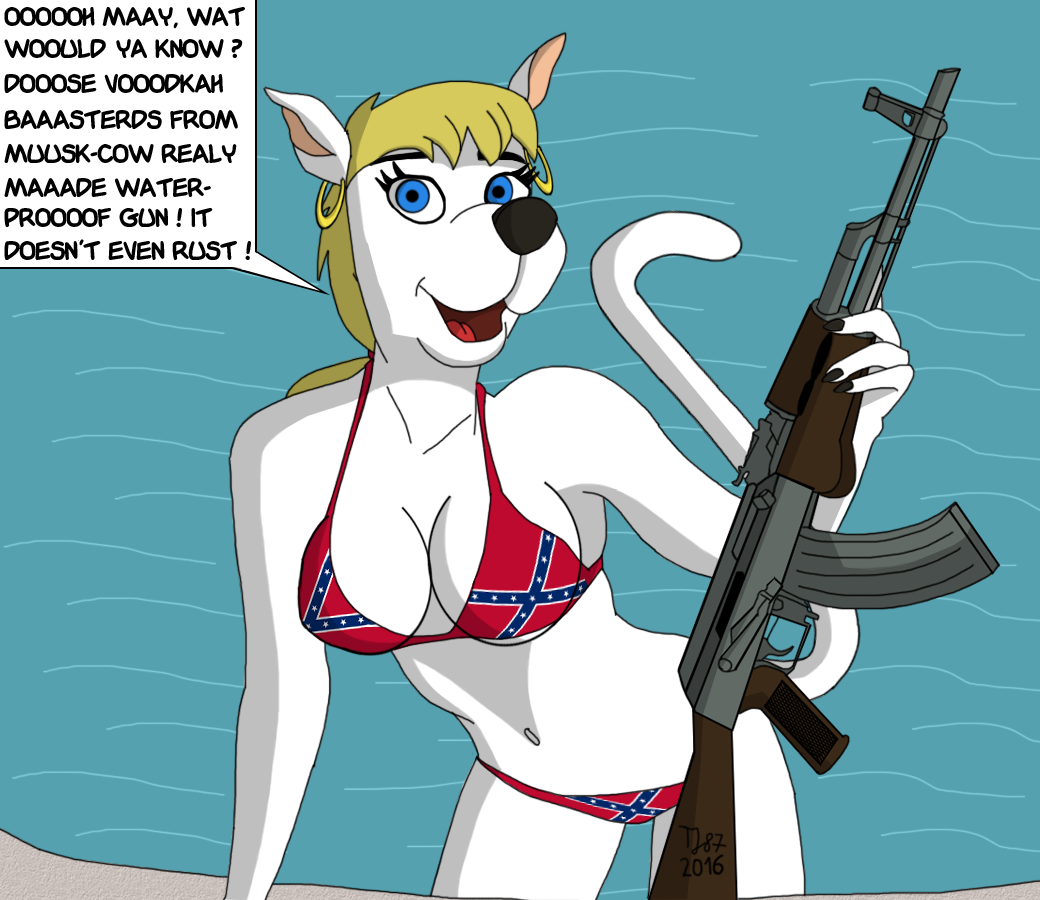 Out of all the characters I've been drawing since 2007, Scooby Dee hasn't been appearing in pictures as frequently as her feline colleagues do, though I like her as much as Penelope Pussycat or Delilah. This year I've drawn her with Mona http://www.fanart-central.net/pictures/user/TeeJay87/848454/Lil-Ol-Pollution and with Doltie http://www.fanart-central.net/pictures/user/TeeJay87/849169/Dolt-on-ism-Southern-Fried-Dolt , so it's about time Edith Doo (guess that would be her official name in identity card or passport) got her own portrait.

- humanoid body, similar to the Pussycats and their friends;

- blonde hair, just like Penny, Mona, Delilah or Callie have;

- round earrings and thicker eyeliner (another features Dee adapted from the Pussycats);

- underlined Southern accent of American English (diiirectly frooom lil' ol Georgia !). According to evidence obtained from my American pen friends' testimonies and the book "Fort Bragg" by Ed Ruggero, people living in the former CSA tend to stress accent on vowels in spoken language, just like Dee is doing in my picture.

I've intentionally picked for her swimsuit with Confederate States of America flag - both from the same reason Dee is speaking in Dixie slang and because due to her canine species, she's not looking convincing in leopard print bikini ("Oooh may, ah feel like muh lil ol' kittie frens !"). I could've dressed her in one of those US armed forces camouflage patterns swimsuits or allied ones, but those wouldn't make such variety.

Scoob's Dixie cousin is bathing in a pool around Tybee Island, GA (her homeland) https://tybeeisland.com/ ; most probably it's part of her family manor near Savannah.

Nice one, but I especially like the angle of her pose and the southern accednt of course :)

I'm not fully convinced about the bottom part of her Dixie bikini - its left side is supposed to be covered by AKM Dee is holding, though it may not look naturally.

She is speaking with such Southern accent, least in original English version http://www.toon.is/the-scooby-doo-show-2x04-the-chiller-diller-movie-thriller-video_8de03c31e.html ; in our dub, her voice actress Joanna Węgrzynowska speaks literature Polish, which spoils the charm of the original version. In my opinion, the dub would've been more accurate if Mrs. Węgrzynowska tried to imitate one of our local Polish dialects, such as:

- or Kashubian (dialect of Pomeranians, when spoken fast, it sounds different than Polish).

Guess the reason they hadn't picked the latter were the differences between literal Polish and Kashubian, most of kids wouldn't understand 3/4 of words. But the remaining 2 options wouldn't have been a bad choice - those would preserve Dee's rural heritage through translation of the episode.

PS. I've been curious and I tried to check the episode with Scooby Dee in Hungarian - apparently it's named "A Scooby Doo-show: "A mozi fantomja" https://hu.wikipedia.org/wiki/A_Scooby-Doo-show , though I couldn't find the video in Hungarian. Wonder how do the characters sound in your language ?

Well, I can show you that, because I've found the whole episode on indavideo (it's a similar video storage like youtube, but maintained by the biggest online portal in Hungary, the Index): http://indavideo.hu/video/A_Scooby-Doo-show_S02E04_-_A_mozi_fantomja_hq
Unfortunately, there is nothing special in her speech, Mrs. Erika Kiss also speaks the literature Hungarian.
However Scooby-Dum's speech (voiced by Károly Gesztesi) sounds more like a Dixie-one, but it only comes from imitating a dog-like speech, just in case of Scooby's.

Having opened the link, I get the message, that this video isn't available outside Hungary.

I'm sorry to hear that.
Unfortunately I have never tried it out outside Hungary, but I had similar experience with another site that woked here, but I couldn't open when I was not in the country :S
I don't know why they block sites just like that, or why is it good for the editor's of the site :(

I'm sure if William Hanna and Joseph Barbera had made additional "Scooby Doo" episodes with Scooby Dee, those wouldn't had been bad ones.

i don't think she was in the ones with the pups

So those two caps from "Homeward Hound" :

are supposed to be fake, right ?

not sure they never mentioned her by name?

is she talking about kalashnikov?

Not about Mikhail Kalashnikov in person - she means those firearms he "developed" from German Sturmgewehr 44 https://es.wikipedia.org/wiki/Sturmgewehr_44 rifle shortly after World War 2 came to an end. Evidence outside Wikipedia are here http://web.archive.org/web/20090222175015/http://casusbelli.com.ar/tierra/ak47(2).htm and here http://www.washingtonpost.com/wp-dyn/content/article/2010/10/29/AR2010102904009.html


Despite AK, RPK, PK and their derivatives are nothing but simplified rip-offs from mechanism invented by Hugo Schmeisser from Haenel group, those guns are indeed that reliable; even covered with mud, snow, dirt or water, they're still able to open fire at tremendous rates.

Nice! The flag at Bikini is what country?