Jihad against Copyrights by TeeJay87 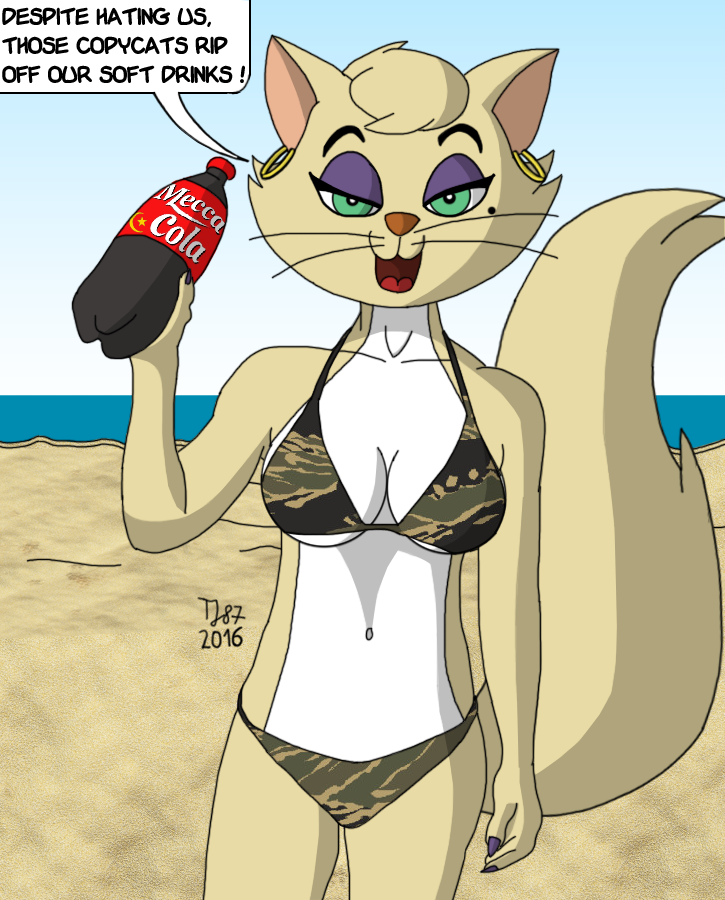 Delilah is presenting one of many proofs for Middle-Eastern hypocrisy - Palestinian-developed Coca-Cola rip-off named after Muslim top-notch holy place https://en.wikipedia.org/wiki/Mecca-Cola . You may have noticed she has similar detailed eyes like Penelope http://www.fanart-central.net/pictures/user/TeeJay87/852413/Pistol-Penny-2016


Economical rivalry and fair competition have been essential parts of properly functioning capitalism since 17th Century and this mechanism hasn't changed much during 400 years of development, even despite crazy leftists claim the opposite. Thanks to such competition, you have possibility to choose from variety of products available in markets, especially soft drinks - from commonly available Coca-Cola and Pepsi to regional products, such as our Polish Polo-Cockta and similar brands. Not that I'd approve unlimited consumption of those beverages - apart from being rich in calories, combination of carbon acid (H2CO3) and Phosphoric Acid V (H3PO4) isn't healthy for everyday drinking. Still, occasionally those fizzy drinks may be helpful, if you need caffeine boost without drinking coffee or while having digestion issues. I've also heard about military enthusiasts, who use Coca-cola to clean rust from bayonets, steel helmets or similar items, though I'm not fully convinced about efficiency of that method.


Back to the main topic - it's understandable that "peaceful" Muslims from the Middle East feel need of competing with worldwide brands, despite their leftist-oriented oriental nature. But merging religion with free-market sounds strange at best, if not simply disgusting - as if spiritual beliefs had market value and possibility to be sold. We had such incidents in Christian world:

- Jesus Christ in New Testament has expressed His disappointment with people opening bazaar in front of the temple;

If someone tried to sell beverages like "Jesus Cola", "Vatican Cola", "Wittenberg Cola", "Nazareth Cola", "Jasna-Góra-Cola" or something like that, such brands wouldn't find customers - leftists would view such as "expansion of religion they oppose" and normal people would be simply disgusted.


Apparently, those moral rules don't apply to fans of Jihad, since they admit to have Mecca Cola (named after Muslim sanctuary city) and Zam-Zam Cola (after holy well from Quran).
Now think: since Muslims count their religion into money, especially US Dollars (currency of the country they call "The Great Satan", which somehow doesn't forbid them appreciating "great satanic money"), why don't they announce financial price of having their society converting to less-violent and less-self-contradicting religion like Christianity ?

Funny thing that I have heard about Mecca-cola, when I was just browsing about Coke-copies around the world.
I remember that the worst cola I have ever tasted was the Romanian ETI-cola, that did contain sugar and artificial sweetener as well, but it was as bad as I have challenged my brother for drinking it all (I won anyway, but I have not enjoyed the victory at all :D ).

Mixing sugar and artificial sweetener in one beverage must cause horror for taste buds. xD


When they issued Coca-Cola Zero, I did taste it out of curiosity - it's better than Coca-Cola light, but still tasting somewhat synthetic. Anyway, those diet fizzy drinks are even worse than regular versions due to aspartame used instead saccharine https://en.wikipedia.org/wiki/Aspartame , being potential cancer factor and migraine causer.

I agree, those (let us call) "artificial-cokes" and other fizzy drinks taste much worse with any kind of sweetener, even with stevia.
Recently I have just tasted Coca-Cola Life, which is made half sugar and stevia, and just because of the unusual taste of stevia, it was... well, kinda weird, but still better than Zero :D
In any case I would rather stay at the regular one, even that it is not made of sugar for a long time, but glucose-syrup :)

Let's hope these muzz get fat and very ill with their mecca caca cola!   LOL

Maybe if they have more people with diabetes within their terrorist organizations, they'll give up killing innocent Christians and Jews in the Middle East. ;)

No wonder Western leftists are so fond of Islam - both tend to eat like slobs and oppose the same values. xD

Yes, that's true. ;-)
I wonder what kind of water they put in their evil mecca caca cola.
I can remember that once you posted here in FAC the definition of "pure water" according to muslims.... LOL

Knowing their hygiene habits, that water must be polluted with certain substances (perhaps oil from the Persian Gulf ? LOL ), which would qualify it as not drinkable. ;)

Finally I was able to find back your link.
It was about these elementary principles of hygiene taught by momo the great, their wise and erudite prophet!
link: this video:     https://www.youtube.com/watch?v=E43rJVeuWzc
Muhammad on Personal Hygiene (Science and Islam)     LOL

The same applies to Muhammad's vision of peace - a peace through bloody war. Or the famous "Muslim chivalry towards women", with females demoted into objects.


If the world hadn't been filled with stupid people defending hypocrisy, those fans of Allah would've made excellent clowns in circus with their self-contradiction. I can even imagine "Gaza Desert Circus" as rival of Moscow State Circus http://moscowstatecircus.com/ ;)

One company is chasing another one in the pursuit for customers' money.

Guess that's because of Delilah's presence.