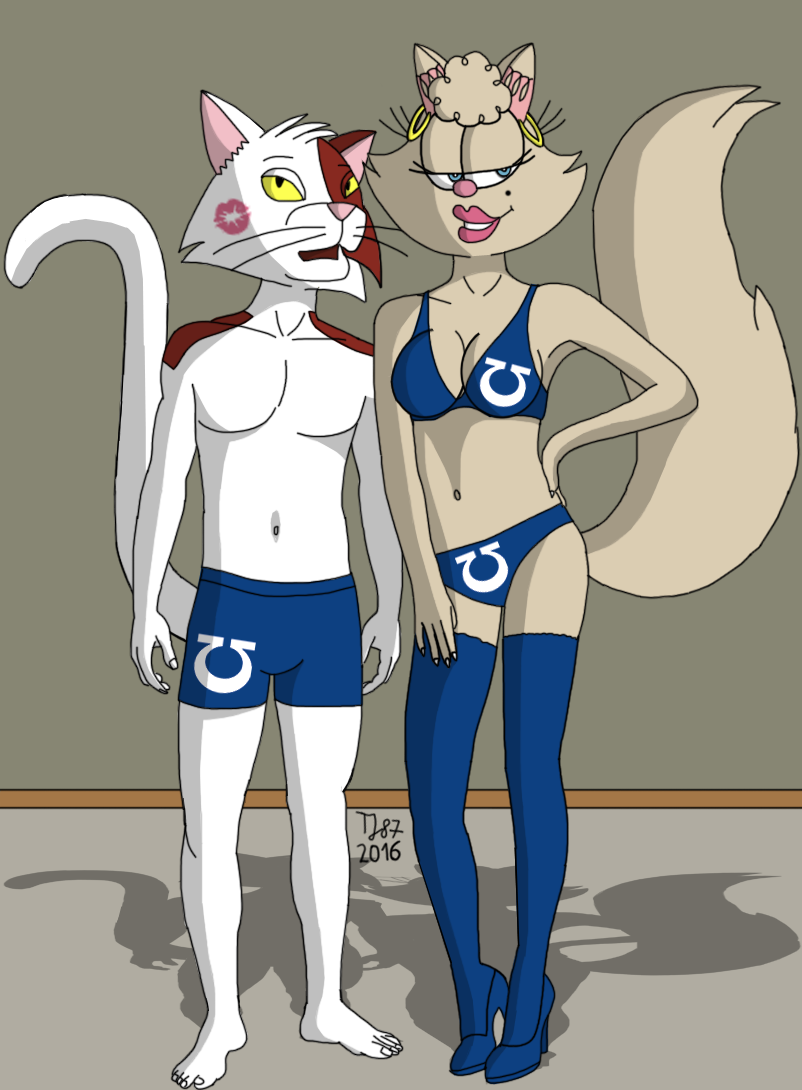 Penny, Mona and Stan have recently been watching a movie about Ultramarines https://en.wikipedia.org/wiki/Ultramarines:_A_Warhammer_40,000_Movie with John Hurt, Terence Stamp, Sean Pertwee and Adam Harwey. Couple of days later, when they were browsing Ultramarines merchandise, Penny found lingerie with the unit emblem, so they're trying it on.


Stan asked Penny about the idea of merchandising on such (quite ridiculous) level and he got a smooch in return. Mona is probably testing her Ultramarine female set with different hairdos, thus she's not present in the picture.


Apart from drawing the couple, this work is supposed to be satire about the common trend inside companies like Games Workshop, when they do their best in reaching customers, often in hilarious ways. If you google "Ultramarines merchandise", you should see available on sale space marine figurines, books and games, but also T-shirts with Ultramarine emblems, dices for tabletop games https://www.games-workshop.com/resources/catalog/product/600x620/99220101007_UltramarineDice03.jpg and even coffee mugs. I've heard about certain other companies going that far, that they issue lingerie promoting their products.


Unlike leftists, I'm not trying to claim that such mechanisms deserve being purged - without those, capitalism wouldn't be functioning. Just I view such exaggerated promo materials as a way of draining people's wallets; pretty much like PAWS Inc. demands quite much for Garfield and Friends animation cels https://garfieldcollectibles.com/.


Though you have to admit, Ultramarine lingerie is underlining Penny's eye colour.

The reversed omega symbol may look strange on Stan, but the blue color is underlining Penny's pupils. ;)

You will have to create your own line of lingerie and accessories! ;-)
Perhaps proposing several shades of blue,
and maybe including "ultamarine blue", which is a lovely blue too. ;-)

Ideal lingerie should match the wearer, just like any other clothing.

Penny in ultramarine blue is one example, another one is Vassilisa Effendi trying to make others jealous with his dress code http://www.fanart-central.net/pictures/user/TeeJay87/850803/Fashion-Folly-2-version-2 xD

what a sexy pin-up!  LOL
That was great fun and a really excellent artwork. :D

Vassily is only missing his harem veil introduced in October 2016 http://www.fanart-central.net/pictures/user/TeeJay87/851848/Vassily-What-Have-You-Done- ; leopard print pattern would conceal his silly face expression. ;)

Stan may look quite odd - he's supposed to be surprised with unexpected kiss. ;)